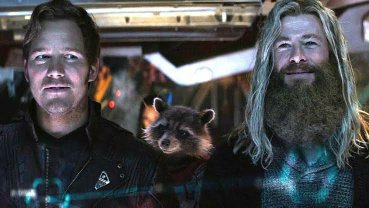 The first set photos from Thor: Love and Thunder reveal a new look at Thor and other characters.

As reported last week, Thor: Love and Thunder officially began filming in Australia. The Marvel Cinematic Universe‘s fourth installment of the Thor franchise will be directed by Taiki Waititi from a script co-written by him and Jennifer Kaytin Robinson. Waititi’s Thor: Ragnarok served as a fresh new take on Chris Hemsworth‘s character. Love and Thunder will be the continuation of Thor’s journey with an appearance from the Guardians of the Galaxy.

The production’s first set photos reveal Thor’s new look, and it gives fans a glimpse at Chris Pratt’s Star-Lord, Karen Gillan’s Nebula, and Sean Gunn’s Kraglin. You can check out the set photos below:

The images show Hemsworth’s Thor sporting a more casual-retro outfit inspired by Tom Defalco‘s The Mighty Thor: ThunderStrike comic book series. It can be noted that Thor’s physique changed drastically compared to the character’s previous appearance in Avengers: Endgame. After the sensation that was “Fat Thor”, it can be confirmed that the God of Thunder will be back to his old self, physically speaking. Whether his transformation is shown in the film or if it takes place off-screen in between the two films, remains to be known.

The set photos also show Kraglin using Yondu‘s fin to control the Ravager‘s lethal arrow after inheriting the weapon during Guardians of the Galaxy Vol. 2. Since Sean Gunn’s arrival to Sydney was reported, it has been speculated that Rocket Raccoon would be part of the film. Alongside playing Kraglin, Gunn is also the motion-capture actor for Rocket. Bradley Cooper could voice the character during post-production if he doesn’t end up making the trip to Australia. Chris Pratt’s Peter Quill has a fully-grown beard, maybe with some banter from Thor included. As for Nebula, it can be said that she stayed with the Guardians after Thanos‘ demise.

What else would you like to see from the set? What will the Guardians’ role be? Sound off in the comments and stay tuned to The Cultured Nerd for more updates.