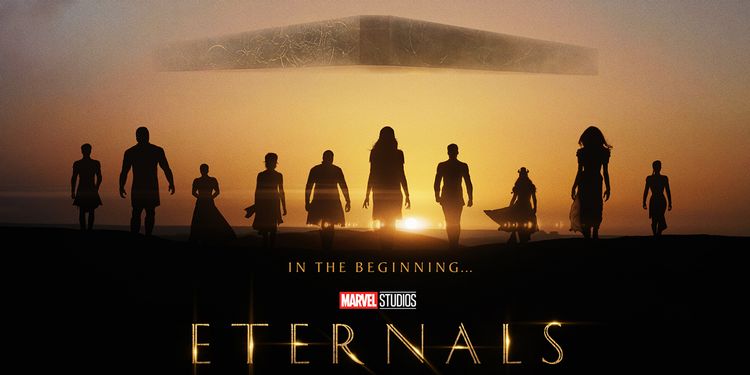 The Eternals has released its first official teaser and poster. The upcoming Marvel ensemble film will fly into theaters on November 5, 2021.

The Marvel Cinematic Universe will take a huge turn with the arrival of The Eternals. The immortal alien race are descendants of the Celestials and they will debut in the MCU on a film directed by this year’s Academy Award winning director, Chloe Zhao. After her triumph with Nomadland, becoming only the second female winner of the Oscar for Best Director, Zhao will lead a massive ensemble of characters from Marvel Comics.

On Monday, Marvel Studios released the first official teaser for the film. You can check it out below:

The film takes place after the events of Avengers: Endgame and it follows the Eternals, who have been hiding on Earth for over 7,000 years, reunite to defeat the evil Deviants and to save humanity. The trailer starts with modern western tone, faithful to Zhao’s style, and it shows impressive cinematography and music. Nevertheless, it does not provide much information on the characters and their journeys. According to the trailer, we should expect some sort of explanation as to why they never interfered before with anything that happened throughout the MCU arc. There is also a small connection to the larger universe at the end where Richard Madden’s Ikaris jokingly candidates himself to lead the Avengers after the death of Tony Stark/Iron Man and after the disappearance of Steve Rodgers/Captain America.

Marvel also released a poster for the film:

The film stars Gemma Chan who plays her second role in the MCU after appearing in 2019’s Captain Marvel as Minn-Erva. She will be joined by Madden, Kumail Nanjiani, Lia McHugh, Brian Tyree Henry, Lauren Ridloff, Barry Keoghan, Don Lee, Kit Harington, Salma Hayek, and Angelina Jolie, among others.

Variety described the characters as follows:

“Eternals” is primarily an ensemble film. However, MCU producer Kevin Feige told Variety that if there had to be one lead character, it would Gemma Chan’s character Sersi. Posing as a museum curator on Earth, Sersi is an empathetic Eternal who possesses the ability to manipulate matter.

Richard Madden plays Ikaris, the all-powerful leader of the Eternals who can fly, shoot beams of cosmic energy from his eyes and has super strength. Angelina Jolie play Thena, a warrior who can create any weapon out of cosmic energy.

Marvel Studios have recently been very active trying to get their projects on the road. They will try to ride the wave of momentum and success they gathered with Disney+‘s Wandavision and Falcon and the Winter Soldier towards their theatrical films. They are preparing for Black Widow’s release in July, and they already released the first trailer for September’s Shang-Chi and the Legend of the Ten Rings. They also released a promotional clip for their theatrical projects, which included an updated list of the release dates.

The Eternals will fly into theaters on November 5, 2021.

What did you think of the trailer? Are you looking forward to this film? Comment below and stay tuned to The Cultured Nerd for more updates.