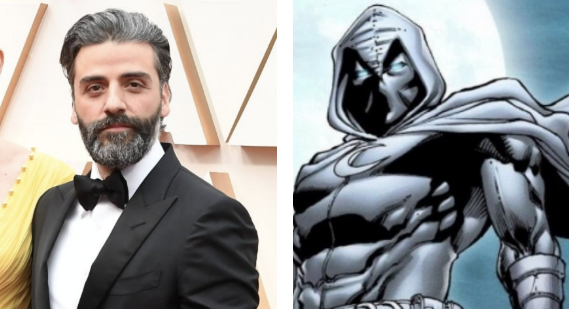 It’s looking like Oscar Isaac has been tapped by Marvel Studio’s to star in the upcoming “Moon Knight” TV series for Disney+. The Casting has not been officially confirmed but multiple outlets are saying that Isaac is at the top of the list for nabbing the role of anti-hero “Moon Knight” aka Marc Spector.

Multiple outlets are reporting that Oscar Isaac is in talks to star in the lead role in the new Marvel series Moon Knight for Disney+.

After a five year, three movie run with the Star Wars franchise, Isaac is ready to dip his toes into the Marvel Cinematic Universe. He famously played the outspoken resistance fighter, Poe Dameron. No stranger to superhero films, you may remember Isaac appearing as the big blue villain in X-Men: Apocalypse in 2016. Other notable roles included Inside Llewyn Davis, Ex Machina, Drive, and A Most Violent Year.

Moon Knight, aka Marc Spector, is an ex-marine turned mercenary who has to juggle multiple alter egos that can aide in his crime fighting. Two of his lead personalities include are a lonely cab driver named Jake Lockley and a wealthy playboy named Steven Grant. The character first appeared in the comic Werewolf by Night #32 in 1975. Later on, after having his own comic series, and background story developed, it was said that Spector turned to a life of fighting crime after becoming a vessel/conduit for the Egyptian moon god Khonshu. The most recent iteration of the anti-hero has him sporting an all white suit, going by the name Mr. Knight, of course.

The Disney+ series is being developed by writer Jeremy Slater, best known for his widely popular Netflix series The Umbrella Academy. Slater has also penned the scripts to films such as 2015’s Fantastic Four, Netflix’s Death Note, and horror-drama The Lazarus Effect. Slater will serve as head developer and writer for the Moon Knight series.

This upcoming series is just one of many that are deep in development and even a few that are nearly finished and in line to premiere like WandaVision, and The Falcon and The Winter Soldier. Other upcoming MCU Disney+ series include Loki starring Tom Hiddleston, Hawkeye starring Jeremy Renner, and Ms. Marvel starring newcomer Iman Vellani as the titular character. A Nick Fury series is also in the works, with Samuel L. Jackson expected to return as the lead.

Marvel is still searching for a lead director and there is no production schedule set as of now. Kevin Feige will executive produce the series, like every other MCU property. Marvel Studios has also not yet commented on the casting rumor.

Isaac has a handful of projects lined up for next year including Denis Villeneuve’s Dune, Paul Schrader’s The Card Counter and he just recently signed on to star in the HBO limited series Scenes from a Marriage. Isaac is represented by WME, Inspire Entertainment, and Goodman Genow.

How do you feel about this casting choice for the Moon Knight series? Who do you think should direct the project? As always, let us know in the comments below or join in the discussion on the official TCN Twitter.