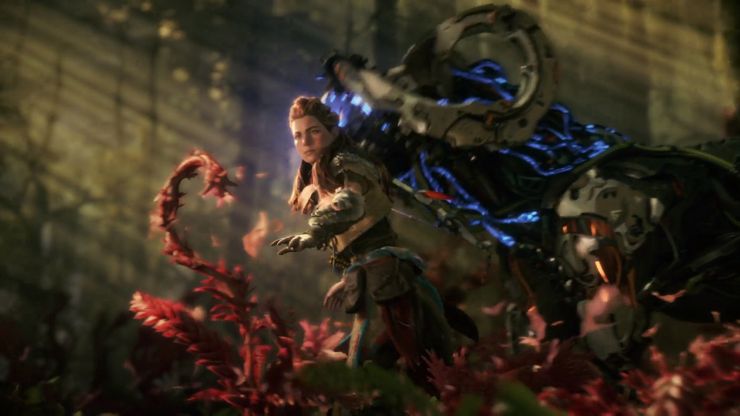 Yesterday morning, Guerrilla Games shared with us two new screenshots of the upcoming PS5 exclusive, and they look amazing.

Since its announcement last week, we are seeing and learning more and more about Horizon Forbidden West. Yesterday morning, Guerrilla Games shared two new screenshots of the upcoming PS5 exclusive, and they look amazing.

Guerrilla Games shared the screenshots on their Twitter account, and they show us what we can expect when the game hopefully releases in 2021. In the screenshot on the left, we see a crashed plane that looks like it sitting on top of a waterfall, and it looks like it could almost be falling over. There’s also some greenery covering the plane that shows it’s been there for a long time. It also shows us a couple of Sunwings flying around–maybe this is one of their habitats in the game?

In the second screenshot, we see Aloy looking at something off in the distance. Although its not clear what she is looking at, we can probably guess it’s a giant robot we’ll have to fight at some point, because who doesn’t love a good challenge? This is my favorite of the two screenshots because the desert scenery looks absolutely stunning. The detail is all there, and you can even some of the sand blowing in the wind off in the distance. The glare from the sun is a great touch as well.

One of the game developers on Horizon Forbidden West recently talked about what new things players can expect when they finally get their hands on the game. Everything from new enemies to new beautiful locations is discussed. If there is more you’re wanting to learn about the game, then check out the video uploaded by the Playstation Youtube Channel below:

Horizon Forbidden West is expected to release exclusively on PlayStation 5 in 2021.

Are you excited for Horizon Forbidden West? What do you think of the two new screenshots of the game? Let us know in the comments below!