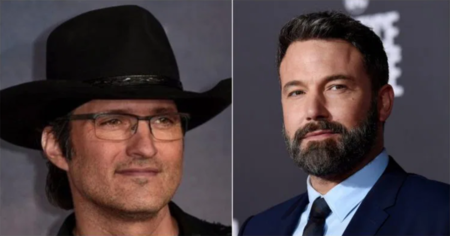 Solstice Studios’ Hypnotic, directed by Robert Rodriguez and starring Ben Affleck and Alice Braga, will have cameras rolling this September in Austin.

Robert Rodriguez has many exciting projects on the way. The acclaimed director known for films like Sin City, Spy Kids, Machete , From Dusk Till Dawn, and the Mariachi trilogy has experienced recent success with Alita: Battle Angel, Netflix’s We Can Be Heroes, and with an episode from The Mandalorian. Nonetheless, one of his most promising projects will start production soon.

Deadline has confirmed that Solstice Studios‘ Hypnotic is expected to begin production on September 20 in Austin, Texas. Rodriguez will direct from a script co-written by him and Max Borenstein (MonsterVerse films). Austin is the headquarters of Rodriguez’s Troublemaker Studios and he resides in the city. Robert Rodriguez is known for working with great actors and filmmakers, including Quentin Tarantino, but for this project he will add a couple of new names to his impressive list of collaborators… Ben Affleck and Alice Braga.

You can read the project’s synopsis below:

The action thriller will follow a detective who becomes entangled in a mystery involving his missing daughter and a secret government program while investigating a string of high-end crimes.

Affleck has been attached to the project for a long time already. Cameras were supposed to begin rolling on April 2020, but the COVID-19 pandemic and an issue with the insurance company forced filming to be delayed. Solstice will now be looking to produce and distribute the film as soon as possible since Deadline confirmed that the studio already sold the film well into international markets and is due to release in the U.S. They also confirmed that the COVID insurance issues have been resolved.

This will be the latest project from Solstice Studios. They released the first theatrical feature after cinemas reopened, last Summer with Russell Crowe’s Unhinged. They lost the distribution rights for Gerard Butler’s The Plane and Mark Wahlberg’s Joe Bell, but they are hoping to stick the landing with Hypnotic.

Ben Affleck was recently featured in Zack Snyder’s Justice League on HBO Max. He is expected to film his scenes as Batman/Bruce Wayne for The Flash sometime soon. His other upcoming films include George Clooney’s The Tender Bar for Amazon, Ridley Scott’s The Last Duel and Adrian Lyne’s Deep Water. He is also working on a couple of directorial projects which are yet to be officially confirmed.

Alice Braga is mostly known for her role in City of God and for starring in USA Network’s Queen Of The South series, as well as Luca Guadagnino’s limited series We Are Who We Are. She voiced Counselor Jerry A in Pixar’s Soul, and she appeared in The New Mutants. She is also part of the star-studded cast for James Gunn’s The Suicide Squad, releasing this August.

Hypnotic will be produced by Rodriguez, Studio 8 CEO Jeff Robinov, Studio8’s Guy Danella, and John Graham, alongside Solstice Studios. The film has no release date yet.

Are you excited for this collaboration? Comment below and stay tuned to The Cultured Nerd for more updates.