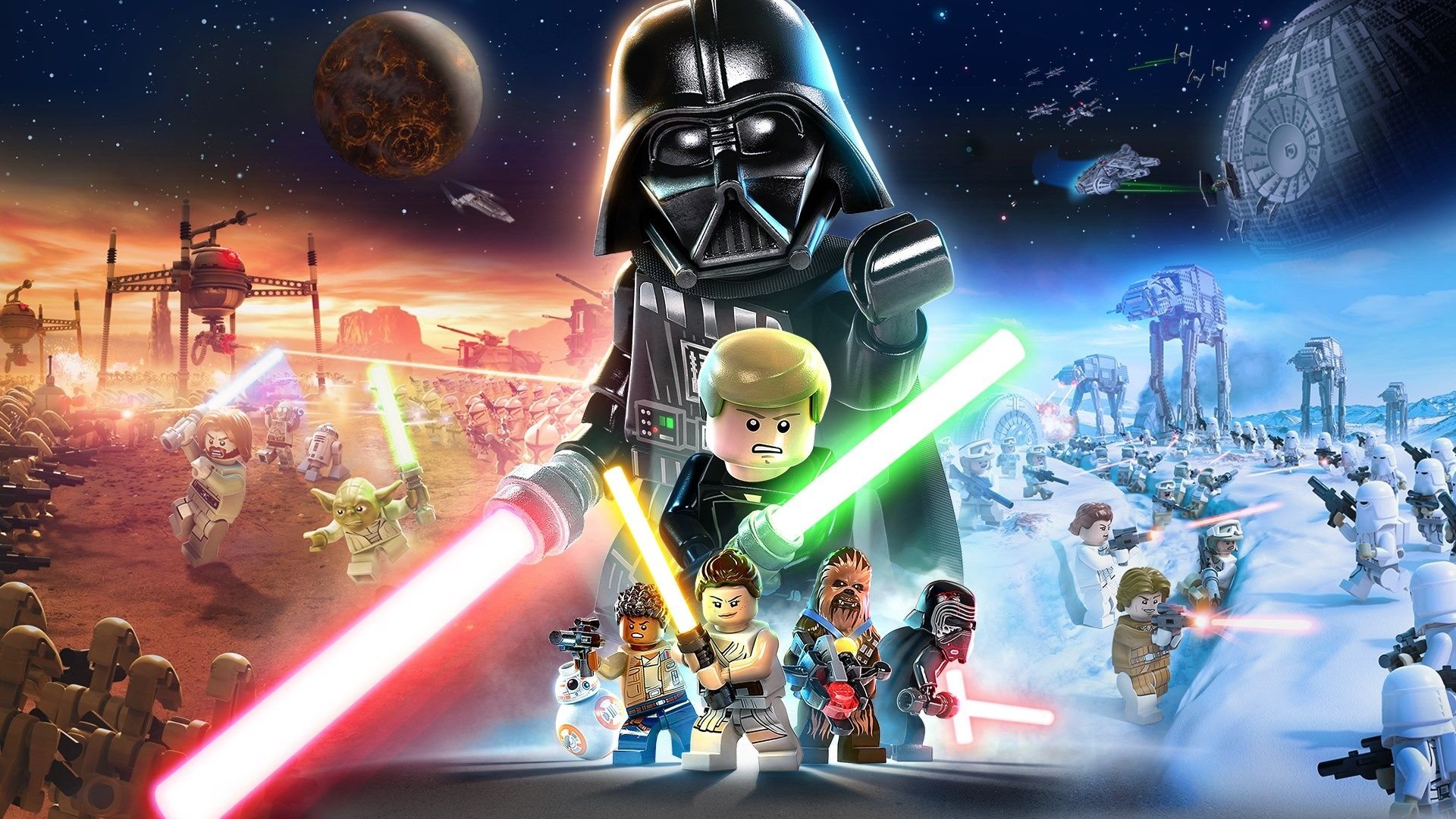 “LEGO Star Wars: The Skywalker Saga” pays homage to the franchise in fun and exciting ways, but the game’s noticeable flaws weigh it down just a bit.

LEGO Star Wars: The Skywalker Saga is certainly the most ambitious LEGO game to date. Spanning all nine of the titular Skywalker Saga films, as well as offering 24 new planets to explore and 384 playable characters available in the base game alone, it is LEGO’s biggest project to date. As both a fun retelling of the iconic Star Wars films and a game paying reverence to the franchise’s many characters and worlds, LEGO Star Wars: The Skywalker Saga excels as an adaptation of the beloved Star Wars franchise. However, while this may be the quintessential game for Star Wars and LEGO fans alike, the game has a few issues, mostly pertaining to unfixed bugs, that hold it back.

The Skywalker Saga is one of the most sprawling film series in history, spanning three generations of trilogies with plenty of iconic characters. It is certainly a tall order to try and capture the magic of all nine films in a single game, but TT Games did a solid job of whisking players off to the galaxy far far away. Episodes have five levels each, totaling 45 levels in total. Unlike 2007’s LEGO Star Wars: The Complete Saga, where players have to fill in the gaps in narrative between the levels, episodes in The Skywalker Saga feel have brief transitions between levels—short exchanges of dialogue or activities for players to do before they go to the next “official” level. This makes the episodes feel like they flow more cohesively; they don’t feel choppy, as can be the case with some other LEGO games for players unfamiliar with the respective franchise.

However, while the story might flow well enough, the pacing certainly felt like it could have been better. Some Skywalker Saga levels, such as the battles of Geonosis and Endor, are much shorter than their Complete Saga counterparts and this becomes apparent when some of the episodes are able to be completed in an hour or less. On top of this, there were even some missions that I feel should have been included but weren’t; a couple of these missed opportunities include the space battle over Coruscant in Revenge of the Sith and the destruction of the Death Star II in Return of the Jedi. In this regard, the game can feel a bit underwhelming at times, as there was a lot of potential to include more in the mainline missions.

That being said, I still had lots of fun playing through the game. LEGO games tend to have a light sense of humor and LEGO The Skywalker Saga is no exception. The Star Wars films can have some dark moments, but the way in which this game handles those darker scenes is excellent. Told with just enough nuance for kids to understand the narrative without the somewhat more mature elements, the game takes the Star Wars story and makes it an enjoyable retelling that is both adjusted for younger gamers and true to the saga for older fans. Playing through each episode felt like a love letter to Star Wars from TT Games and LEGO and their passion for the franchise shines through in their silly, yet ultimately faithful depiction of the Skywalker Saga.

This LEGO game might be the best yet in terms of visuals. A major part of the game is the set design of the various planets and locations, and TT Games did an excellent job of capturing the various settings of the Star Wars galaxy. I felt like some of the planets were practically brought to life and in excellent detail. The character models in the game are also the best of any previous LEGO game. I liked how all the different characters reflected the light and environment in cutscenes like actual, plastic, LEGO minifigures do. Additionally, mixing LEGO-built items in the levels and the free roam environments felt natural, with some of the indoor environments even made entirely of LEGO bricks. This mixture of plastic LEGO pieces and characters in realistic environments is not new to LEGO games, but the way it is presented here is seamless.

LEGO Star Wars: The Skywalker Saga features a new style of gameplay for LEGO in what is essentially over the shoulder third person. The game feels more like a shooter than any LEGO game did before, and it works well for the wide variety of blaster wielding characters in the game. Also implemented are buildable barricades in levels that allow players to take cover from enemy fire. While the AI is certainly not challenging enough for this cover system to be a necessity for any encounter, it does add a nice dynamic touch to gameplay. Lightsaber and close-range weapon-wielding characters are also touched up, as players can create combos with these character attacks beyond the basic button mashing of previous LEGO Star Wars games. These new controls contribute to the game’s combat in a way that allows for some more variety for older players while also not being too difficult for kids to grasp.

The sound design of the game is excellent. The Star Wars franchise is acclaimed for its iconic music scores, and LEGO The Skywalker Saga puts the legendary music of the film series to good use. Whether it is being used to increase the tension of a cutscene or encounter or to contribute to the ambience of a planet in free roam, the music of the game is a standout, as is always the case with any Star Wars project. Voice acting in the game is also done excellently, as a lot of the voice actors not only sound similar to their movie counterparts but also come across as funny and exaggerated versions of their characters. With so many different characters and ships in the game, the many blasters, lightsabers, and starfighter weapons all sound unique and distinguishable, further immersing the player in this faithful Star Wars experience.

Beyond the nine episodes, LEGO Star Wars: The Skywalker Saga has a solid amount of replayability. As mentioned before, there are plenty of planets to freely explore in the game, and each is loaded with side missions to complete. From an epic Krayt Dragon boss fight on Tatooine to chasing down some dine and dash customers for Dexter Jettster on Coruscant, every planet is rife with activities for players to do. Each mission unlocks new characters or ships that were not unlocked from the main episode campaigns; ranging from Salacious Crumb to a Wampa to Yaddle, the game has a vast selection of characters to choose from. Additionally, levels and free roam planets feature puzzles to collect Kyber bricks. With over a thousand in the game, this currency can be used along with another rare collectibles—datacards—to access a host of modifiers that can be zany, like one that replaces lightsabers with baguettes, to useful, like multipliers for studs, the main currency to purchase characters in LEGO games.

While LEGO Star Wars: The Skywalker Saga is one of, if not the best LEGO game to date, there are still a lot of issues with bugs that need to be mentioned. In the past 2-3 weeks since I have played the game, it has crashed randomly about a dozen times, forcing me to restart it. On top of that, one of the missions in Episode II, a chase with Zam Wessel, had issues where the entire screen went white, yet the audio was still playing; again, I needed to restart my game for it work properly. Another major issue I have had is that if I ever change one of my two characters to a protocol droid in free roam, I cannot change the droid back to another character unless I travel to a different planet—an odd bug that always happens to me without fail and which has gotten extremely annoying to deal with every time a protocol droid puzzle comes up. All these bugs in the game certainly detract from its overall quality.

Overall though, LEGO Star Wars: The Skywalker Saga is a great game for Star Wars fans of all ages. With any LEGO game, I would hesitate to pay full price, but LEGO The Skywalker Saga certainly lives up to the hype. There is a lot of content in the game, with well over 300 characters to try out, plenty of environments to explore in detail, and activities to complete, not to mention the condensed yet faithful adaptation of the titular film series. I would highly recommend this game as the pinnacle of LEGO adaptations, however it should be noted that any player will inevitably run into bugs with the game. If that is a problem, it might be best to wait when the game is on sale, or until the developers release an official patch to resolve major issues. While these bugs unfortunately weigh down LEGO The Skywalker Saga, I want to again stress that it is a great game and certainly worth playing.