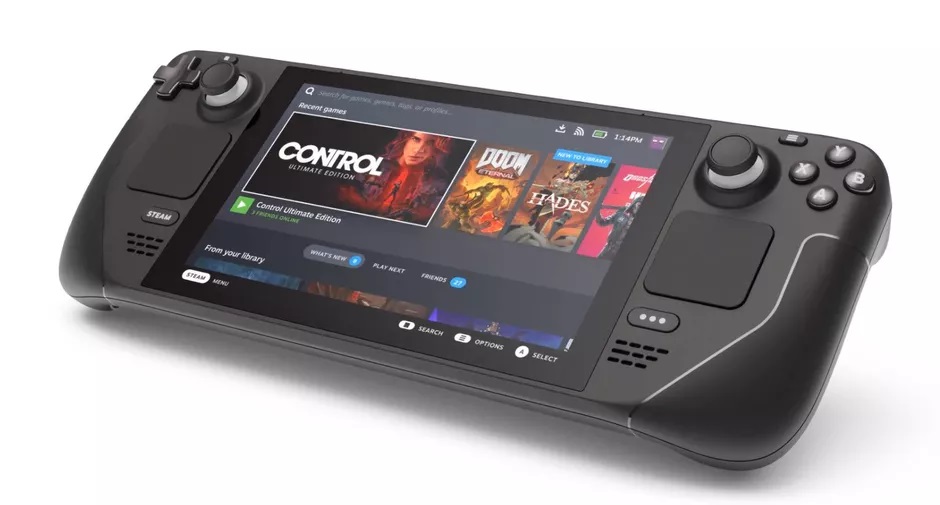 Valve has revealed their new portable gaming system: The Steam Deck. Here’s everything you need to know.

Valve has officially revealed their new handheld gaming PC arriving later this year: The Steam Deck. Featuring a 7″ display screen, full-sized controls, and a custom APU, gamers will be able to play their favorite AAA games wherever they please. Here’s a summary of everything we know so far.

There will be three different models of the Steam Deck available for purchase. The only real difference between them is storage size and faster speed. The base model is equipped with 64GB eMMC memory and will cost $399, while the two models after that are equipped with faster NVMe SSDs with either 256 GB of memory for $529 or 512 GB of memory for $649. Each model will also support expanding your storage via microSD cards. All models of Steam Deck share the same graphic capabilities, featuring 720p native resolution, and possess 16 GBs of RAM.

In terms of battery life, you will get about 2-8 hours of game time, depending on what you’re playing. You’ll also need a stable internet connection to download games as the system is Wi-Fi-only.

The Steam Deck will weigh 669g and measure 298mm x 117mm x 49mm in size. Every model will also come with a carrying case to keep it secure while you’re out and about.

Additionally, the Steam Deck will feature Bluetooth 5.0 support for any controllers, accessories and audio devices you regularly use with a PC. There’s also a built-in dual-array microphone to use for multiplayer chats.

An official Valve Docking Station is also on the way, which will allow you to play your games on a bigger screen. The dock will be sold separately, and there is no official price or release date yet. Output resolution in docked mode will not be limited to 720p, but performance will apparently be impacted if you increase the resolution.

The dock will also feature two USB 2.0 ports and one USB 3.1 port to plug in any peripherals, headsets, controllers, etc.

In an attempt to help ease the limited availability of next-gen consoles due to the global chip shortage, Valve is using a purchase reservation system where people can acquire Steam Decks in a queue-based system as they’re made available.

All in all, although the form factor of the Steam Deck is similar to the Nintendo Switch, the hardware makes it a substantially more powerful system capable of playing AAA games with “high” graphical settings.

Those who were disappointed with the tech-specs of the recently announced Nintendo Switch OLED may have found the “Switch Pro” they were hoping for with the Steam Deck.

For all the details on the Valve Steam Deck, head off to the official website here.