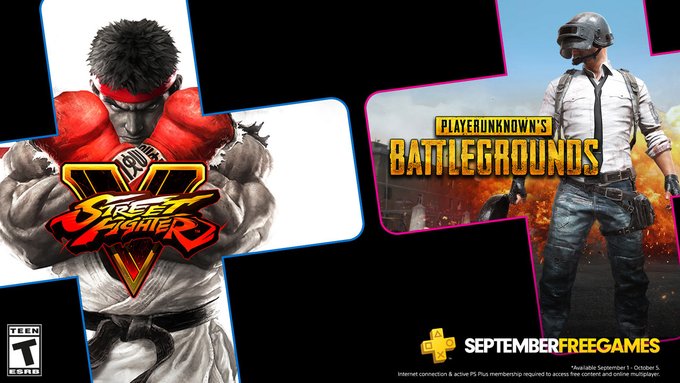 “PUBG: PlayerUnknown’s Battlegrounds” and “Street Fighter V” will be free to download for PS Plus users in September.

September is almost here and that calls for some more free games provided by PS Plus. PlayStation has announced that the popular battle royale game PUBG: PlayerUnknown’s Battlegrounds and Capcom’s Street Fighter V will be free to claim for PlayStation users that have PS Plus. Both PUBG: PlayerUnknown’s Battlegrounds and Street Fighter V will be free to download starting September 1st and will be available until October 5th.

“Launched in March 2017, PLAYERUNKNOWN’S BATTLEGROUNDS (PUBG) burst onto the scene touting a new take on the traditional First-Person Shooter. 100 players are dropped onto a deserted island with nothing as they scavenge for weapons and attempt to be the last person standing.“

“The legendary fighting franchise returns with Street Fighter V! Powered by Unreal Engine 4 technology, stunning visuals depict the next generation of World Warriors in unprecedented detail, while exciting and accessible battle mechanics deliver endless fighting fun that both beginners and veterans can enjoy. Challenge friends online, or compete for fame and glory on the Capcom Pro Tour.”

Below you can watch the official trailers for PUBG: PlayerUnknown’s Battlegrounds and Street Fighter V:

What are your thoughts on this months free game line up? Let us know in the comments!