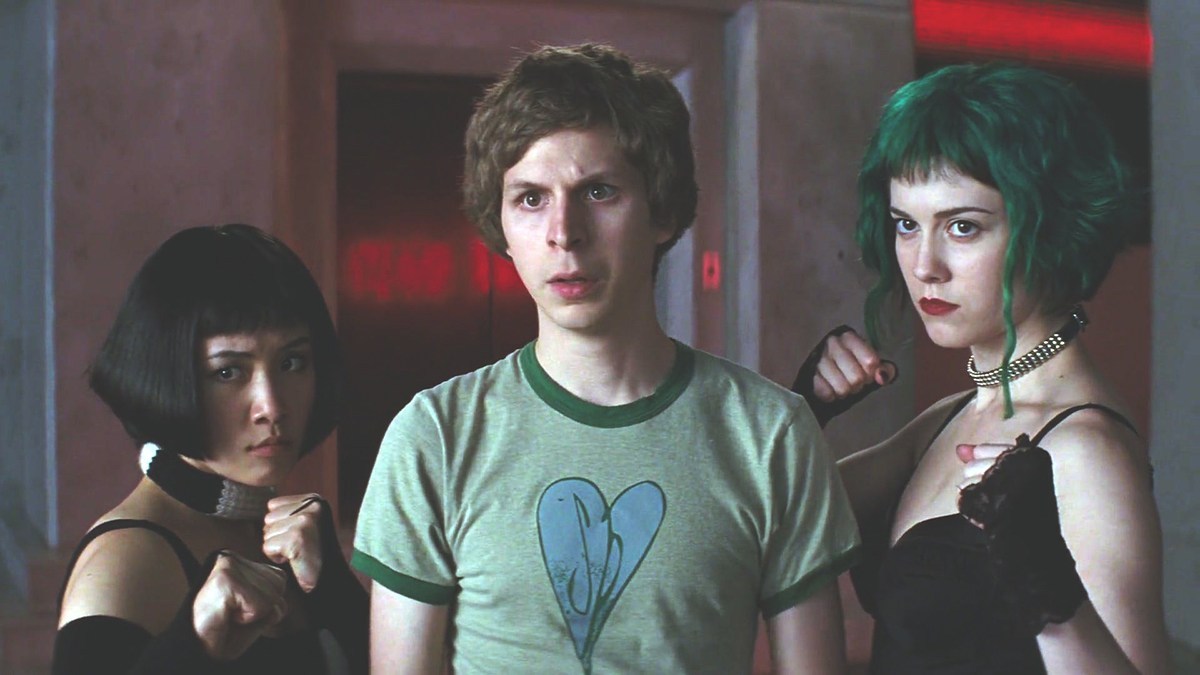 10 Things You Should Know About Scott Pilgrim vs. the World.

Bryan Lee O’Malley‘s instantly classic graphic novel series inspired one of the best film adaptations in recent memory with the addition of Scott Pilgrim vs. the World in 2010. Since then, fans have continued a passionate fanbase for the film and source materials, in anxious anticipation of a possible sequel (for more on that, check here). But for now, fans will have to settle with what we’ve got. For fans of these iconic characters, or newbies curious as to what all the fuss is about, here are 10 Things You Should Know About Scott Pilgrim.

1. Scott’s Tee Is a Reference to the Character’s Origin

Scott’s iconic “Plumtree” shirt is worn during the band’s first gig, culminating in a face-off between Scott and Ramona’s first “Evil Ex” Matthew Patel. Plumtree is actually a Canadian band from which O’Malley took the character’s name. The band’s song titled “Scott Pilgrim” appears prominently on the film’s soundtrack.

Perhaps most obvious with the band’s dry and sarcastic yet lovable drummer Kim, the film had something quite unique going for it. Throughout Scott Pilgrim vs. the World‘s 1 hour and 52 minute runtime, the actors are never seen blinking. Director Edgar Wright used this to add a certain anime affect that made the characters feel more like illustrations in a graphic novel, just like the source material.

Ramona’s seven x’s under her phone number is a catch that few notice for its true meaning on their first watch, however, this isn’t where Wright’s “fun with numbers” ends. Matthew Patel, Ramona’s first Evil Ex, has one chevron prominently positioned on his jacket, while Lucas Lee points at Scott with two fingers, has the Tibetan symbol for “two” tattooed on his neck, and wears a belt buckle with two x’s. Todd Ingram also wears a three-striped shirt with the numeral “3” prominently featured. When we first see Roxy, she has four prominent rips in her leggings. Similarly, the Katayanagi twins both have symbols representing “five” and “six” on their shirt cuffs. Lastly, Gideon’s record label “G-Man Records” has a logo comprised of multiple sevens.

This extends further as Scott, who is not yet an Evil Ex, wears a shirt depicting the word “zero” and consistently drinks Coke Zero, showing his lack of rank among the Evil Exes.

Musical authenticity was of great importance to both O’Malley and Wright during the process of making Scott Pilgrim into a film. To achieve this, the production team reached out to several musicians who became responsible for each band’s music within the film.

Additionally, the film’s production team held “band bootcamps” for those playing musicians in the film in order to teach them how to play. For her role, Allison Pill learnt the drums. Sex Bob-omb’s front man Stephen Stills, portrayed by Mark Webber, had never sung publicly before his role in the film.

If Lucas Lee’s stunt doubles seem almost too well cast for their roles, that’s because they are. Each and every one of the stunt doubles Scott has to fight during his battle with Ramona’s second Evil Ex is played by Chris Evans‘ (Lucas Lee) actual real-life stunt doubles. This added a layer of authenticity to the performance and adds to the utterly unfair fight before Scott.

Scott’s awkwardness and charm are part of what makes the character so great to begin with. He feels real in his dorkiness, and never more so than during his first interaction with Ramona. Early in the film, our protagonist attends a party at Julie’s (portrayed by Aubrey Plaza) where he is instantly enamored with Ramona. Dyed hair and effortless charm—she is the epitome of cool to him. During one of the film’s most iconic scenes, Scott approaches her and tells her about the original name for Pac-Man. It’s an endearing scene, but hardly one that fans necessarily think to be true. But it is!

The classic arcade game Pac-Man was originally called Puck-man, based on the character’s resemblance to a hockey puck. Sadly, the name was changed in American markets to avoid vandalism.

Eagle-eyed cinema goers might recognize this phone number as more “real” than the typical “555” numbers used in most films. This is because the phone number is actually a real number and was purchased by Universal Studios for use in their films. You can see this number appear in Munich, Definitely Maybe, and The Adjustment Bureau.

When the film began production, O’Malley’s graphic novels had not yet been completed, with the sixth and final installment a mere draft at the time of filming. This is unusual for film adaptations and also left the screenwriters (including O’Malley) a lot to figure out when it came to the film’s climax and conclusion.

Originally, Wright’s screen adaptation intended to have Scott end up with the age-inappropriate Knives Chau, rather than fan-favorite Ramona Flowers. This was eventually scrapped as O’Malley felt the film would have a more “satisfying” ending if Scott ended up with the girl he’d been fighting for the whole time.

Additionally, O’Malley enjoyed so many aspects of the new material included in the film that some of it actually made its way into the graphic novel itself, including specific character lines written for the film.

It’s hard for fans to imagine anyone but Michael Cera playing the film’s titular character. Turns out, the same was true for the production team. Edgar Wright, the film’s director, has said that he’s a big fan of Cera’s ever since he saw him on Arrested Development and that as soon as he knew he’d be making this film, Cera was the only one he had in mind.

While the film is a near-perfect adaptation of O’Malley’s graphic novel as it is, some scenes feel like they’re ripped straight from the pages of the comic—specifically, the flashback scenes. Due to the visual similarity in artistic style to the graphic novel, many assumed these scenes to have been illustrated by O’Malley himself, but it was in fact the director’s brother*, Oscar Wright, who illustrated Ramona’s past, emulating O’Malley’s style in the process.

*correction to the original point, which stated that Oscar was Bryan O’Malley’s brother, not Edgar Wright’s.

Scott Pilgrim vs. the World is a genuine masterpiece, from its pitch-perfect casting (pun intended) to its endless Easter eggs for nerds like us to discover. The film truly is a love letter to nerd culture.

If we missed any Scott Pilgrim facts, feel free to let us know!