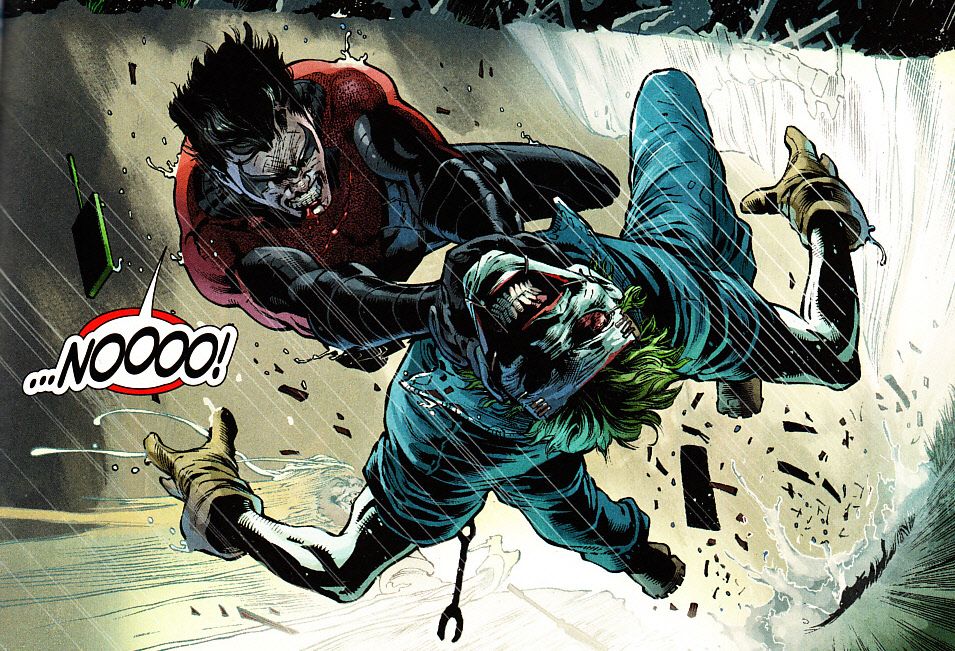 Dick Grayson‘s origin story is one that, to fans, is almost as well known as Batman‘s own tragic background. Dick and his family grew up in the circus as part of the “Flying Graysons” when Dick, the youngest of the family of acrobats, sees his parents killed by mafia boss Tony Zucco. He is taken in by Bruce Wayne/Batman and trained to be Robin (and eventually, Nightwing). However, in this week’s edition of Nightwing (#71), the hero gets a potentially new origin story, thanks to the Joker.

Dick, who is still suffering memory loss as a result of a bullet wound to the head at the hands of KGBeast and subsequently goes by the name “Ric,” (from Batman #55) encounters the Joker at Prodigal Bar, where he threatens to beat Dick’s girlfriend with a crowbar (reminiscent of Joker’s treatment of Robin in earlier comics). Joker claims he’s there to help “Ric” reclaim his memories. However, it’s not just an empty threat, as Joker produces Docter Haas’ memory crystals that contain Dick Grayson’s real memories/personality. This is where the Joker’s plan comes into full effect, as he begins to “rewrite” Dick’s origins by making himself the man who took the young child into his care after the death of Dick’s parents.

Joker begins to weave an entirely new tale: “Let me tell you about a little boy whose parents died in the circus. But their deaths didn’t make the little boy sad.” Joker said, “He was thrilled because a very nice man with green hair and white skin came to take that boy in…and raise him as his own.”

This panel shows a massive divergence from Dick’s true origins and leaves readers anxious for what may come next for the character. On the bright side, Dick’s “Ric” persona may finally be put to rest, but the fate of Dick Grayson as we know him truly hangs in the balance.

Issue #71 of the Nightwing comic series is available for purchase now.