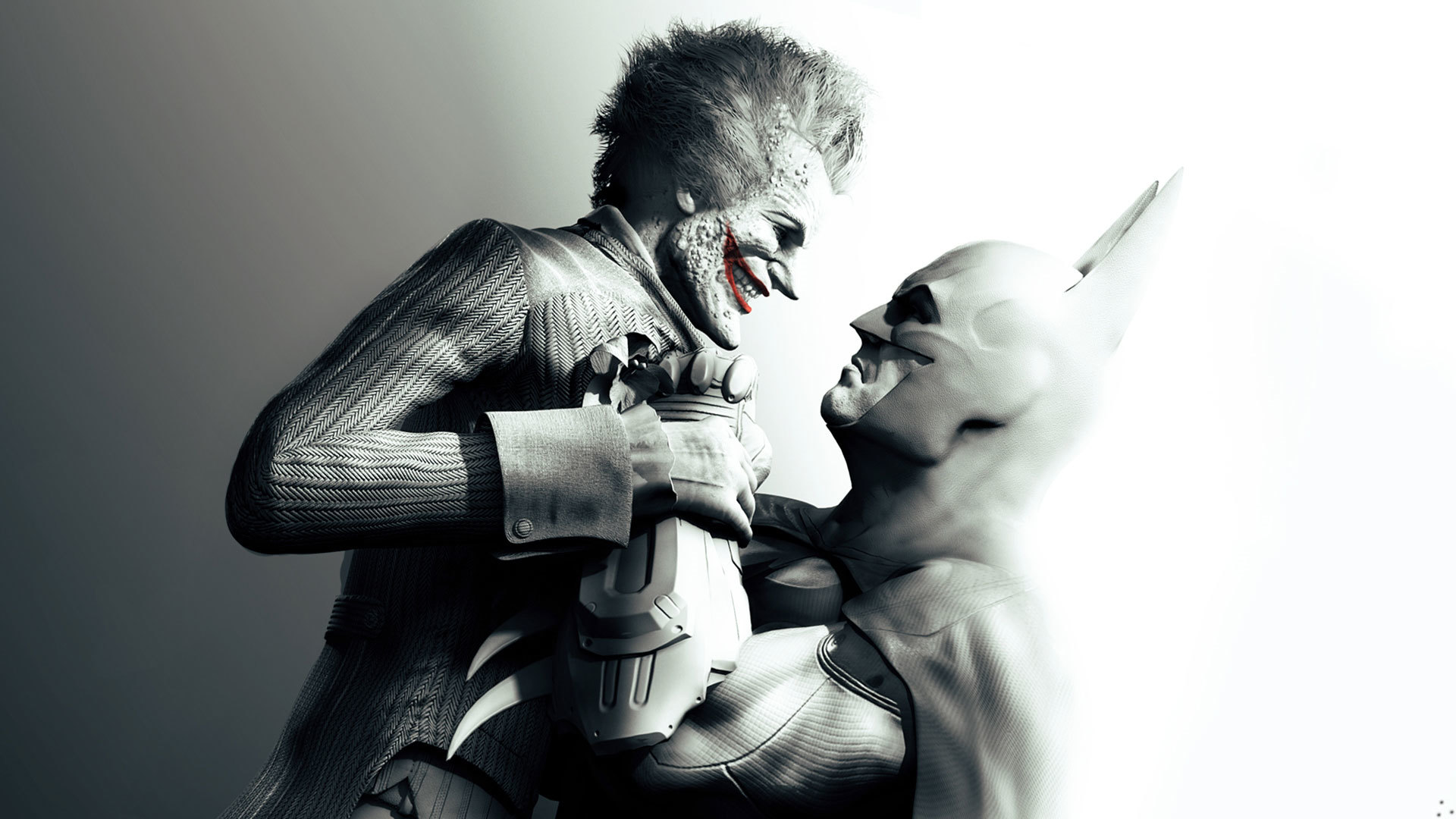 In this list, a guest writer and I count down our favorite moments from the Batman: Arkham games.

Throughout the story of Arkham Origins, Bruce spends a lot of time being a one man army, and Alfred doubts his mission as Batman. However, when Bane attacks the manor and Alfred nearly dies, Bruce has to revive him with Electrocutioner’s gloves, in a devastating moment that has parallels to the Wayne murders. Both of them grow from this moment; Alfred comes to realize why Batman is important, and Bruce learns he can’t be a man on an island. At first he’s ashamed that he couldn’t protect his home, but Bruce is convinced by Alfred to don the cowl once again as Joker starts a riot at Blackgate. Before Batman leaves, the butler reminds him being a hero isn’t just about brains or strength, but also allies.

This part of the game, after Batman saves Joker from falling to his death, is crucial for Joker’s relationships with Batman and Harley throughout the series. As Joker talks about meeting someone who completes him, Harley mistakenly believes he’s talking about her, when he’s actually talking about Batman. It’s very clever setup for their love triangle of sorts in the series. Combine that with the haunting visuals, being able to control the Joker, and The Killing Joke parallels and it all makes for an awesome part of the game.

What happened to Jason is not Bruce’s fault—not completely—but we get why he feels the way he does. Still, when Bruce reaches out and tries to make amends, Jason runs away, leaving us to wonder if the two will reconcile. When Scarecrow unmasks Bruce as the Batman at Arkham Asylum, however, Jason returns to help his former surrogate father, disarming a pistol Crane is about to empty into Bruce’s head and sniping Bruce’s restraints off of his wrists. It’s a fulfilling moment, as we see Jason embrace his inner anti-hero. The Red Hood insignia is painted on his chest, and Jason has been redeemed.

7. Joker reveals he was Black Mask

No one was expecting this twist, and there was a mixture of emotions from players about this reveal. Some fans didn’t like that Joker was being forced into another game as the central villain, but others, like me, saw it as an awesome character moment. It’s such a clever scheme for the Joker to make a name for himself in Gotham, and served as a great way to introduce Batman to his greatest foe for years to come—a dangerously unpredictable trickster.

Arkham Knight is all about Bruce facing his past and the consequences of his actions, and Barbara’s “death” only adds to Bruce’s guilt. We learn later in the game that Barbara’s death was a hallucination, but the shot hits like a truck in the moment. We feel Batman’s pain; in his eyes, Barbara died because of him. The death only complicates matters with Gordon, as Bruce later has to admit to the commissioner that his daughter is dead. The death just adds a heavy burden to Bruce’s already overwhelming night.

5. Right under his pointy nose

I mentioned earlier how Joker is the master of manipulation, and the Clayface twist from Arkham City only reinforces this concept. The Clown Prince of Crime uses Clayface to trick all of Arkham City into thinking he’s recovered, boosting the morale of his men and convincing rivals to steer clear. Even when he is dying, Joker manages to have complete control of the situation. Batman doesn’t realize until the end of the game that Clayface has been impersonating the Joker, and by then, it’s too late. Talia thinks she’s killed Joker, but she’s merely stabbed Clayface, and as soon as Batman realizes this, the real Joker kills her.

The final story encounter for Arkham Knight sees Batman struggle against his inner demons, in a section of the game that seems like it’s ripped straight from the comics. Manifested in Bruce’s mind, we see Joker’s fear of being forgotten and get to play as him on a violent rampage against several of Gotham’s rogues as the Clown Prince of Crime tries to take over Bruce’s mind and body. In an epic finale, Batman emerges from an Arkham Asylum holding cell and tells Joker he will be forgotten. The Dark Knight delivers the iconic line, “I am vengeance. I am the night. I am Batman,” as he locks the memory of Joker away forever, finally freeing himself from the one thing he feared—succumbing to the Joker.

Throughout the Arkham City story, Batman is investigating what Protocol 10 could be, and when the moment finally comes, it’s truly an insane one. After Selina frees him from the rubble in the steel mill, Batman hears the raining of missiles. As he walks out into the city, the Arkham City theme blasts in all its glory, as we see helicopters as far as the eye can see, wreaking havoc on the prisoners below. It’s a haunting part of the game, as Bruce is forced to make the choice between saving Talia from Joker or stopping Hugo Strange, while the city burns below him.

The true 100% ending for Arkham Knight is left open to interpretation. One implication is that Bruce has faked his death, and has come back once more as the Batman, this time with a modified suit injected with his own strain of fear toxin. Assuming this is indeed Bruce, it’s just the right upgrade. After Scarecrow’s ultimatum has put Batman’s identity out in the public, the next logical step would be to once again become a myth—a creature of the night and a personification of fear itself.

The reason this isn’t part of the top 10 is because everyone saw this reveal coming from a mile away. Even before the game released, theories were flying that Jason was the Arkham Knight, and the common theory proved to be true. The game also hints at Jason being the villain throughout brutal flashbacks to Joker beating the Boy Wonder. Still, when Jason takes off the helmet and shows Bruce who he is, it’s a devastating moment that adds to Arkham Knight‘s theme of facing consequences. Bruce wants to make things right, but Jason pushes him away. Even if it is predictable, the reveal and Jason leaving after the boss fight delivers a hefty emotional gut punch.

The first 10 minutes of Arkham Asylum are more than enough for Batman fans to get invested. Batman knows Joker allowed himself to be captured, and he wants to know the Clown Prince’s endgame. From the very beginning of the game to the point where Joker frees himself, we already see Batman and Joker perfectly personified. Batman’s detective mind is already trying deduce what’s going to happen before things even go bad, and the Joker taunts everyone, with ever the conniving mastermind with gleeful confidence.

You probably saw this one coming, but of course this has to be the best moment in the series. Joker dies because he caused Batman to drop the cure, which Bruce would have still given him regardless. “You want to know something funny?” Batman asks him. “After everything you’ve done, I would’ve saved you.” Joker laughs. “That actually is . . . pretty funny.” Then he dies, with a final smile on his face. Seeing Batman carry the Joker’s body out of the theater wordlessly, a parallel to the Cain and Abel painting from the beginning of the game, and with nothing but somber music playing, was one of the most powerful endings to a game ever. Mark Hamill’s cover of “Only You” in the credits only adds to the tragedy, making Joker’s death the most powerful moment in the Batman: Arkham series.

And that’s our list! Any moments we missed? Let us know your favorite scenes from the Arkham series!