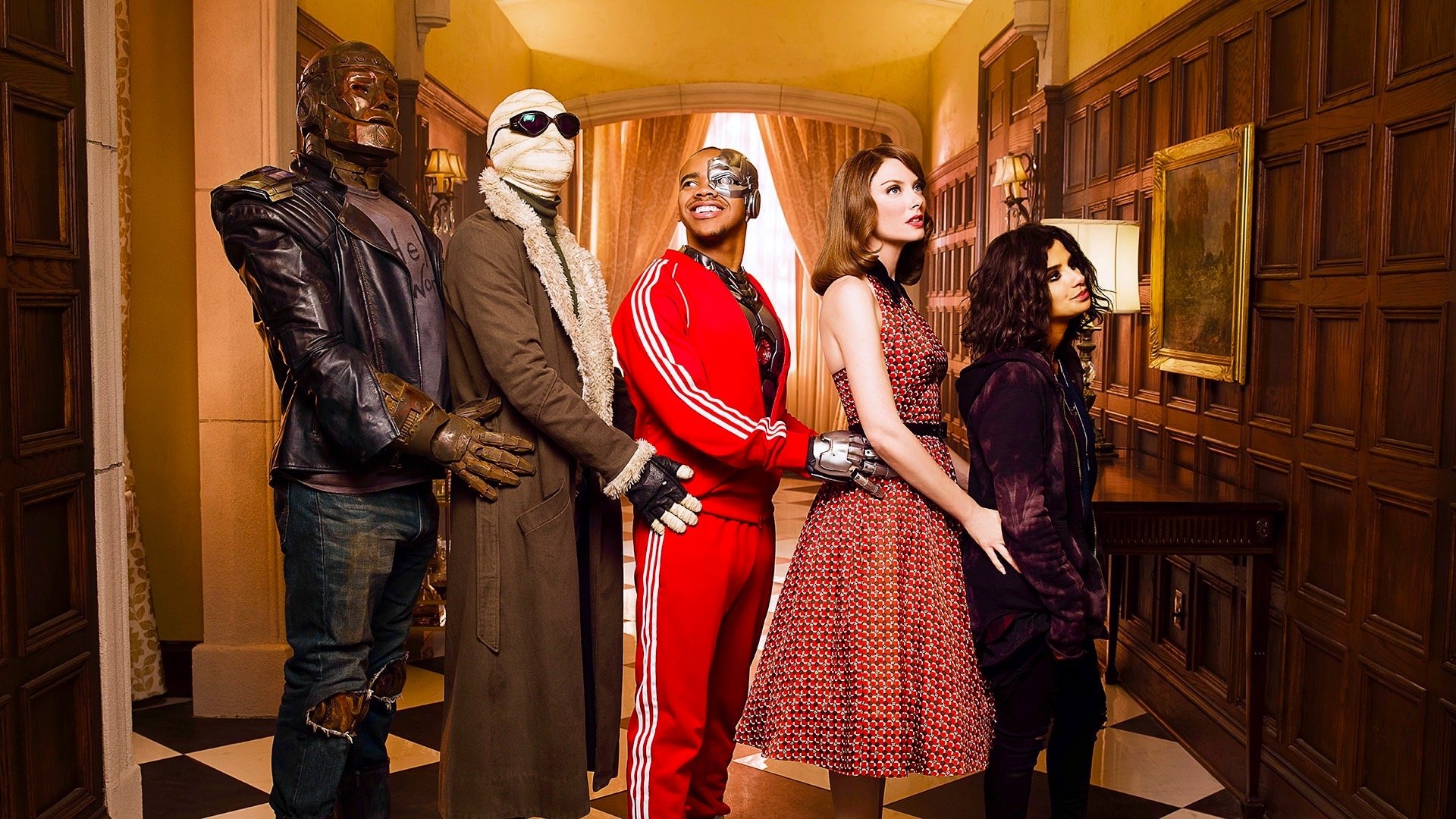 A personal retrospective on “Doom Patrol,” a unique show in the superhero genre and one of my favorite series of all time.

One year from today, the first episode of Doom Patrol debuted. Hot on the heels of its predecessor Titans season 1, it was the DC Universe streaming service’s second original show. Titans was a bit of a weak start to kick off the roster of exclusive content, and I was one of many viewers unimpressed by it for its mediocre, basic writing and overall forgettability. I wasn’t really expecting much from Doom Patrol then, and expected this show, too, to be subpar with a couple of occasional glimpses of what could have been. Little did I know then, it would become one of my favorite shows.

I instantly fell in love when I watched the pilot, and that feeling grew more and more as the season progressed. Doom Patrol felt so different from other properties in the superhero genre, simply because its main conflicts aren’t rooted in sci-fi or magic. No, the story revolves around characters with real, human problems. Struggles that any of us can deal with. Doom Patrol doesn’t feel like the traditional superhero fanfare because it’s not about the idea of being heroic; it’s about being human, and overcoming ourselves.

From the very first episode, we get a sense of who the main characters were before their accidents—namely, Brendan Fraser’s Cliff Steele, Matt Bomer’s Larry Trainor, and April Bowlby’s Rita Farr. We learn about how about how Cliff was a cheater, and how he deals with the guilt of never saving his marriage and losing his family.  We discover that Larry was a hotshot American pilot with the perfect family, but that he’s secretly been hiding a relationship with another man, which was taboo in his time period. We find out that Rita Farr was a famous Hollywood actress who had a good career on her belt, but was always full of herself, until she lost everything, including all her confidence.

We are later introduced to Jane (played by Diane Guerrero), a woman with split personality disorder as a result of sexual abuse, and Cyborg (portrayed by Jovian Wade), who struggles with his controlling father’s imposing will.  These characters seem far from the typical hero—they are all severely flawed in one way or another, and stripping away the powers that make them “super” doesn’t change those flaws. Failed relationships, suppressed sexuality, pride and vanity, emotional trauma, the desire for independence―these are all real struggles for actual people. When we think of the typical superhero, we think of their “super side” before we think of their “human side.” Doom Patrol flips this around. The focus isn’t on the “super,” the focus is on the “human.”

What Doom Patrol manages to achieve is that it balances the fantastical elements from the comics with the grounded, human struggles of the characters, not simply choosing to focus on one more than the other. The best example of this, and my personal favorite episode of the show so far, is 1×09 “Jane Patrol.” The episode focuses on Jane, who remains more of a mystery than the other four “heroes” up to this point, as we explore the Underground, the mental manifestation of her 64 personas. From the conductor Driver 8 to the grotesque Sisters, the show captures so many personalities that Jane has in the comics to a T. However, we learn as the episode progresses that these personalities, quirky and colorful as they are, originate from a place of outright darkness.

They were created, one by one, as protectors for baby Kay, as she endured more and more trauma. Jane doesn’t know this, as her memories have been suppressed, and we follow her to the Well, where she finally uncovers the truth. When Cliff stops her from falling into the Well, Jane is confronted by Daddy, a memory of the sexual abuse she suffered. Jane is paralyzed in fear, but when Daddy is about to kill Cliff, something snaps. Jane screams at him. He’s taken so much from her, but she won’t let Daddy take Cliff too. Despite the fear in the moment, she won’t lose the first person who has genuinely cared about her.

I actually teared up watching this raw, powerful scene (and am even tearing up a bit now), thinking about how Jane, a fictional character, took her first step in confronting her biggest fear, the man who abused her. The end of the episode is reflective of the coping process, as Jane still hears Daddy’s voice echo in her mind. You just don’t get over something like that in an instant; her moment of strength is just the first step, and that’s how recovering from trauma is in real life. This is what makes Doom Patrol so good. The characters feel real. The pain and emotion feel real.

I also feel like 1×08 “Danny Patrol” did a good job of capturing humanity in another character, Larry. Danny, a literal living street, is adapted to the screen in this episode, surprisingly accurate to his original 1990 debut in Grant Morrison’s Doom Patrol comic run. Danny is a safe haven of sorts, for all the people who feel outcast, and of course, the character plays a crucial role in Larry beginning to accept who he is, as a gay man. As the season progressed before this episode, we got a full grasp on Larry’s self-loathing, but he never really confronted it until this point.

In the “People Like Us” karaoke scene in “Danny Patrol,” Larry begins to realize his sexuality might be different, but that it isn’t something to be ashamed of. The song is all about embracing yourself and being proud of it, and Larry genuinely seems happy as he sings along. The bandages come off, and we see a man smiling widely to a dancing crowd, as he has finally found a place he fits in. Then, of course, the scene cuts, and we realize this was all in Larry’s head, as he refuses the karaoke mic. He wants this so badly―to be comfortable with himself―but where and when he comes from holds him back.

I found the scene so impactful because we all have done this at some point. Everyone has vividly daydreamed of something, but never went through with it out of fear, and the way the show visualized this concept was really beautiful and believable to me. It illustrated the internal conflict of Larry’s character by showing, not telling. The icing on top of the cake is that by the episode’s end, Larry has decided he doesn’t want to keep living in fear. He stands up to Darron Jones to protect Danny the Street, fighting for the place that made him realize that maybe he can accept who he is.

All of the character’s conflicts were grounded, but they were presented in a way that captured my attention, as a comic book fan. The idea of Cliff needing to reclaim his humanity after being turned into a machine, Rita losing her conceited mindset after being deformed in an accident, or Cyborg dealing with changes to himself that he refuses to get help for―they’re all poetic representations of real issues, while also being entertaining. I didn’t really think of it that way when I first watched the show, but as I rewatched my favorite episodes, I saw that, just like the Grant Morrison comics, Doom Patrol was all about commentary on a variety of issues, made accessible to the fans of a “nerdy” medium.

Doom Patrol is probably one of my favorite shows because it handles complex emotions in a way that people don’t expect from the superhero genre. I know DC films like Man of Steel and Joker have gone above and beyond to explore the human layer of comic book characters, but Doom Patrol is one of the few shows in the genre to tackle this approach, from a variety of different characters, and in a dark, mature way. I sincerely hope more superhero shows take notes from Doom Patrol, because I find this way of portraying characters much more engaging and overall impactful than the CW or MCU content. Doom Patrol has a lot to say and explores its characters on a meaningful level, and I hope season 2 continues the trend.