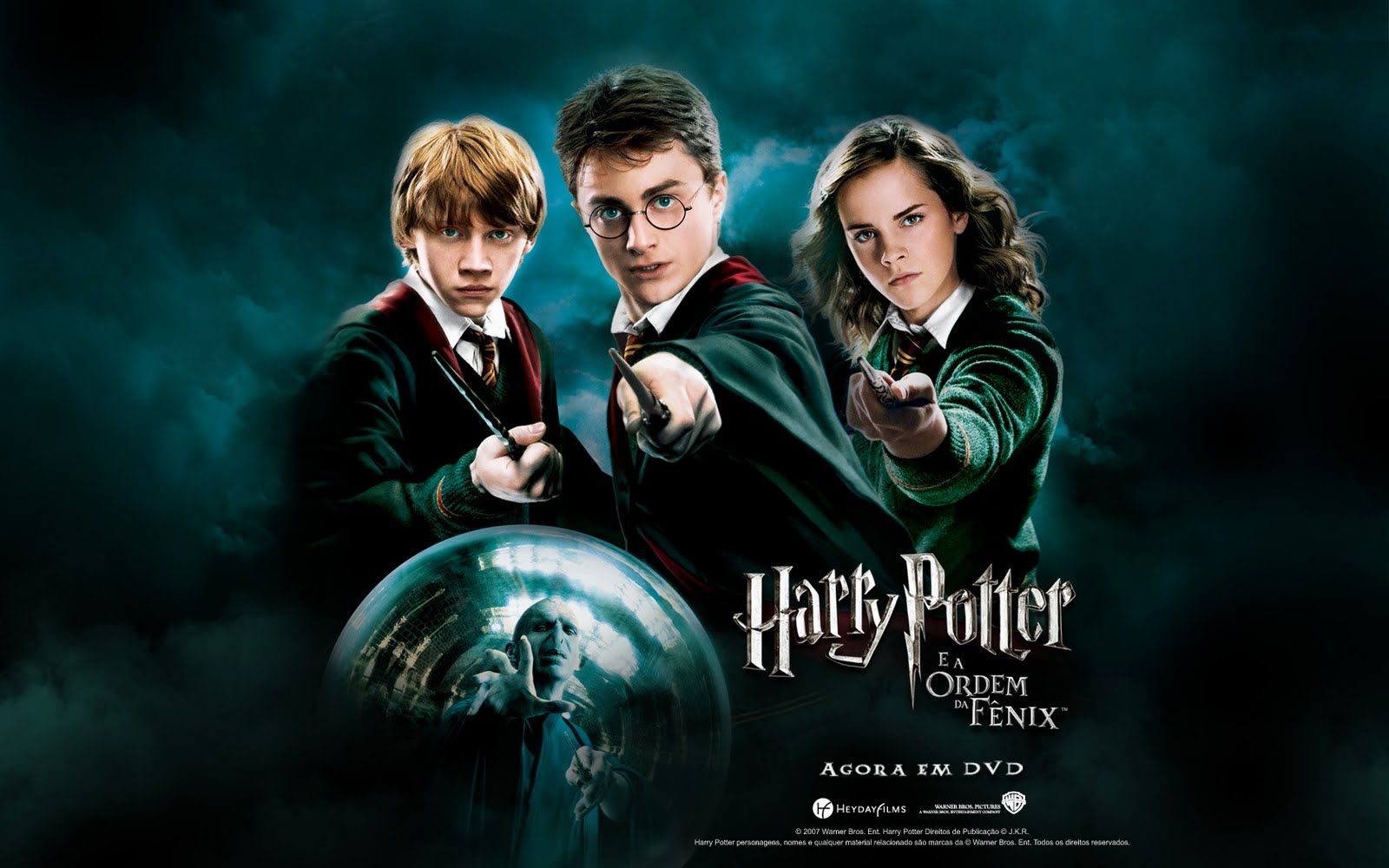 “TCN’s From Page to Screen” continues, as we compare “Harry Potter and the Order of the Phoenix” to its film adaptation.

Order of the Phoenix deals with the immediate aftermath of Voldemort’s return during the Triwizard Tournament. The Ministry of Magic is out to silence Harry’s claims of the Dark Lord’s return in order to prevent mass panic in the Wizarding World, which makes them just as dangerous as Voldemort when it comes to threats against the Boy Who Lived. The Ministry was always seen as an ally, but Order of the Phoenix changed that dynamic, truly stacking the world against Harry as the series climbed towards higher stakes. However, while the novel played a pivotal role in Harry’s growth as a protagonist, Voldemort’s threat as a series antagonist, and the series’ overall tonal shift into a more mature story, the film leaves a lot to be desired. While Order of the Phoenix film does some things right, its main issue is excluding some much needed character depth and narrative gravitas.

When it comes to the characters in Order of the Phoenix, we have to talk about Professor Dolores Umbridge, played by Imelda Staunton. It’s a common joke in the Harry Potter fandom to say this lady is a greater villain than Voldemort himself, which is just a testament to how nasty she truly is. Staunton perfectly captures Umbridge and makes audiences hate her, the way Rowling had intended for Umbridge to be seen; she truly brings a meaning to the title of “witch.” I was thoroughly annoyed by her mannerisms and progressively grew more and more fed up with her actions against Harry and Hogwarts as a whole, which means the movie did a great job portraying her. The “I must not tell lies” bit was particularly well executed and solidified Staunton’s excellent portrayal of Umbridge.

Cornelius Fudge, the Minister of Magic, is another character who plays a big role in Order. Played by Robert Hardy in the series, Fudge has appeared previously in Prisoner of Azkaban and Goblet of Fire, but he is most prominent in the series’ 5th installment. While the films tend not to focus on him as much as the books, I think Fudge was well-casted as a politician who clearly doesn’t know what he is doing but does a good job of pretending. Hardy’s performance in Order really does capture Fudge’s duplicitous character, and while he was like-able in the first couple films he was in, he managed to pivot into the slimy, dishonest politician role fairly well.

The title Order of the Phoenix is, of course, referencing the alliance of wizards that Dumbledore assembled to stand against Voldemort, and as such, the books introduced a few new characters who were members of the trusted group. Characters Nymphadora Tonks, Mudungus Fletcher, and Kingsley Shacklebolt made their debuts, portrayed by Natalia Dena, Andy Lendin, and George Harris, respectfully. I know they’re all minor characters in both this part of the series and the series as whole, but I have to say, I liked all of them. Tonks especially is a well-adapted character, and made we wish small characters like her got a bit more screen time. Harry Potter’s universe is full of diverse characters, all with interesting stories to them, but the film medium prevents these side stories from being told.

On that note, I should mention the missing plot arc with Percy and the rest of the Weasley family, which could have easily been adapted as a side conflict in the film. In the book, Percy feuds with the other Weasleys, choosing to blindly follow the Minister’s insistence that there is nothing wrong and ignoring Harry’s plight that Voldemort has returned. Not only does it offer some more for the Weasley family narratively, but this plot arc also addresses how people in real life will blindly obey the government—a lesson I think fits the overall theme of the film and remains relevant today. Percy literally appears in a couple of scenes, so it baffles me that this side plot wasn’t included in the film, even as a brief scene or two. This could be because of the previous films’ inattention to Percy’s character, while the books gave him a bit more of a presence—something that can be said about a lot of fan favorite side characters, especially in the series’ later installments.

One of the worst mistakes made by the Order of the Phoenix movie was the poorly portrayed bond between Sirius and Harry. This could have easily been mentioned in the Goblet of Fire analysis, as this flaw applies to both adaptations in the series. While the chemistry is there between Gary Oldman and Daniel Radcliffe, the writing doesn’t really offer enough to show how Harry has grown to see Sirius as a father figure. The books offer several small moments that fully capture the essence of Harry and Sirius’s relationship, which makes Sirius’s death in the book so much more impactful than in the film. In the movie, we don’t see Harry and his godfather interact nearly as much, which really hurts the investment we as the audience are supposed to have in their bond. Sirius’s death in the film still raises the stakes, demonstrating the seriousness of Voldemort’s return, but it just doesn’t carry the same emotional weight as the novel.

Dumbledore’s battle with Voldemort remains perhaps one of the best moments in the series as a whole, and definitely the greatest moment in this film specifically. Previous installments had always put an emphasis on Dumbledore’s power, but it was not until his duel with Voldemort that the full extent of his abilities was shown to fans. Translated wonderfully to the screen, Michael Gambon’s characterization of the renowned wizard fully captures Dumbledore’s true power and just how much of a threat he poses to Voldemort. In the novel, the duel is meant to be show readers what two powerful wizards in combat truly looks like, and this is exactly what we get in the movie, arguably to a better effect. The film medium allows fans to see Dumbeldore’s power unleashed in such a way much more awe-inspiring than what was accomplished in the novel, truly enhancing audience understanding of how Dumbledore is the tipping point for the Wizarding World.

As for Dumbledore’s Army, I was fairly satisfied seeing how the group was handled in the film. Exploring the group of students in this film was probably one of the best adapted elements in Order. I think it was very important to establish the DA so that Neville, Luna, and Ginny helping Harry in the film’s final battle feels earned, and I think this is where the film excels. The sense of camaraderie between Harry and his fellow Hogwarts students is better explored than ever before in the series in Order of the Phoenix, which is important for the rest of the series. Knowing that Harry is not alone in his two-fold battle with Voldemort and the Ministry of Magic highlights one of the series’ most important themes—friendship. Dumbledore’s Army embodies this important aspect of the Harry Potter story, and thankfully it was handled so excellently, from the lessons in the Room of Requirement (also well-adapted) to the student body’s almost unanimous contempt for Professor Umbridge.

One final aspect of the film that needs to be addressed is the tone in general. A very important aspect of Order of the Phoenix is that it indicates a shift into a darker part of the series—the stakes are higher and the threats Harry is facing are much more serious. However, it simply feels like the Order of the Phoenix film doesn’t want to take this risk. The film glosses over a lot of the dark elements of novel, from Harry’s struggle to battle off Voldemort’s mental attacks on him to the severity and aftermath of Sirius’s death. I even noticed that a lot of Umbridge’s egregious actions as the headmaster of Hogwarts are played more for laughs than to actually show how twisted she is as a person. The direction of the film is aimed more towards a comical film at times that in some ways does not line up with the tonal shift in the novels.

Overall, Order of the Phoenix feels like a very surface level adaptation of the novel. As the longest book in the series, it makes sense that so many elements would be missing from the film. While this is perfectly reasonable, it simply results in a film that does not necessarily feel fleshed out enough. The characters pop and the overall narrative of the Harry Potter saga progresses, but the character beats—from Harry’s relationship with Sirius to the complete omission of the Weasley family drama with Percy—results in a film that, while well produced, leaves a lot to be desired for readers of the books. Order of the Phoenix is certainly one of the most prominent examples in the series of how much gets lost in a page to screen adaptation—a trend that will continue in Half-Blood Prince, the next film this article series will tackle.