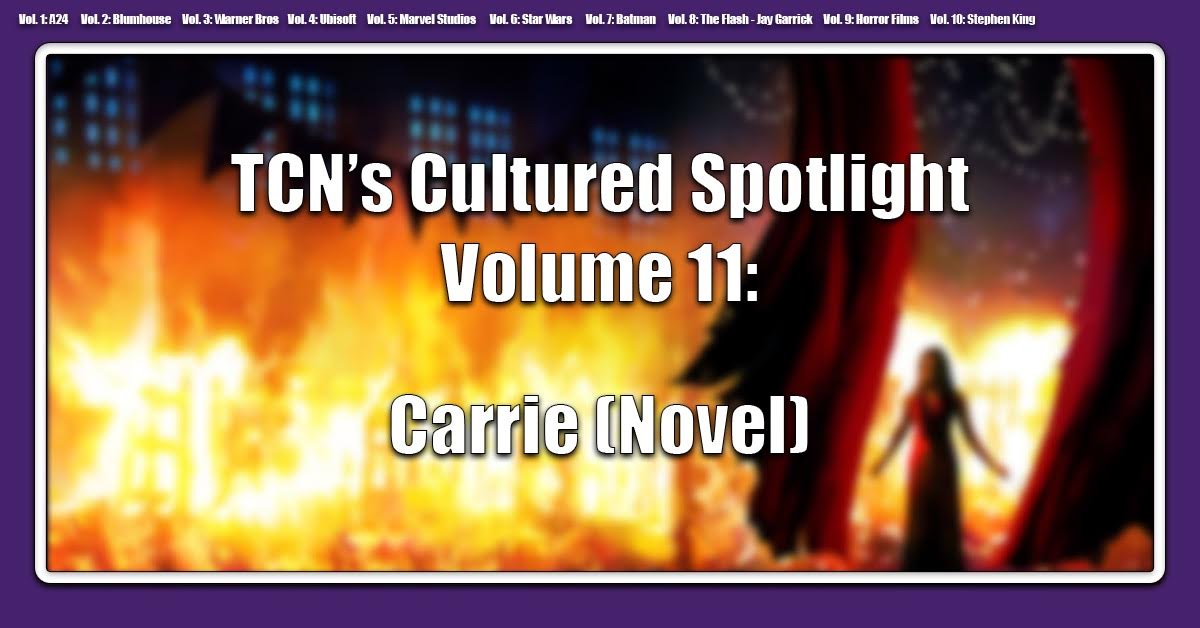 Welcome to Volume 11 of TCN’s Cultured Spotlight. In this edition we will be discussing the classic Stephen King novel, “Carrie.” Warning: Major Spoilers Ahead.

Welcome to Volume 11 of TCN’s Cultured Spotlight. In this Spotlight we will be discussing the classic novel from Stephen King, Carrie. Warning: Major Spoilers Ahead.

Released in 1974, Carrie was the first of dozens upon dozens of novels from The Master of Horror, Stephen King. In this novel, King tells the horrific story of seventeen year old Carrie White and the infamous event simply known as Prom Night. Carrie was constantly bullied throughout her childhood by the kids she had gone to school with; you could even argue her mom, Margaret White, was a bully as well. We will dive more in detail with later on, just know this story is told from numerous perspectives and I will do my best to cover most of them. Also, this your last warning, there are MAJOR SPOILERS ahead, so tread lightly.

The plot for Carrie is a very interesting one. There are numerous characters that are just as pivotal to the story as Carrie White herself, whether is be Christine Hargensen or even Miss Desjardin. Miss Desjardin’s role is important because she is there to support Carrie and make things right after how she poorly handled the locker room incident; this almost comebacks to hurt her in the end, but luckily she’s is one of the few to survive this story.

The story starts off innocent enough, the high school girls are in the locker room showers after gym class. Carrie is obviously the odd one out because of her appearance, and because she could never learn to fit in. What comes next will eventually lead to the death of 440 people and the destruction of an entire town. Well, Carrie ends up getting her very first period, at the age of seventeen, and she has absolutely no idea of what is happening; her mother never taught her these things growing up because she believed it to be a sin.

Carrie begins to completely freak out, she thinks she is bleeding to death. If you couldn’t have guessed it yet, the girls in the locker room don’t handle this very well. The girls, including Sue Snell and Christine Hargensen, begin taunting and yelling “plug it up, plug it up, plug it up.” Miss Desjardin eventually slaps Carrie, not in a rude way but only to help Carrie gather herself. Soon after this Miss Desjardin and Assistant Principal Morton attempt to get names from Carrie to help identify and punish the ones behind this. This leads to Christine Hargensen loosing prom privileges and the plotting of getting back at Carrie.

Long story short, Hargensen’s boyfriend and a few of his friends get their hands on pig blood with the intention of dumping it on Carrie at the prom. Sue Snell isn’t involved in this act as she is trying to make things right with Carrie. Snell convinces her boyfriend, Tommy Ross, to take Carrie to the prom. Prom is going great, Carrie is finally happy and fitting in among her peers, and then she and Tommy are voted Prom King and Queen. After being voted King and Queen, Carrie and Tommy are on the stage as two buckets of pigs blood are dumped on them by Christine and Billy. One of the buckets falls and knock Tommy unconscious, he will die later on in the explosion that destroys the school.

Moments after this, Carrie go berserk and goes on to destroy the town of Chamberlain, Maine and kill 440 people including her own mother. Sue Snell, Miss Desjardin, and Mr. Morton are among the few to survive. Carrie eventually succumbs to the exhaustion and dies from a brain hemorrhage and blood loss. The interesting part, and what I think brings the story full circle, is that the story ends with Sue Snell getting her period after watching Carrie pass away. There is also a cliffhanger to end the novel. King ends the novel with a huge cliffhanger by adding in a letter from a woman named Melia. In the letter, Melia describes her daughter by talking about how pretty and beautiful she is. The kicker is that her daughter is seemingly telekinetic (like Carrie), as she describes her moving around marbles in the air without even touching them. She also reminisces on how it reminded her of her gramma and how she would move her rocker without touching it.

The way the story is crafted is very well done. Even though there are a lot characters, each one that is involved is well developed and their motives are made clear. Another interesting part of how the story is told is that King uses different news articles and books to foreshadow certain events. Some of the articles and stories come straight from Sue Snell. These bits of information are talked about way after the events of Prom Night. The most common of these come from The Shadow Explained, which generally discusses and informs the reader about telekinetic abilities and how they pertain to Carrie White. My Name is Susan Snell is where Sue talks about her experiences with what had happened before and after Prom Night.

The story is split up mostly between Carrie, Sue/Tommy and Christine/Billy. I believed this helps build suspense because we know what is going to happen to Carrie way before anything happens. The parts with Christine and Billy were interesting because you get a good chance to see Billy’s character develop. He starts off as just a boy who listens to Christine’s every word, but then we get to see him become the man in charge of taking down Carrie. It’s great character development.

Each section of the novel served it’s own purpose; some were there to inform, some were there to scare you, and some were even there to make you feel good. The novel’s pacing was good because it start’s off really slow but in a good way. The beginning, much like anything, is there to inform you of who these characters are and to provide backstory. What’s crazy is that some of the intriguing backstory come later on closer to the middle and end of the story. Once we reach the point where Sue Snell recommends that Tommy take Carrie to the prom, then the novel becomes an absolute page-turner.

What I liked a lot about Carrie, was that nothing is really confirmed about The Stones. I think it’s great that as you’re reading, there is still this mystery about The Stones that never solved. I think that’s something that will allow the reader to come with their own theory. Another thing I really liked was how well the story is paced.

How everything starts to come together is really cool and special. My favorite part is how Sue comes to feel sorry for Carrie and really wants to help her, especially at the end. Seeing her character develop from this bully to someone to genuinely wants to help was fun to read. I think there’s a valuable lesson in Sue’s story and I think that lesson is simple and easy, be kind to everyone because you never know what someone is going through. I was hoping that Carrie’s mother would’ve come around at the end and learn that not everything is a sin, but once Margaret starts sharpening that knife I realized that wasn’t going to happen.

Going back to what I was saying about foreshadowing, this helped build up to a crazy ending. The excerpts from books and interviews helped build this mystery of what happened on prom night. Once Carrie snaps, you quickly realize exactly what those excerpts were referring to when they talk about all the deaths and mass destruction of the entire town. Before the novel ends, King gives you really good look at how the town is attempting to rebuild after what happened months prior.

Carrie was a thrill to read and is obviously one of Stephen Kings best works. If you haven’t read it yet and weren’t turned away from all the spoilers in this Spotlight, I highly recommend checking it out because this Spotlight doesn’t do it justice.

Have you read Carrie? If so, what were your thoughts on the novel?