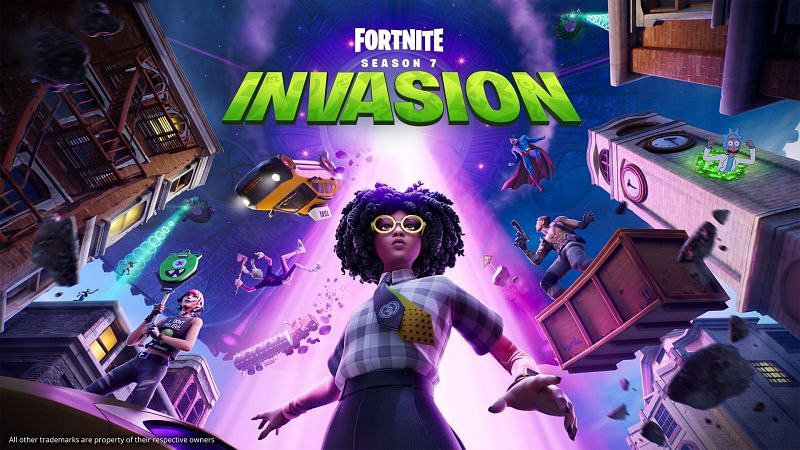 All aboard the Battle bus!

Epic Games has officially released Fortnite’s Chapter 2; Season 7 story trailer and it looks like the game has incorporated a whole new theme and an out-of-the-world experience for players. Epic Games spared no change in giving players this XCOM style scenario for season 7!

Right off the bat, the trailer shows that the aliens have arrived and they’ve blown up the spire and have declared war on the inhabitants of the Fortnite island. Heroes and scientists from different universes assemble to meet this danger head-on and send them back to space! The motive of the aliens still remains to be seen but the players can now give them reasons to leave.

The trailers features the likes of Morty and the Butter Bot from Rick and Morty, Superman, the destruction of the spire which leads to The Foundation being freed from its prison and a malevolent alien species that invade the island for unknown reasons.

The trailer hints at a man in a suit wearing glasses reacting to the invasion and we can only guess that it is none other than Superman disguised as Clark Kent. The man of steel is on the island and he’s here to bring the fight to the aliens! He will be available as a part of the Battle Pass and the whole Superman set will be available to download after 65 days!

Fortnite Chapter 2 Season 7 is getting a full fledged collaboration with the Rick and Morty series and Grandpa Rick has made his way into the battle pass to fight alongside Superman against the alien invaders!

The alien invaders appear to arrive on their mothership and hover over the island. They bring with them advanced technologies and weapons, which will undoubtedly be added to the current season’s loot pool over time. Judging by the trailer, aliens will be hostile in-game and engage players. In addition to the aliens, players will also be able to use their own spaceships in-game as well. They can be used to pick up objects with a gravitational beam and fling them around.

Epic Games also released the Battle pass trailer for this season and while they didn’t feature any new skins from Fortnites’ universe, it did tell us that they’re bringing back the battle stars system which aids in claiming all the rewards from the season. Players can collect the stars and exchange them to get the battle pass rewards you want in the order you want them! Players who don’t choose to purchase the Battle pass can claim free pass awards on each page using battle stars. There’s something in this season for everyone!