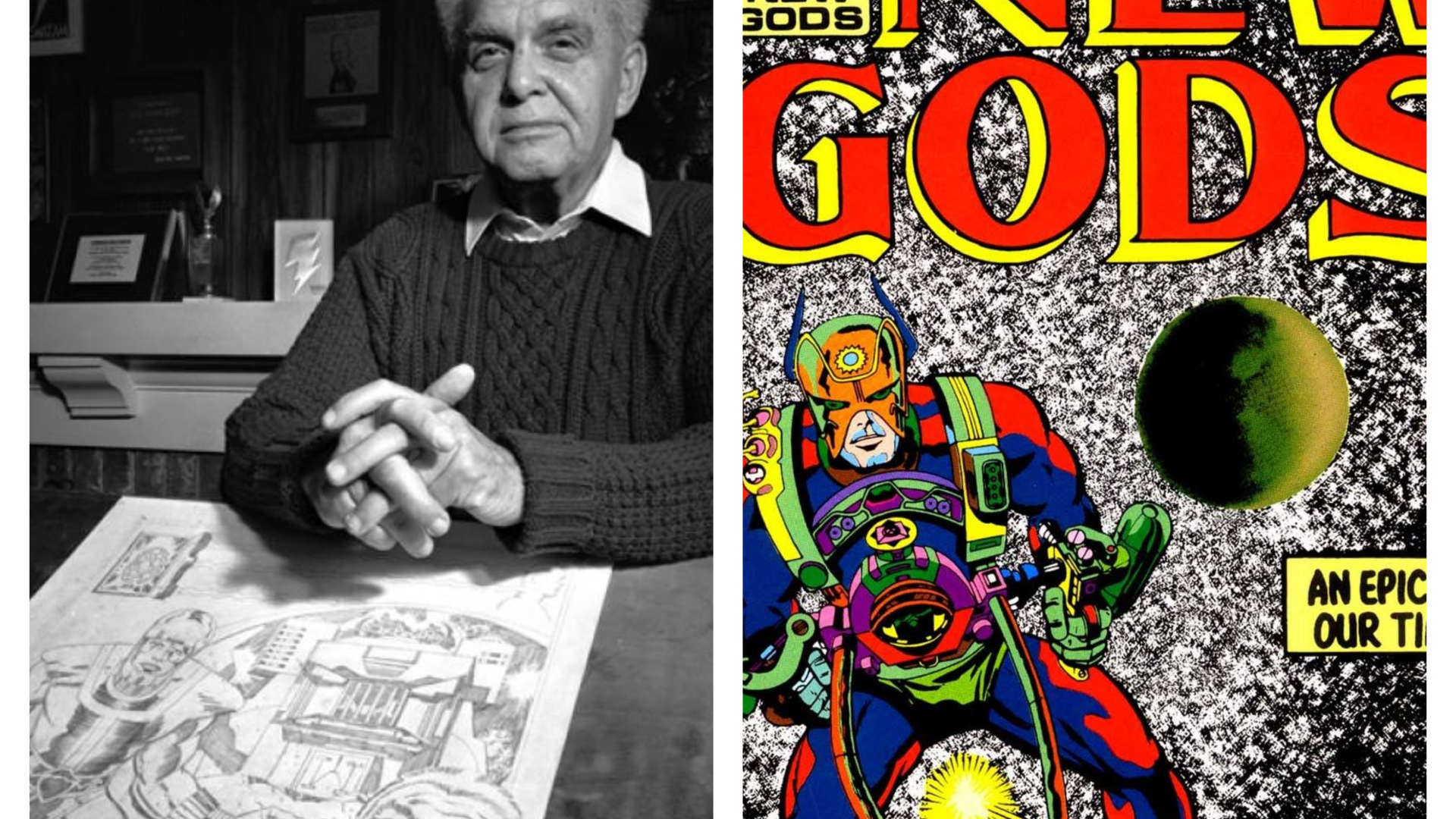 Honoring Jack Kirby and 50 years of the New Gods

Throughout the history of the comic book industry there have been an overwhelming amount of characters that have risen and fallen in comics—beings of unbelievable power that become entirely different people and have even been swapped out in favor of new, fresh faces.

Alongside these new-age titans of the 20th and 21st century are the people who brought them into the world—individuals that have left a mark on history for their achievements as writers, artists, colorists, inkers, letterers, editors and publishers. Yet no one has come close to the impact that Jack Kirby left upon comics.

Heralded as the ‘King’ of comic books, Jack spun new worlds into being with imagination and art. From the depths of his mind and collaborations with the likes of Joe Simon, Stan Lee and other talent came heroes and teams whose names echo down through the ages—Captain America, Iron Man, the X-Men, Thor and the Avengers just to name a few.

Yet so many outside the fandoms are quick to forget that Jack did not just play in the sandbox that is Marvel Comics. He also dared to walk the line and bat for the other side as well. In 1970 Jack Kirby left Marvel to work at rival company DC Comics. From 1971 to 1975 characters who still hold prominence in the halls of DC history were created by this one-man wonder: OMAC, Kamandi the Last Boy, Etrigan the Demon and the villainous Kobra.

But the most prominent of his creations during his time at DC is a group of individuals whose names and likenesses are still beloved by fans of his work to this day, beings of unbelievable cosmic power who have remained firm foundation stones in the mythology of DC Comics and will no doubt continue to be so for generations to come. I am speaking of course of the New Gods.

50 years ago Jack crafted a world not unlike that of mighty Asgard and Thor, a place of epic stories, great battles, love, loss, the sorts of tales that would not be out of place in the mythologies of the past.

On one side of the table, there are the Gods of New Genesis. Highfather, Orion, Lightray, Mister Miracle, Big Barda, Infinity Man and countless others all possessed great powers and abilities, dedicated to the preservation of life.

At the opposite end of the spectrum, the Gods of Apokolips. Granny Goodness, DeSaad, Glorious Godfrey, Kalibak, Mantis were creatures with warped minds and bodies who served a being of great evil and exist only to spread his vile message of control and subjugation throughout the cosmos.

He is one of the most absolute vile villains ever created throughout DC Comics. The absolute antithesis of all darkness throughout the DC Multiverse. He is Darkseid.

Jack took inspiration for Darkseid’s look from actor Jack Palance, while the personality of the Master of Apokolips was a fusion of Adolf Hitler and Richard Nixon.

As time has passed Darkseid’s look has remained more or less unchanged. However a variety of artists and creative personalities have tweaked the form of the fiend to give him an even more imposing stature. Zack Snyder’s Justice League gives the villain more of an armored appearance, while still retaining the classic headpiece and ever sullen visage.

Over the years as it is with comics, other writers and artists have plied their craft and brought Jack’s creations into the wider scope of DC Comics. The following is a selection of series (in order of publication) involving the New Gods:

The Legion of Superheroes: The Great Darkness Saga (1982); story by Paul Levitz and Keith Giffen, art by Keith Giffen

Superman: The Dark Side (1998); story by John Francis Moore, art by Kieron Dwyer

To honor Jack and this milestone anniversary of his creation, this reporter reached out to various persons in the pop culture industry. The purpose, to have them share their thoughts about Jack Kirby and the New Gods.

Jeremy Kirby (grandson to Jack Kirby): The New Gods evoke our greatest hopes and darkest fears. A grand space opera that spans thousands of years and countless galaxies, yet at its core, is a struggle between father and son, light and darkness. My grandfather never lived to see the immense popularity that these characters have gained over time. Their importance to the DC Universe is a testament not only to my grandfather’s vision, but the amazing creative talent who have come since. The New Gods mythology was designed to be our new legend, passed down from generation to generation. I see the excitement in my children’s eyes when they see a fourth world character in a book, a show, or a movie and I realize that vision is upon us.

Cecil Castelucci (writer, Female Furies limited series): One thing you become quickly aware of in reading Kirby’s Fourth World is that he is a master world builder. Kirby left so many threads to pull on for where he was going with other great characters that he introduced but didn’t focus on. You can see the possibilities of other books being spun out from those characters and story teases. He had an endless brilliant well of ideas that he was experimenting with that touched on the human condition, science and the existential questions we all have about good and evil. For me, in reading it all, there were so many questions I had about the place of women in the Fourth World on Apoklolips and elsewhere and what it meant. From Darkseid’s mother Heggra, to his disposed of wife Tigra, to the Beautiful Dreamer, to Granny Goodness, to Aurelie, Barda and the Female Furies it was clear that there were more stories to be told. So in entering this domain, I felt like I was picking up breadcrumbs that Kirby left and following his trail. For me and Adriana Melo, our aim was to have a story that could (if one so chose) neatly fit in-between the gutters of what was already in Kirby’s overarching story and enhance it. Something that gave a little more depth and breadth the women in that Fourth World and deepened its mythology. I ran in one direction by expanding Kirby’s Mister Miracle #9 using Aurelie’s death which is the catalyst for the “meet cute” of Scott and Barda and begins their love story. Meeting Scott Free is the moment that profoundly changes Barda’s life and awakens her to a new way of thinking and it begs for there to be more than is touched on in the telling of that story. So I used that as my inspiration, but trust me, there are plenty of other women and ideas in the Fourth World that I’d be interested in exploring. Kirby’s world is an ever compelling landscape to dream in.

Mitch Gerads (artist, Mister Miracle maxiseries): Throughout the making of MISTER MIRACLE I always felt the shoulder beneath my feet of the biggest giant in comics, but I also knew the best way I could honor his creation was to bring his creative spirit along for the ride rather than emulate that which he had already done.