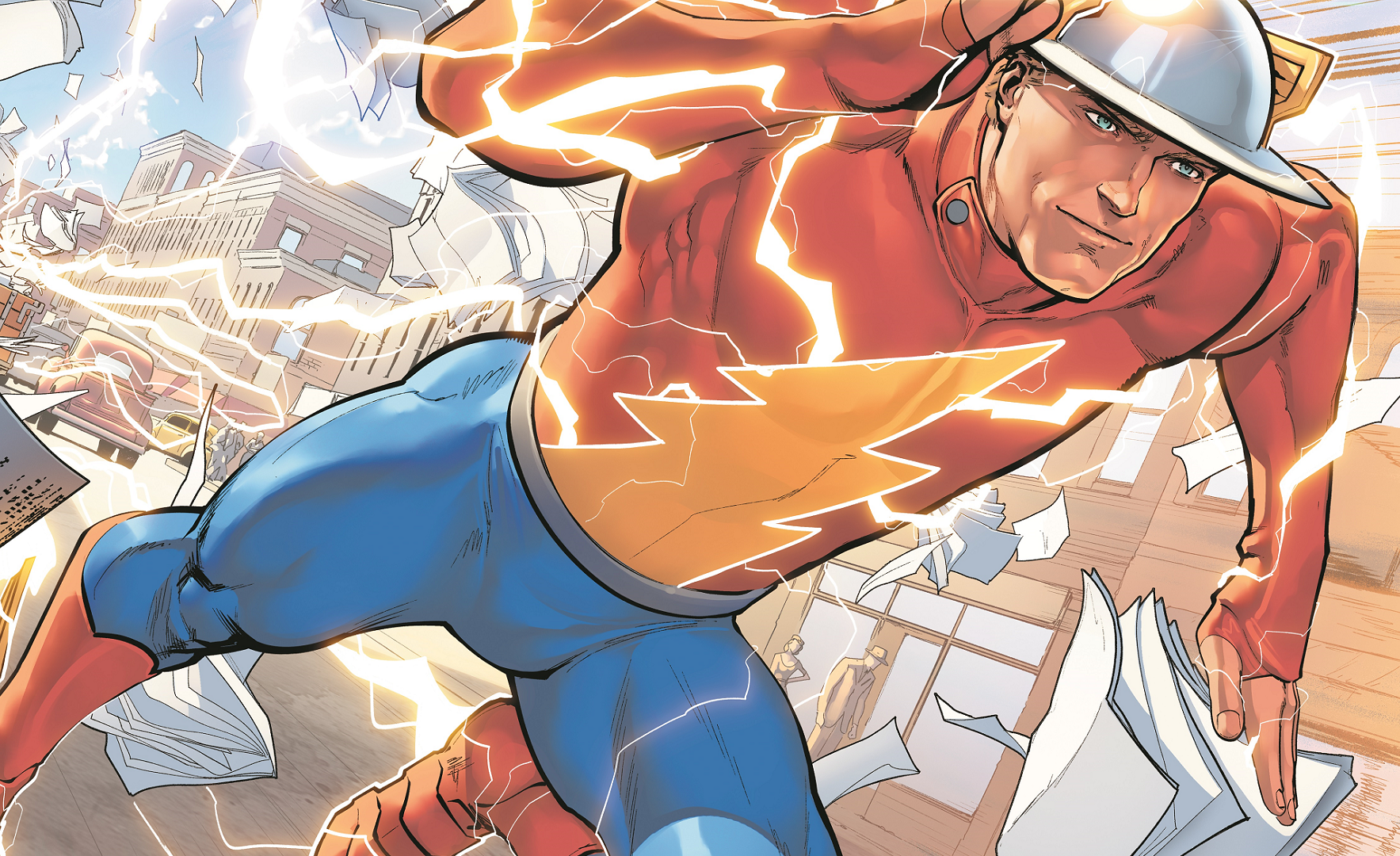 In the vast list of superheroes that exist within the world of DC Comics, arguably no one is more important than The Flash. Known for their legendary abilities of super speed, the various incarnations of The Flash are essential to making the DC Universe what it is today. In volume eight of TCN’s Cultured Spotlight, we will be showcasing the original Flash, Jay Garrick, as he appears throughout the parthenon of comics, television, film, and animation that make up the DC Multiverse.

Jay Garrick was created in 1940 by Gardner Fox and Harry Lampert under All-American Publications (one of the two publishers that would merge to become the DC Comics brand we all know and love) in Flash Comics no. 1. The comic depicted Jay as a young college student who, after an accident revolving around inhaling “hard water vapors”, gains the ability to move at supersonic speeds. Donning a crimson and blue suit, a yellow lightning bolt emblem, and a winged helmet reminiscent of the Roman god Mercury, Jay became the first superhero known as The Flash. The adventures of Jay Garrick proved to be wildly successful, and in 1941, he got his own comic title with All-Flash.

Throughout his run as the Monarch of Motion, Jay Garrick faced numerous villains such as the Fiddler, the Shade, and the Rival, using his super speed to put these dangerous criminals behind bars. Jay also served as a founding member to the Justice Society of America, a precursor to the Justice League filled with Golden Age heroes like Doctor Fate, Hourman, and Green Lantern (Alan Scott). In 1951, Jay finally retired from the superhero life to live with his newly wedded wife, Joan, until the speedster decided to dust off the helmet after the arrival of another Scarlet Speedster…

In The Flash no. 123, a ground-breaking issue of the Silver Age era of Flash comics, the second Scarlet Speedster, Barry Allen, meets Jay Garrick after traveling to the original Flash’s home of Earth-2. Having vibrated his molecules to a specific frequency while performing in a magic show (comics in the 60’s were wild), Barry accidentally ends up on an alternate version of his Earth and discovers an older Jay still in retirement. After a series of heists by a trio of villains, Fiddler, Shade, and the Thinker, the duo Flashes team up to save Keystone City. This comic was extremely influential in creating the one of the most prominent aspects of the DC Universe: the Multiverse.

Jay Garrick, played by Billy Mitchell, made his live action debut as a cameo in season nine of Smallville in black and white archive footage found by a young Clark Kent in the old headquarters of the JSA. The next notable appearance of Jay appeared in the CW‘s The Flash television series. In the first season’s finale, Jay’s legendary helmet appears as an easter egg prior to the final battle between Barry Allen and Eboard Thawne, the Reverse Flash, before the speedster himself joins the cast of season two played by Flash veteran John Wesley Shipp. Teddy Sears’s Hunter Zolomon, an evil speedster from Earth-2 known as Zoom, initially takes over the role of Jay Garrick at the beginning of season two, posing as that world’s version of The Flash to Barry Allen and the team at STAR Labs. Zolomon ultimately reveals his ulterior motives to take over Earth-1 and steal Barry’s speed, after Barry discovers the real Jay, hailing from Earth-3, being held as a prisoner in a speed-dampening cage. Finally being freed from his prison and regaining his identity after Zolomon’s defeat, Jay went on to become a mentor to Barry. The older, more experienced Flash was able to teach Barry more about the Speed Force, the mystical source of their powers, as well as the dangers and negative consequences of time travel. Jay also cameos as a member of the JSA in the Stargirl series, having been murdered by the villain Icicle and the Injustice Society prior to the events of the show.

Jay’s role in animation has been slightly more extensive than his live action appearances, showing up as a recurring character in classic DC shows such as Justice League, Batman: The Brave and the Bold, and Young Justice. He appears in season one of Justice League as an alternate version of himself known as The Streak. Along with his other members of the Justice Guild of America, The Streak is an inhabitant of an alternate Earth that exists as a comic book on Earth-1. It is later revealed that The Streak and the rest of the JGA had died in a third World War, but were brought back as an illusion by a child mutated with psychic powers caused by the Holocaust. Jay is also one of Batman‘s most prominent allies in The Brave and the Bold, fighting alongside the Caped Crusader against villains such as Scarecrow, Equinox, and Reverse Flash. A much older, retired Jay exists in the world of Young Justice, serving as the patriarch of the Flash family. Serving as a mentor to Barry, Wally West, and Bart Allen, Jay plays an integral part in leading the Flashes against the threat of the Light.