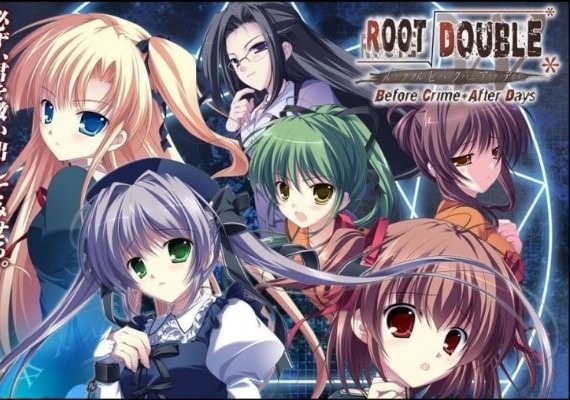 “Root Double: Before Crime * After Days” is a unique game that relies heavily on it’s well developed plot and the other ways it gets the player involved.

Root Double: Before Crime * After Days is a unique game that relies heavily on it’s well developed plot and the other ways it gets the player involved. This game was developed by Regista and Yeti and was initially released in 2012 for the Xbox 360 and PlayStation 3. We were given the opportunity to play it on the Nintendo Switch and this is how it went.

The story is the key piece to this game and you are given two different paths to choose from right from the start. You’re given the option to play as either Watase Kasasagi or Natsuhiko Tenkawa. If you choose to play as Kasasagi, you main goal of the game is to try change the future based on the events that take place, I’ll explain that later on. If you chose to Tenkawa, you’re main goal is to try and rewrite the past in a way. What sets the events of the game into place is an explosion at a certain laboratory that researches nuclear energy. The cool part about this game is that there are numerous ways the story can go. Kasasagi’s story has over fifteen different endings and Tenkawa’s story has only 5 endings.

The choices you make through each story will directly effect events later on in the game and it’s impressive how detailed it can be. There isn’t much “gameplay” at all because most of the time you’re reading what’s going on and making decisions from those events. The game does tell you when have the chance to make a pivotal choice. There is a graphic in the upper right hand corner that will glow either blue, yellow or red when it’s time to make a choice. This extravagant system is called the Senses Sympathy System. You can ignore some of the blue ones, and maybe some of the yellow ones, but when it lights up red, that means the choice has an impact on a possible ending. The choices are based off how you think the character should react or how you would react; but overall it’s about your trust in the character. This system is a little confusing at first, but after you die a couple times like I did, you’ll figure it out.

The visuals in this game were really good. The anime art style was nice and helped give the characters they’re personalities. The subtitles at the bottom of the screen weren’t as bad as I was thinking they would. They fit nice and snug on the screen and don’t take away anything from the game’s art. I would’ve liked more options for the subtitles, but there really isn’t anything to complain about with how they are. You do have the option to control how fast they move across the screen; you can even set it to where it automatically moves on to the next subtitle box. If you do it that way and accidently miss something, the game does let you go back and read the chat log. Overall, there wasn’t much to the visuals other than how good the art was.

The controls were very limited in this game. That isn’t necessarily a bad thing though. The only controls you have to worry about it accidently skipping the dialogue. Other than that, you have to make sure you press the + button when prompted to make a decision. Since this is a novel video game, controls aren’t very important.

In my opinion, the soundtrack plays a vital part in the game. Since this is a novel video game, you rely on the story and art to make it what it is, but you also need a good soundtrack for the player to listen to while they progress through the game. The music is good in this one. It manages to get intense when needed and provides an almost upbeat tone through most of the game. It’s kind of what you’d expect in something anime related. The tone of the music does change depending where you are at in the story; like I said before, it intensifies during certain moments. It keeps you pulled in. The music fits with the anime style of art, as I mentioned above. This isn’t a soundtrack that you’re going to get lost in, but it’s nice to listen to while you play the game. The intro song is really good too.

Other than the soundtrack, there really isn’t much else to discuss when it comes to the sounds in the game. The characters do speak Japanese, but since you have subtitles, there isn’t anything to worry about.

This pretty much has limitless replay value because of how it’s designed. With each choice that is presented, there are multiple routes to take with in turn can change the outcome of whatever path you’re own. Since there are two character arcs to choose from, there are a lot of you can make each story change. Playing as Kasasagi was fun because of all the potential endings there are. Plus, if you’re like me and really into a good story, you’ll want to revisit the story anyways to see if you could’ve done anything differently. It can also get confusing at times, so you might not understand everything on your first playthrough.

Overall, this game was a fun experience. It’s not often you find a game like this that doesn’t leave you wanting more. Root Double: Before Crime * After Days leaves you happy with everything. By that I mean that you’re not left thinking that something was missing that could’ve made it better.

Below you can check out the trailer for Root Double: Before Crime * After Days:

TCN was provided a review copy of Root Double: Before Crime * After Days on the Nintendo Switch for the intent of review purposes by the publisher/PR.