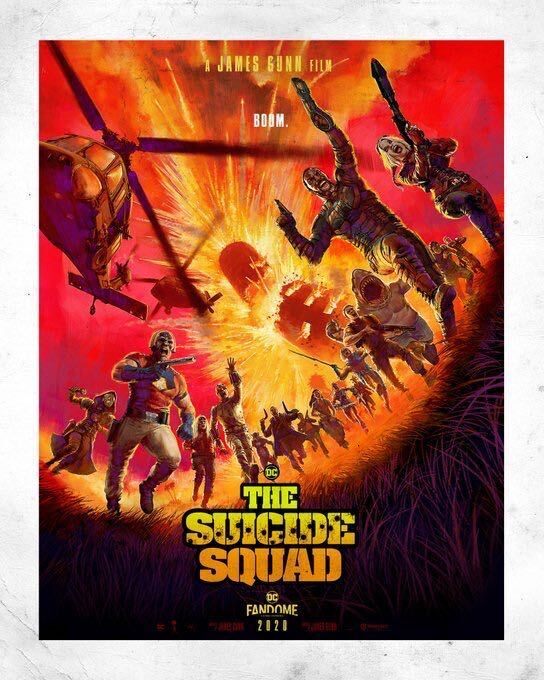 James Gunn reiterates that no one is safe as more images of “The Suicide Squad” are released by Empire.

New official photos from James Gunn’s The Suicide Squad have been released. Gunn has also gone on to confirm that he was given full creative control and that no character was protected by Warner Bros. Therefore, his film could build anticipation of the unexpected.

“Don’t get too attached.” That has been the quote that James Gunn, alongside the cast of 2021’s The Suicide Squad, have been repeating to fans. Gunn, who has directed films like Super and Guardians of The Galaxy Vol. 1 and Vol. 2, is no stranger to interacting with fans through all his social media platforms. First, he shared official photos from the film released by Empire.

You can check out the photos below:

Alongside these images, Gunn spoke in an interview about the differences between his film and David Ayer‘s Suicide Squad released back in 2016. When asked about it, he stated, ““Um, it’s its own thing. It does not contradict the first movie, I don’t think. It might in some small ways… I don’t know…” Nonetheless, he dived deeper into the subject, later in the interview, by answering the following:

“Listen, David Ayer’s gotten trouble for the movie. I know it didn’t come out how David wanted it to come out. But he did one really, really great thing, and that is he picked fantastic actors to work with, and he dealt with these actors in building their characters in a really deep and fearless way. It’s something David definitely deserves to be lauded for, and it’s definitely added to this movie.”

He also explained how working with DC for this movie was different from Marvel Studios’ Guardians of the Galaxy films because of the creative freedom he received. This creative control means that no character was protected even if they have a “franchise armor,” like Harley Quinn. He gave detailed insights about this to the October 29, 2020 issue of Empire, as well to a fan on his Twitter.

“I think you know, from pretty close to the beginning, that all of the Guardians are good – apart from Nebula, who’s the outlier. But in The Suicide Squad, some of the characters end up being good, some end up being terrible. They don’t just get in fights and say they’re going to kill each other, they actually do get in fights and kill each other. You really don’t know who’s going to live and who’s going to die. I was given full freedom to kill anyone – and I mean anyone – by DC.”

A fan also used GotG’s Yondu, played by Michael Rooker, as an example to question the legitimacy of a comic book character’s on-screen death, which Gunn replied to with:

It is fair to point out that Rooker will play Savant in The Suicide Squad. The film will feature a star-studded cast with Margot Robbie, Joel Kinnaman, Jai Courtney, and Viola Davis reprising their roles from 2016’s Suicide Squad as Harley Quinn, Rick Flag, Captain Boomerang, and Amanda Waller, respectively. Joining them will be Idris Elba as Bloodsport, John Cena as Peacemaker, Pete Davidson as Blackguard, David Dastmalchian as Polka Dot Man, Nathan Fillion as TDK, Daniela Melchior as Ratcatcher II, Mayling NG as Mongal, Peter Capaldi as Thinker, Alice Braga as Solsoria, Flula Borg as Javelin, Steve Agee as King Shark, with Sean Gunn as Weasel, and Taika Waititi playing an undisclosed role.

The Suicide Squad is still expected to be released on August 6, 2021.

Who will not survive? Sound off in the comments below and stay tuned to The Cultured Nerd for more updates.