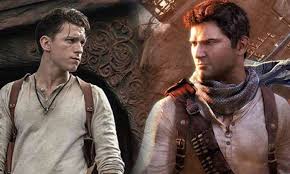 Tom Holland introduces us to Nathan Drake on his Instagram

Tom Holland has officially released a first look photo of himself as Nathan Drake in the upcoming Uncharted film adaptation. The photo was posted on his personal social media, showcasing what he’ll look like on film.

The Uncharted film adaptation has been through development hell, but it seems like this current iteration is sticking. As of right now, Ruben Fleischer (Venom, Zombieland) is directing with Mark Wahlberg co-starring with Holland.

Based on the action-adventure video game Uncharted: Drake’s Fortune from Naughty Dog and Sony Interactive, the story follows a descendant of explorer Sir Francis Drake, a treasure hunter named Nate Drake who believes he has learned the whereabouts of El Dorado, the fabled South American golden city, from a cursed golden statue. The search becomes competitive when a rival hunter joins the fray, then is escalated when creatures — actually mutated descendants of Spaniards and Nazis — begin attacking those hoping to learn the treasure’s true secrets.