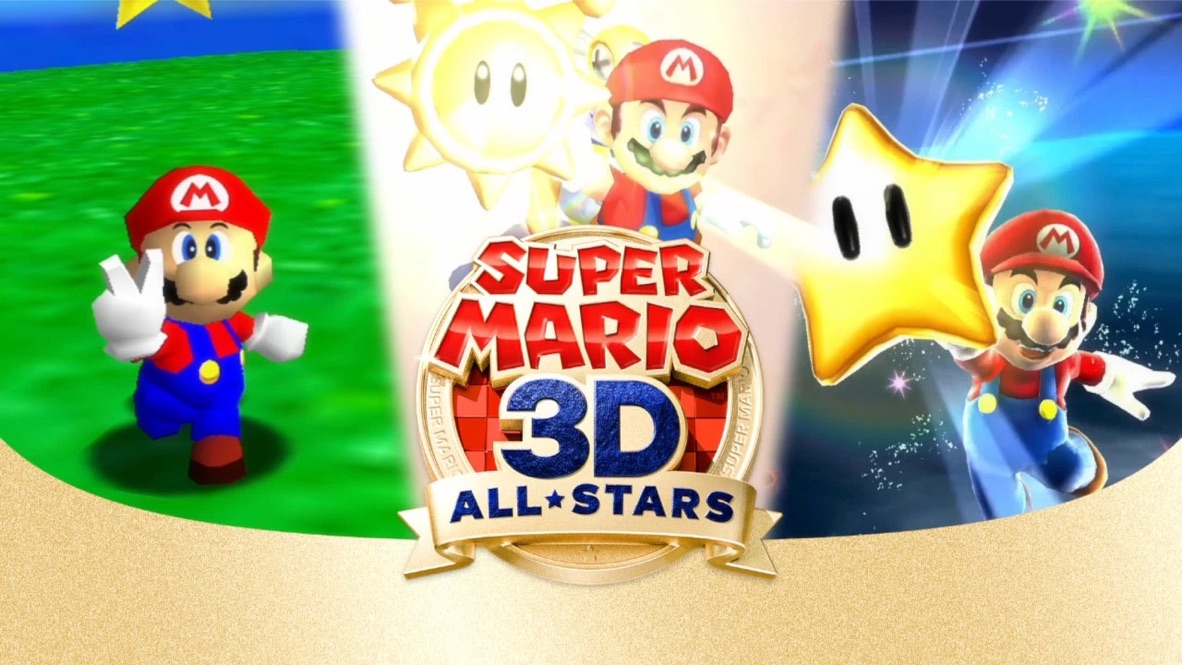 Nintendo knew that they could cash in on the nostalgia of our collective childhoods by re-releasing older titles with minor tweaks and updates to make them fit in with the newest generation of gaming, and that’s just what they did.

I have always loved the Super Mario series. The first game I ever played was Super Mario Sunshine for the Nintendo GameCube, so you can imagine the rush of pure dopamine that went through my brain as I booted up the game again for the first time since I was a child. Sunshine, along with Super Mario 64 and Super Mario Galaxy, was instrumental in shaping the childhoods of millions of consumers, and with a precedent already set by 1993’s Super Mario All-Stars, the decision to remaster all three games and release them as one unit is nothing short of inspired.

Super Mario 3D All-Stars is, simply put, a triumph. Nintendo, the Disney of home console gaming, knew that they could cash in on the nostalgia of our collective childhoods by re-releasing older titles with minor tweaks and updates to make them fit in with the newest generation of gaming. It’s something they’ve done for years with the Zelda series, and the Pokémon and Metroid series too are no strangers to remakes. Given that these games are not remakes in the traditional sense (one-to-one updated versions built from the ground up with new assets and new additional features), but rather remasters (enhanced ports of the games with minor tweaks to their gameplay and presentation), this review will focus less on the games’ individual plotlines and more on the things that differentiate them from their original versions.

First up, the game that launched Nintendo’s mascot into the third dimension. Visually, not too much has changed. Unlike the game’s DS remake, this version of Super Mario 64 feels ripped right out of the Nintendo 64’s cartridge slot. The game’s text has been made crisper, and gone is the blur that coated the game’s presentation. Edges are sharp as knives, and the HUD has been given a full 720p HD face lift. The game also benefits greatly from the Switch’s Pro Controller. Gone are the days of having to awkwardly shift hand positions to adjust the camera or fight against the Nintendo 64’s stiff control stick. Instead, the Pro Controller helps make up for the game’s sometimes unresponsive commands with a silky smooth control stick and button setup.

The game’s biggest cons are carried over from the game’s initial release: A lack of available 1-Ups, needless barriers to progression in the form of unlockable power-ups, and what is by far the worst part of the 64 experience, the camera. Not only can Lakitu, the game’s camera operator, only snap to eight angles, he has a tendency to either A) get stuck on walls (presumably in a futile attempt to prevent clipping) or B) revert right back to the unhelpful angle you were attempting to move him out of the moment Mario starts moving again. Jolly Roger Bay and Tick Tock Clock, I’ve found, are by far the worst offenders, although camera issues tend to plague almost every level, with the exception of The Princess’ Secret Slide and Big Boo’s Haunt. In The Slide, the camera is firmly fixed behind Mario, so any mishaps with the camera are most likely the fault of the player attempting to see around the next turn. Big Boo’s Haunt, meanwhile, makes use of dynamic camera angles to fight against the claustrophobic feeling of being trapped in a haunted mansion, and it works wonderfully, enhancing both the gameplay experience and the viewing experience. Often times bits in Big Boo’s Haunt look like something straight out of a Goosebumps book, which I’m sure is what the developers were going for.

Super Mario Sunshine. Where does one even begin with the game that made me into a certified Mario fanatic? One could start with the game’s too-tight controls that make precision platforming both fun and infuriating. One could also start with the camera, which while much improved from 64, with a full range of motion Lakitu could never dream of, is still prone to getting caught on obstacles and behind buildings. Or one could start with the sheer amount of padding in the level progression, with repetitive red coin missions and Shadow Mario chases propagating each level to the point where it feels like a crying shame that the levels weren’t fleshed out to their fullest potential. There’s a lot one could do with this game’s ideas: On paper, a tropical paradise defaced and covered in ink as the setting for a fun platforming romp with gaming’s most beloved icon sounds like a game designer’s dream. Alas, the game’s rushed development is well-documented, so it’s no secret as to why most levels feel like they’ve only reached half of their potential.

Still, despite all of this game’s flaws, there’s something magnetic about Sunshine that places it a rung above 64 and Galaxy in my eyes. The widescreen support and 1080p visuals only highlight the already impressive visuals of the GameCube. And sure, it may just be the nostalgia goggles clouding my judgment, but everything from the game’s attempt at an ambitious and complex story (something the series has yet to replicate) to the game’s insistence on the player to dig around every nook and cranny of Isle Delfino, the game’s hub world, for the secret levels and Shine Sprites that are hidden, quite literally, everywhere, make the game feel alive in a way that 64 and Galaxy just don’t. There’s a sense of community to Isle Delfino that makes the player feel good about restoring it to the tropical paradise it once was. While the immersion is often broken by the boot-out system that plagues every one of these games, there’s something downright cool about being able to look out into the horizons and see areas you have yet to explore. Sunshine has something that a lot of games from the GameCube era have, and that’s heart. And that heart is what keeps drawing me back to Sunshine every time I climb the tower in Whomp’s Fortress or go hunting for purple coins in the Beach Bowl Galaxy.

Oh boy, it’s the big one. Super Mario Galaxy, released on the Wii all the way back in 2007, changed the landscape of gaming forever… Or at least until the motion control craze died down and Microsoft and Sony stopped trying to copy Nintendo’s remote-waggling money printer. Galaxy currently sits as the highest-ranked platformer on review aggregate Metacritic (followed closely by its sequel Super Mario Galaxy 2), and there’s a reason for that. Galaxy is a gaming experience like no other, with controls that are intuitive and responsive, visuals that would make Ridley Scott gasp, and level design so brilliant that Nintendo has spent the last decade trying to one-up it. For the first time in a 3D Mario title, lives aren’t scarce to the point of absurdity, and the game’s story, should the player go out of their way to uncover it, is emotionally complex in ways the Mario series has never been able to replicate, with more tearjerker moments than anything the gaming juggernaut has put out this year (the sheer beauty of seeing Slowpoke finally go fast in The Isle of Armour is a close second).

Super Mario Galaxy has benefited the most from the graphical facelift it’s received; Not because it was the most in dire need of improved visuals. That title goes to the low-poly charmer that is 64 (Don’t believe me? Take a look at Bowser when you get a chance). No, Galaxy is the most improved because it was the most held-back by its system’s hardware. While 64’s low-poly look is understandable given the game’s 1996 release date and Sunshine went for a more timeless, quasi-cel-shaded look, Galaxy’s ambitious visuals were held back by the Wii’s retrospectively atrocious 480p display. On the Switch, running at a crisp 1080p docked, Galaxy looks, in a word, stunning. Whereas the rays of light emerging from a meteor or the glow of the crystal-clear water would previously be accompanied by a blur, a fuzziness that was just prevalent enough to distract from the majesty of space, the crisp, rounded edges of the Switch propels Super Mario Galaxy into the stratosphere.

Docked, Sunshine and Galaxy run at a beautiful 1080p definition, while 64 runs at a respectable 720p. Handheld, meanwhile, each of the games run at 720p. With less of a need for the finest HD visuals on a screen so significantly smaller, the 720p display gets the job done while still retaining the Switch’s impressive visual performance..

Out of the three games, Galaxy unambiguously controls the best. Mario moves, turns, and jumps more fluidly than 64 or Sunshine, and the window to perform a triple jump or a ledge grab is significantly larger than the other two games. With the jump to the Switch comes a challenge for Galaxy, and that is how to port the motion controls so integral to the game’s gameplay. While docked, the player here has two options: Option A) Use two Joy-Con controllers to simulate the Wii Remote and Nunchuk used during the game’s initial release. As for the second choice, Option B) The Switch Pro Controller can be used to control Mario similarly to how he controls in 64 and Sunshine. In this setup, my preferred way to play, the spin is mapped to the Y button, and the cursor that is used to collect and shoot star bits is controlled by pointing the pro controller at the TV.

I will admit, after growing up 100%ing Galaxy multiple times over, pressing Y to spin certainly took a bit of getting used to. Fortunately, if ever you’re craving a bit of that classic Galaxy action, you can simply switch over to the dual Joy-Con setup and play that way.

The game comes with the soundtracks to each of its titles. The compositions in all three games have aged wonderfully, and it’s a true delight to scroll through the soundtracks of Sunshine and Galaxy to listen to the themes from Ricco Harbor and Good Egg Galaxy for the 30th time. Oddly enough, the intro of the game, a short scene showcasing the animations for the collection of each game’s golden MacGuffins, plays the fanfare of the Power Star collection from Super Mario Galaxy 2, an odd decision considering that Galaxy 2 is 3D All-Stars’ most glaring omission. A hint of things to come perhaps?

Super Mario 3D All-Stars has, by design, something for everyone. Whether that be taking a stroll down memory lane with old childhood favorites, dipping your toe into the world of 3D platformers for the first time, or giving a fair shake to a title you’d previously discounted as being before your time, there’s something for everyone to love, enjoy, or at the very least respect in what may be Nintendo’s most self-serving of accomplishments. And while I’ll always come back to Sunshine, 64 and Galaxy will always be welcome distractions, waiting in the coin-covered wings of the legendary Sand Bird.