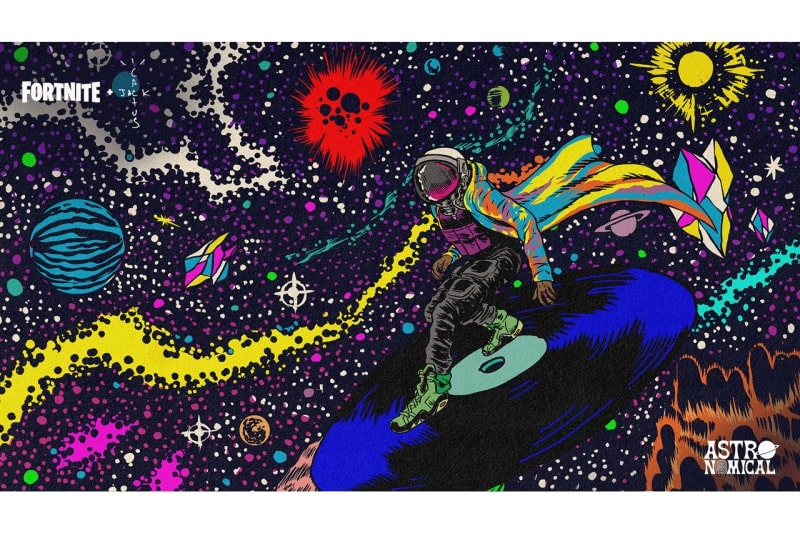 Epic Games’ Fortnite has been notorious for hosting live In-Game events by collaborating with the latest and the most popping artists of varying genres in the entertainment industry. This time, they’ve collaborated with rapper Travis Scott to host an In-Game live concert starring the rapper himself. He is also using this stage to reveal his upcoming track “The Scotts” in which he partners with Kid Cudi.

The event was almost 10-12 minutes long which saw the concert span the entire stretch of the map in a plethora of Neon lights and special effects which was not only visually stunning but also gave a sense of thrill and satisfaction of being a part of the event. The event kicked off with a hovering Astroworld Carnival Island approaching the place of the concert (Sweaty Sands) while Sicko Mode plays in the background followed by a bright explosion that saw a skyscraper-sized Travis Scott emerge as he began his “performance” sporting his coveted Jordan Ones.

The concert featured his hit tracks like Sicko Mode, Highest in the Room, Goosebumps, and Butterfly Effect and revealed his latest upcoming collaboration with Kid Cudi called The Scotts which was officially released on all music streaming platforms earlier today.

Additionally, the game also gave away a free glider and 2 loading screens to the players who attended the concert. The game also introduced new challenges when finished, would earn the player new emotes in collaboration with the event. The promotional events also included new items included in the item shop like new back blings, skins, and a pickaxe.

Fortnite was previously bugged with issues like long waiting times in the lobby right before an event or major glitches in the event itself. However, to avoid problems like that, Fortnite has instructed players to be in the game 30 minutes before the concert begins where the lobby gives you the option to only enter the event and voiding the other playable mode options. They are also hosting the show 5 times in a span of 2 days with different timings for different server regions. Props must be handed to them as it definitely seems like they’ve done their homework with this event!

This is not Fortnite’s first live event concert featuring an artist in the game. They collaborated with popular music producer and a long time Fortnite enthusiast in Marshmello back in Feb 2019 which saw the artist be the host to a 10-minute long live In-Game concert in which he played many of his famous tracks like Alone, Chasing Colours and Happier.

According to a report by Epic Games, the event garnered more than 12 Million views in the first show itself setting an all time record for the most concurrent players in a video game. In comparison, Marshmello‘s concert attracted a total of 10 million players in the event worldwide and an additional million online. The viewership count for the Astronomical Concert is only likely to keep growing due to the pandemic which is pushing people towards online games and streaming services.

Did you get a chance to catch the event? Let us know in the comments!