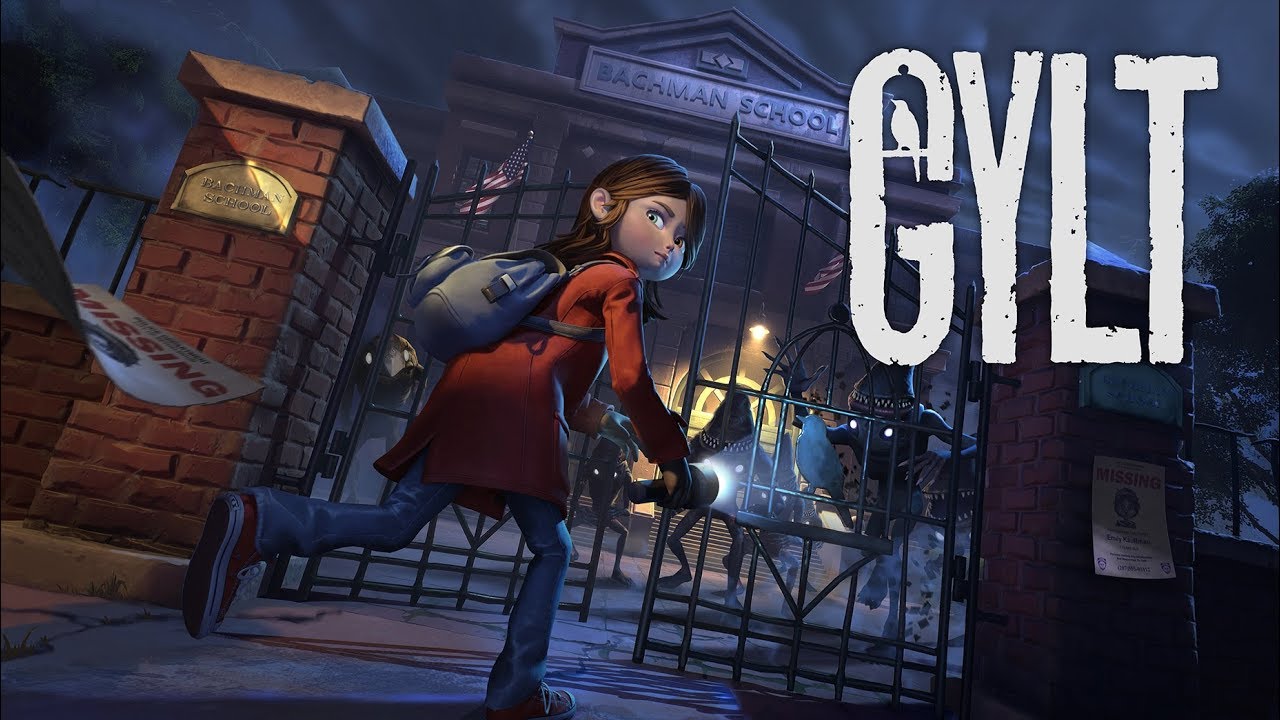 With a visually pleasing art style, consistently unnerving atmosphere, and engaging stealth mechanics, Gylt manages to be an enjoyable six-hour experience despite a relatively flimsy narrative.

Gylt (2019) is a third-person horror-lite adventure from Tequila Works (Deadlight, Rime) and a Google Stadia Exclusive, available through the currently free two-month trial of Stadia Pro. With a visually pleasing art style, consistently unnerving atmosphere, and engaging stealth mechanics, Gylt manages to be an enjoyable six-hour experience despite a relatively flimsy narrative.

You play as Sally, a young girl who has been relentlessly searching for her missing cousin Emily. Sally unwittingly enters another dimension, discovering that the town has suffered some kind of devastation and that Emily has been trapped there for some time. Sally must find ways past (or through) several types of monsters and reach Emily so the two of them can escape. To a certain extent, players can receive a different ending to the story (at least three).

At its core, Gylt is a stealth game. There are fetch quests and puzzles, but most of the gameplay occurs in how you dance around the enemies in your path. After learning how to stealth, you will eventually receive limited opportunities to fight, if you prefer that approach. The game routinely adds mechanics, thoroughly tutoring you through each obstacle. Although horror game veterans will find these mechanics familiar (if not elementary), Gylt creates an effective introduction for teens or anyone new to the horror genre.

“This game deals with sensitive topics. If you have been impacted by bullying and need help, please contact a professional.”

Gylt‘s theme focuses on bullying, and the environment is slathered in references to this. Some are intriguing and subtle, such as the canary imagery sprinkled throughout. Other instances feel heavy-handed.

Sally is a genuinely empathetic character whose story is an attempt at a fresh perspective on a difficult topic. However, her role is more observer than actor, and the trail she follows ends up being one-note and predictable. Extra flavor elements seem to lack purpose and only add clutter instead of depth. These unresolved threads and Sally’s unfulfilling arc as a protagonist leave Gylt with a skin-and-bones narrative.

The most steadfast aspect of Gylt is its horror atmosphere. The “Teen” rating makes it far too mild for a direct Silent Hill or Outlast comparison, but it certainly takes inspiration from them. Every level delivers a thick dose of “spook,” with murky corridors, limited field of vision, and creepy silhouettes. As there is no gore for Gylt to rely on, you are instead stalked by a sense of utter dread. You’ll not experience jump scares so much as being constantly unnerved: something topples over out of the corner of your eye or a distant figure twists in your direction.

Audio cues are especially well-executed. Clicks, slurps, husky breathing, or eerie singsongs can alert you to nearby enemies. Tense, drawn-out stringed instruments can quickly escalate to sharp brass footsteps that urge you forward when you’ve been spotted. The dramatic whimsy of the music along with the charmingly creepy art style definitely lend Elfman/Burton vibes to the atmosphere. My favorite moments were surprise crescendos from complete silence, which added a certain drive to the pacing.

From a technical standpoint, the controls are rather standard. Gylt is currently only supported for PC, so expect a typical WASD movement system with your mouse as camera and weapon control. (Players do have the option to tailor the keybinds to their play style.) The movement was not as responsive as I would have liked, especially in timed events or boss fights, but it was manageable during most of the levels. I also noted that the inventory controls seemed to alternate between mouse and keyboard (frustrating but not unusable).

Considering Gylt is an exclusive title on the relatively new Stadia platform, it performed smoothly. Loading times were comparable to what one might find on games accessed through Steam, without having to download the game. Autosaves were plentiful, and it took only a matter of seconds to close or reopen the game if I needed to step away. However, performance will be strongly linked to the quality of your internet connection. I did experience some network latency a few times, causing severe delays in-game that eventually disconnected me.

There is some replayability value to Gylt, if you are a completionist or if you disliked the ending you got. Collectible items are hidden in every level, some of which may affect the ending. However, the challenge will be diminished on multiple replays, as the game remains linear and there aren’t many options to add difficulty.

Overall, I thoroughly enjoyed Gylt, especially as my first foray into the Stadia platform. While the story is unfortunately lacking full realization, the suspenseful horror elements are brilliantly done. I would recommend it for the artful atmosphere alone, and I plan to revisit the game eventually. Gylt is an appropriate offering for anyone venturing into the horror genre or just looking for a fun spooky adventure.