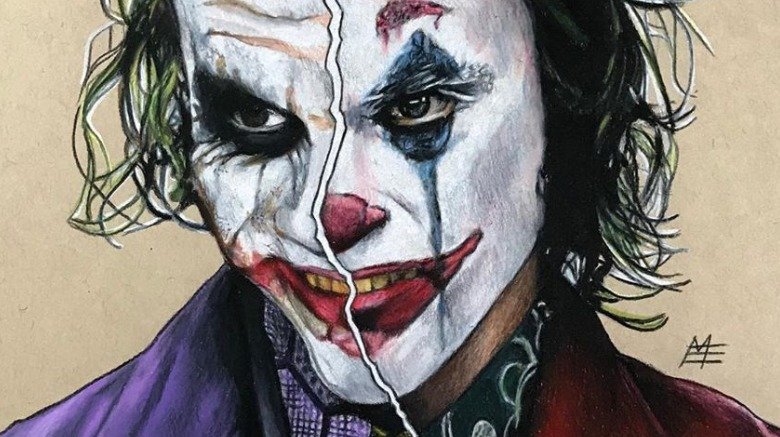 Into the minds of the Jokers.

Every Joker until date has been presented in different wide-ranging perspectives. I will be analyzing the character arcs of Christopher Nolan’s Joker portrayed by the late Heath Ledger and Todd Phillips’ Joker portrayed by Joaquin Phoenix.

Ledger’s Joker draws much from this philosophy and works towards telling people that “One bad day” in their lives is enough to make people believe that his perception of reality is the truth. Now, Joaquin’s Joker may or may not reach there in the future, but currently, he is dealing with and becoming the aftermath of his own series of bad days.

While Joaquin is still coming to terms with the fact that the world outside is crazy, Ledger’s Joker already believes in that reality. We see Joaquin gradually losing control of the reins controlling his sanity and we finally see him unleash it upon the world, while Ledger is on a constant endeavor to make sure that everyone out there loses control of their sanity and be “a dog chasing a car and not knowing what to do once you’ve caught up with it”. Ledger’s Joker envisioned people just “doing things”.

Interestingly, the reality that Ledger’s Joker works towards in The Dark Knight ends up becoming the reality of Joaquin’s Joker at the end of the movie – People defying the law and order and revealing their true selves to the world.

Ledger’s Joker was honestly, at the heart of it, a conniving sadist.  The rules for the above quote apply to Ledger’s Joker while it does not necessarily apply to Joaquin’s Joker. I believe that one major quirk that splits them apart is – Sadism. Ledger’s Joker from the get-go always wanted to send a “message” to the people by using live props as examples whereas Joaquin’s character is just another man who’s trying to adjust to the ever-changing world around him and ultimately failing at it.

Ledger’s Joker is mostly loud and raspy when he talks, whereas Joaquin’s Joker is eerily calm and orotund. Joaquin’s laugh, however, separates the two. Joaquin’s laugh is anxious, rising in pitch and never genuine. His laughter is either triggered by his condition or in a mockery of what he’s witnessing. Ledger’s laugh, on the other hand, is as if someone is tickling him. He knows the laugh is unsettling and sometimes, if not all the times, he uses this as a weapon to unnerve his target.

At the end of the day, it all comes down to madness and insanity. Joaquin’s Joker was gradually descending into the pit of insanity while Ledger’s Joker dove headfirst into it and, wholeheartedly embraced it