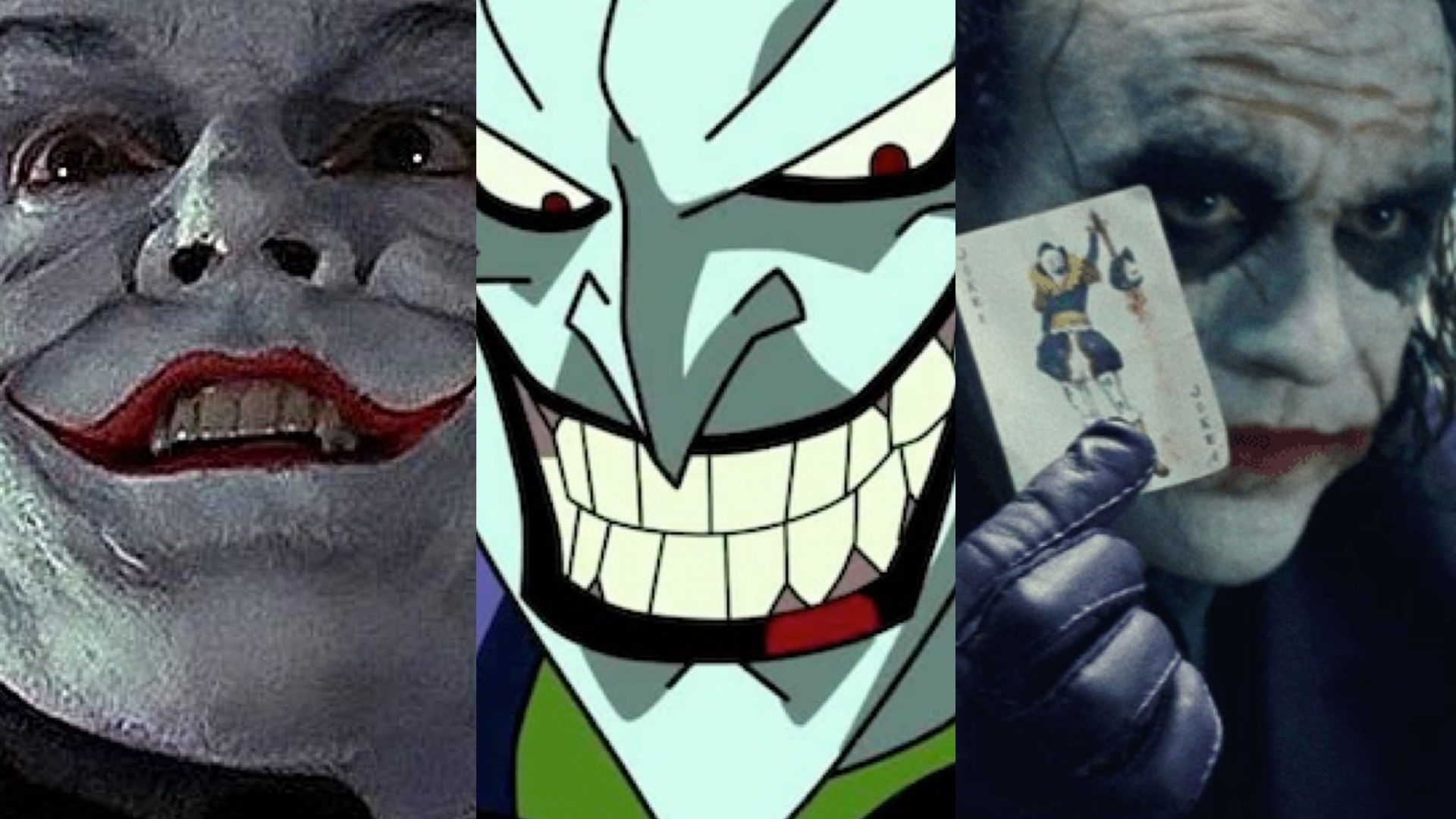 Nicholson, Hamill, and Ledger walk into a bar…Ha Ha Ha!

The long awaited, highly anticipated Batman: Three Jokers miniseries is set to hit comic book stores this summer. Writer Geoff Johns and artist Jason Fabok say they have completed their work and that the first issue will be seen June 17th, of course, pending any delays caused by the notorious Covid-19 virus.

Johns and Fabok teased the idea of Joker’s origin, or multiple origins at that, in Justice League #50 and DC Universe Rebirth #1. Three Jokers, from three eras. Rumored to be the Joker from Golden Age, the Joker that took the crowbar to young Jason Todd, and the Joker from The Killing Joke. The latter two drastically changed the future for Todd, the Gordons, and Bruce Wayne.

In anticipation of the comic book miniseries, lets take a look at the top three modern day Jokers that have graced the silver screen, the “Telly”, and the video game world.

Fresh off the wildly popular Beetlejuice, Tim Burton brings his off the wall, dark yet colorful style to Gotham City. Burton does an amazing job encapsulating Gotham in a quite literal dark, gloomy, and crime ridden setting that the shining contrast throughout the film is Jack Nicholson’s Joker. From the green hair, white makeup, red lips, purple suit to his over-the-top smile, to his deathly pranks and charismatic stature, the villainous Joker in 1989 is, oddly enough, the bright spot to the city shrouded in darkness.

Burton takes liberties in creating his own origin for the character. Instead of having Joe Chill as the thug to murder Thomas and Martha Wayne, he lets Jack Napier be the one to pull the trigger. Thus “creating” Batman in a young Bruce Wayne looking for vengeance. This also helped Burton build up the drama between hero and villain as the Joker blames Batman for creating him!

Burton and Nicholson, at the time, created the quintessential big-screen Joker. Far from the campy comedic tone of Cesar Romero’s take on the Clown Prince, Nicholson’s gangster takes a dip in the green acid and pops out a homicidal maniac. He did everything you’d want to see from the Joker. Electrocuting handshake, flower squirting poison, chattering teeth, oversized hand gun, handgun with a “bang” flag that pops out, etc. He had a good time being brutal, he shoots his “number one guy” (Bob) without a hesitation, gangsters were scared of him, the city Gotham was in terror, and yet he got them all out for a parade with his charisma (and a million dollars). His jokes are twisted and witty, he kills without remorse but with a laugh, and he gives us the best quote, in my opinion, of any Joker.

“Have you ever danced with the Devil in the pale moonlight?”

Fun Fact: Robin Williams was also a candidate for the role of Burton’s Joker, now that would’ve been something else entirely.

From being the galaxy’s only hope, to terrorizing animated Gotham for decades, Mark Hamill is the choice by many as thee Joker. Although he was never cast as a live-action Clown Prince on the big screen, Hamill is the actor that has been able to portray the character’s journey through different mediums over 3 decades.

What I truly love about Hamill’s Joker is the relationship he has with Batman. The cat and mouse game they have over the years on BTAS, carrying over to other cartoons like Superman: The Animated Series, The New Batman Adventures, Justice League, and my personal favorite animated flick, Batman: Mask of the Phantasm. Years later he reprises his roll in Rocksteady’s critically acclaimed Arkham games trilogy, where he and longtime voice acting parter Kevin Conroy (Bruce Wayne/Batman) continue their battle of good vs. evil.

One of the best parts of this Joker is that those of us who grew up watching the animated series, were adults adults by the time Rocksteady’s games came out. The game reflected an older and darker tone as we kids were experiencing the tougher world of adulthood. And just as kids grow up, so did our Saturday morning versions on Batman and Joker. Again, the relationship between these two, helped by phenomenal voice acting of Hamill’s Joker and Conroy’s Batman, is bar none. No one had a better laugh than Hamill’s Joker and it only got raspier and more sinister as the years went on. To me the perfect example of their relationship is the end credit scene of Arkham City where the Joker leaves a voicemail for Batman, singing “Only You” to the Caped Crusader.

Fun Fact: Tim Curry (the original Pennywise from (‘IT’) was the voice of the BTAS Joker but had bronchitis and was fired. The rest is history.

Let’s just say it. Heath Ledger’s performance as the Joker is the best on-screen performance there is. Even Hamill has gone on to say that Ledger’s Joker was the most original performance since Anthony Hopkins’ Academy Award winning Hannibal Lecter in Silence of the Lambs. Very high praise coming from, at the time, the most beloved Joker. Nicholson on the other hand, was said to have warned Ledger about taking the role of the Joker.

His death prior to the release of Christopher Nolan’s The Dark Knight was devastating news for everyone. I think that made the performance even more surreal. He gave his life to this role. When his character reveals his face in the opening scene, to the end where he’s hanging upside down, I still couldn’t see Heath under that makeup. His voice, his mannerisms, the little ticks that went into this Joker erased the “10 Things I Hate About You“ persona. It was known that he would get only a few hours of sleep and holed himself in his apartment for a month to prepare mentally for this role. The scene where the Joker crashes Wayne’s party was the first time Michael Cain and Maggie Gyllenhaal saw Ledger in full costume. They were so scared of him during filming that Cain forgot his lines and Gyllenhaal couldn’t look at him. He had become the Joker

The Dark Knight stands as one of the greatest comic book movies ever to be made and Ledger’s performance was front and center in a most powerful, unforgettable way. The disappearing pencil trick got everyone’s attention, this wasn’t going to be a jokey-Joker. No, this was going to be a fear-striking Joker. Manipulating the heist in the beginning was genius from a mad man, turning Gotham’s White Knight into Two Face, causing city wide panic with “a few drums of gas and a couple of bullets”. The Clown Prince had arrived in a big way. All that being said, the scene that really gave me chills, and still does when I rewatch it, wasn’t what he did or how he looked, it was his voice.

Fun Fact: Heath Ledger wanted to be Christopher Nolan’s Batman, but that ultimately went to Christian Bale. Things could have turned out quite different

There are two other Jokers that I would have loved to see more of. One is Jared Leto’s version. I very much believe that if the critics and “fans” didn’t completely bash Batman V Superman, then Warner Bros wouldn’t have stepped on the throat of David Ayers’ Suicide Squad that supposedly cut out 30min of Leto’s Joker. The relationship between Leto’s Joker and Ben Affleck’s Batman would have been one to see grow over the years. Sadly, we wont get to see any of that.

The other Joker would be Joaquin Phoenix’s version. I loved the movie, I loved the performance. Todd Phillips did a fantastic job letting us in the mind of Arthur Fleck who eventually becomes the Joker. It’s just that he was only the “Joker” in the last act. Give me more of that, and Phoenix moves into my top 3.

Nicholson, Hamill, and Ledger are my three Jokers. Each in their own right, in their own era, were absolutely true to character and different at the same time. With Johns and Fabok creating a storyline with three different Jokers, could we possibly see a film adaptation in years to come? Let’s hope so.

2 thoughts on “[TCN Original] The Man, The Myth, The JOKER”