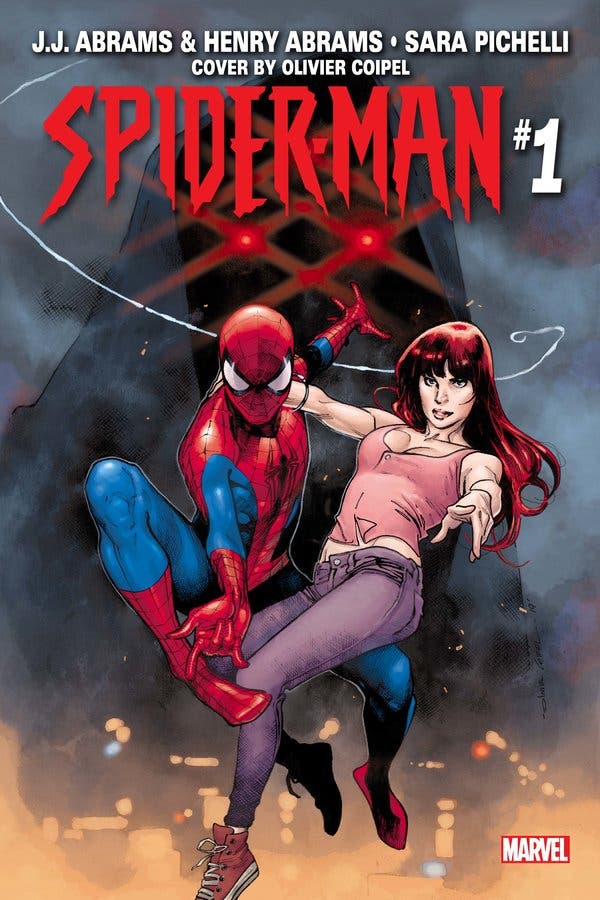 Back in June 2019 a webbed “4” appeared on Marvel’s Instagram page. The theories immediately started flying; was it going to be about the newest Spider-Man movie? Were we already getting a new Spider-Man game or maybe even an Into The Spider-Verse sequel announcement? What was going to happen when the countdown reached zero? On that day we were treated to JJ Abrams appearing onscreen with his son. They announced they would be writing a new Spider-Man comic together, and they created a new villain to go along with it as well.

The comic opens in the middle of a battle in New York. We do not know what is happening but a worried MJ is walking towards the action looking for Peter. She find him in a pile of rubble, and with an injury that is more gruesome than one I have ever seen on Spider-Man. His right arm is mangled with the bone protruding from his wrist but just like the character we know and love he immediately starts with the jokes. Nothing will stop our Peter from making jokes when things aren’t going well. From the start it seems like JJ and his son successfully know how to write Spider-Man.

MJ urges Peter to leave but we are then introduced to the new villain created for this story, Cadaverous, a giant creature who looks robotic with some organic features running through him. He also has a horde of similar looking minions. We are already given a sense of urgency here based on how much damage Peter has taken. Peter and MJ get swarmed and while he is trying to hold off the grunts, Cadaverous runs MJ through with one of his sword-like claws. He then discards her body over the bridge but Peter is able to grab her before she hits the water and he swings away carrying her.

We are not shown the end of this battle as the next scene is MJ’s funeral. It’s a short scene but we are shown Peter is now missing an arm, and that he and MJ have a son. This is a drastic change from many of the tales of Spider-Man’s future, as usually we are shown his first born being his daughter May Parker. With these two changes you can tell this isn’t going to be your regular Spider-Man story. The last panel on the page shows us an emotionless Peter.

We are then given a 12 year time jump to introduce us to Peter’s now teenage son, Ben Parker. We quickly learn Ben has some fine Parker qualities like being responsible and defending those who can’t defend themselves. However, we are also shown his temper, as he throws a jock, that was bothering another student and insults him, through a classroom door. While meeting with the principal we find out this is not the first time this has happened with Ben giving someone what they “deserved.” This is one way we see that Ben and Peter differ; while Peter tended to stay out of people’s way in high school, Ben is putting himself in situations to look out for people.

Peter comes to pick Ben up from school and you can tell by the way Ben is drawn their relationship may not be so great. They soon get into a heated argument. Peter yells at Ben for being selfish and that helping people the way he did does not work out, while Ben yells at Peter for not knowing the first thing about helping people or about him. The argument ends with Ben telling Peter to go catch his flight and walking home.

The relationship between Peter and Ben is not one we usually see in future Spider-Man stories. If Peter is alive we usually see him as super dad spending time with his kids and being pretty involved in their lives when he is not out saving someone. Here though, you can tell that losing MJ the way he did greatly affected his whole personality, going as far as to tell Ben, “Trying to help…it only makes things worse.” As a huge Spider-Man fan, seeing Peter act this way is pretty disturbing albeit understandable after what he has been through.

When Ben gets home he is unable to let go of the front door, leading him accidentally rip it off the hinges. In a short exchange, Aunt May asks Ben what happened to the door and he can’t even explain what happened, something I am sure May has heard before from Peter and maybe even Ben. At detention Ben introduces himself to an outspoken sophomore named Faye Ito, who seems to subscribe to the same ideals of helping people that Ben does. It seems like a match made in heaven.

Elsewhere Cadaverous has another failed experiment on his hand and although we don’t know what he is doing, it will absolutely intersect with Ben’s life at some point. We are shown a tube with a woman in it that could be someone in Cadaverous life or possibly MJ, you cannot tell for certain. I would have liked to see more of Cadaverous instead of it just being teased but this being the first issue there is plenty more time to learn more about him.

The next scene is a phone call between Peter and Aunt May that hurts to experience. She tries to tell him about Ben being like him but Peter does not understand. He wants to distance himself from everyone saying they are better off without him. He truly does blame himself for what happened to his wife and not even Aunt May can talk sense into him. This is not a Peter I have seen before and would love to see more of what immediately followed MJ’s death instead of being given this self loathing Peter.

The story ends with Ben waking on the ceiling of his room (Spider powers confirmed) after having a nightmare about his mom. Aunt May comes in not noticing anything out of the ordinary and tells Ben that he needs to see something. She shows him to the attic and tells him to spend some time up there. While looking through some old boxes Ben stumbled onto….you guessed it: the Spider-Man costume.

The drastic change of what we are used to with Peter is pretty jarring, especially because in the first pages we are given a perfect Spider-Man. I really like Ben so far; we are shown how responsible he is making breakfast for Aunt May and replacing the door he broke instead of just leaving it. There is no way the Spider-Man suit he finds is not going to get used soon. After seeing him stand up to the bully, there is absolutely going to be someone else he has to stand up for, especially because as Into The Spider-Verse taught us, anyone can where the mask.

If you are a Spider-man fan this is definitely an interesting read and while I will be reading the next issues I don’t consider it a must read.

You can find Spider-Man #1 written by JJ and Harry Abrams in stores now.