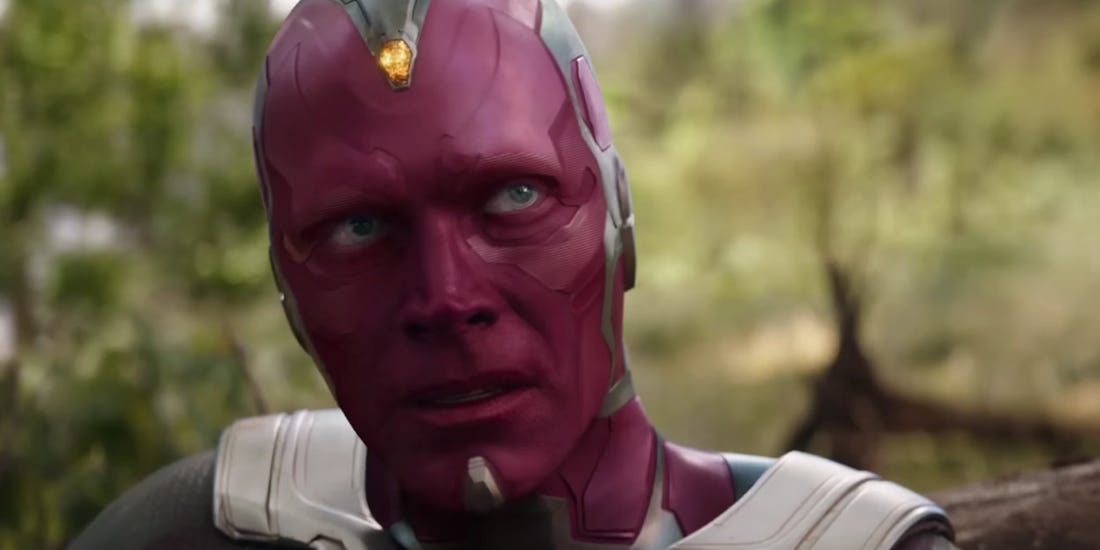 What if Coulson had become Vision after his “death” in “Avengers?”

You may have heard someone mention it or read a comment about it somewhere online.  You don’t know if it is true but it’s definitely plausible so you go on to tell someone, who goes on to tell someone else, and soon there is now a whole group of people who believe this might be happening.  This is how a rumor starts and in the world of comic book media they run rampant. These rumors can come from a tweet, quote taken out of context, or just an idea that someone came up with and shared around.  It doesn’t matter where it came from but you heard it and now you think it’s a possibility for the upcoming comic film that you have been waiting for. This affects fans of the genre all over the world and I do not necessarily think it is a bad thing.

Whenever I hear a new rumor I automatically start thinking about what it can mean for the story or how it will affect the characters.  Regardless of whether it is a rumor that fans view as something positive or negative, it achieves the goal of getting people to talk about the future films or episodes coming up.  Now, a lot of these rumors do not end up being true, but are entertaining, which is what gave me the idea for this series of “CBM’s Greatest Rumors – Could You Imagine if They Were True?”

The first rumor is one that always stuck with me regarding everyone’s favorite Agent of S.H.I.E.L.D Phil Coulson.  Coulson was first introduced at the end of Iron Man as an introduction to the “Strategic Homeland Intervention, Enforcement and Logistics Division” or “S.H.I.E.L.D.”  He became a face that would be synonymous with S.H.I.E.L.D. as the MCU expanded. We saw Coulson meet his untimely demise at the hands Loki in Avengers, only to learn soon after that he survived, thanks to the intervention of Nick Fury and some Kree DNA.  This gave him a second chance at life while leading a new team on Agents of S.H.I.E.L.D.

Yet back in the day, when Avengers first hit theaters, there were a number of rumors flying around about Coulson’s death, and one in particular always stuck with me.  This rumor was that Coulson was in fact going to be brought back, but in this world he would have returned as Vision.

Now we could have been led to believe Coulson had died back in Avengers, similar to how it actually happened, but what if in Captain America: Winter Soldier, one of the secrets from S.H.I.E.L.D that was released related to Coulson being alive?  In a mid-credit scene, we would have been shown Captain America going through the files to find one marked Tahiti and the audience would be shown a video feed of Coulson in a coma.

It’s possible that Age of Ultron could have been very similar to the movie we got as well, but instead of finding Jarvis partially broken rebuilding himself.  Tony and Bruce would have found him half complete and realize that the only way to fix Jarvis would have been to bond his AI with the connections of a human brain.  They would then merge Jarvis with Coulson, who we would learn would not be waking up, and place them into the body that was created for Vision, giving us Coulson Vision.  Now this would drastically change every character’s interaction with Vision.

When he first arrives, instead of looking at him as a possible villain, he would have been welcomed back in the fight against Ultron. It would have also given the character of Vision a different set of problems that we see Jarvis Vision have. Now that he is part machine, we could see him being challenged with trying to deal with feelings that were once so easy now feeling alien to him.  This also could have affected the casting for Scarlet Witch. Marvel may have decided to go with a more mature looking actress so the age gap wouldn’t seem as large, though who is to say age matters between an android and an enhanced human?

As someone who followed Captain America so closely, it would have been amazing to see Vision disagree with Cap over the Sokovia Accords in “Captain America: Civil War.”  A heart to heart conversation between Captain America and Coulson, with them discussing how dangerous Coulson has become and him admitting he understands why he would need to be regulated would have added so much to that movie.  Then once he injures War Machine, there could be a scene where he discusses understanding he should feel angry, sad, and worried, but he is unable to process those emotions. He would later discover that the only time he feels anything is when he interacts with Wanda and their relationship would build off of that instead of both of them being feared.

In the penultimate film of the Infinity Saga, Avengers: Infinity War, Vision would feel very different about what was happening compared to the film we were given.  He would not want to face death because he has already come so close, but he knows that the stone in his head must be destroyed. He would struggle with sacrificing himself while finally starting to feel slightly human again.  Seeing the battle happening outside in Wakanda would urge him to go help his friends instead of completing the brain mapping that could keep him alive in some form. Vision flies out to the battle to protect his friends along with Thor, turning the tides of the battle until Thanos actually shows up.  He slowly walks towards Coulson and everyone knows what is coming. We must watch him die again and this time we are not sure how he will come back, if at all.

As I said it was just a rumor… but could you imagine?