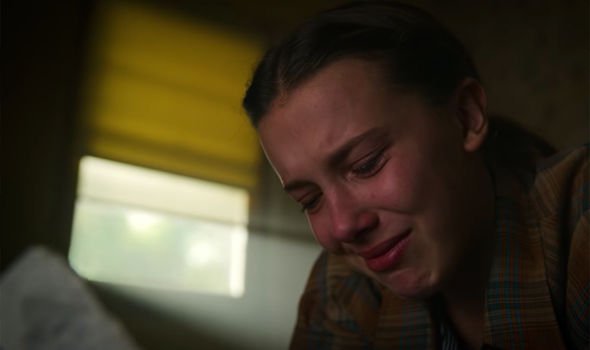 November 6 marks this year’s Stranger Things Day. Fans all over the world are celebrating the groundbreaking Netflix show. The Cultured Nerd wants in on the festivities, so here are the greatest moments of Stranger Things so far. Warning: There are, of course, spoilers for all three seasons!

When Will Byers goes missing, his mother Joyce, as well as friends Mike, Lucas, and Dustin know he is out there and are intent on bringing him home safely. When his “body” is found in a quarry, there is reasonable doubt from characters in the show and the audience that he is really gone; of course it is later revealed that the body was a decoy. Still, at the time, this was truly a sad moment in the show’s early days, as a corpse is pulled out of the water and an eerie rendition of David Bowie’s “Heroes” plays over the somber scene.

Nancy Wheeler’s character arc in season 1 follows her on a journey of discovering who she wants to be versus what is expected of her. When she sleeps with Steve Harrington, it’s clear she’s scared to do it, but feels pressured into thinking she should. To add insult to injury, she leaves her best friend Barb outside, which leads to the girl being taken (and killed) by the Demogorgon. It adds guilt on top of Nancy’s uncertainty in herself, a guilt that carries on to season 2.

Eleven defeats the Demogorgon (“The Upside Down”)

Eleven, or El, is one of the biggest mysteries in season 1, but she quickly grew on all of us with her few lines of dialogue and fondness for Eggos, and as the season progresses, a young love develops between her and Mike Wheeler. Just after Mike musters the courage to kiss her, Eleven makes a sacrifice to banish the Demogorgon once and for all, disintegrating it and uttering the final words, “Good bye Mike.” It is a devastating moment, as both kids cry and El gets stranded in the Upside Down, leading to nearly a full year of separation for the two lovebirds.

After the events of season 1, El is taken in by Chief Hopper. She is told to stay in Hopper’s cabin, so that she isn’t taken back in for research by the government. It becomes quickly apparent that El, like most kids, is restless and can’t stay inside forever, so she leaves the cabin one day when Hopper fails to come home on time. She tries to see Mike, only to find him talking to another girl, Max.

When she returns, Hopper is angry with her for being reckless, and the two argue, as Hopper calls her a brat and El says she hates him, comparing him to Brenner, who experimented on her. The argument is tense because we can see both sides: Hopper is being safe and responsible but at the same time, El is a miserable kid who feels locked up.

Bob Newbie is killed by the Demodogs (“The Mind Flayer”)

Bob is one of the characters added in season 2 who won fans over instantly, with his kind attitude and patience with girlfriend Joyce Byers and her kids. He spends majority of the season in the dark about the stranger goings-on in Hawkins, but when duty calls, Bob is willing to venture through Hawkins Lab to get the power back on in the building, so everyone can escape.

He succeeds and gets the breakers on, and is just about to join the others when he sees Joyce and smiles at her in genuine happiness. Then, a group of Demodogs ambushes him and ultimately kills him in front of his girlfriend. It’s a tragic moment for the show, and in season 3, it’s clear the Byers haven’t forgotten his selfless act.

After the roller coaster of events in season 2, the Party finally gets a bit of a happy ending. Lucas gets to dance with newcomer Max, who will later be his girlfriend. Dustin asks several girls to dance with him, but when they reject him, he gets to dance with Nancy. A girl even asks Will to dance, when he had been ostracized throughout most of the season. Perhaps the best part of the Snow Ball, though, is seeing Mike and Eleven dance together. Finally, Mike gets his dance that he asked for in the season 1 finale, and everyone seems happy for the time being.

Will Destroys Castle Byers (“The Case of the Missing Lifeguard”)

Throughout the first two seasons of the show, Will doesn’t get a break. After he is saved from the Upside Down and gets possessed by the Mind Flayer, he isn’t ever really the same. Will loses a lot of his childhood, and he still wants to do fun things like Dungeons & Dragons with the Party. However, when Mike and Lucas can’t focus on the game and instead are preoccupied on Mike winning El back, Will snaps.

He leaves them be and goes to his childhood fort, Castle Byers. Will sobs as he looks on at all his fond memories with his friends, like the Halloween they spent dressed as Ghostbusters. Then, Will takes a bat and demolishes the fort in the rain. Will never got to have a great childhood before having to grow up, and this scene captures the moment that he sadly realizes this.

Robin comes out to Steve (“The Bite”)

Throughout season 3, Steve tries time and time again to get a date working at Scoops Ahoy! Ice Cream Parlor, while coworker Robin, who later confesses to have been obsessed with him in high school, watches in amusement. After prodding from Dustin and lots of teases, Steve and Robin get a quiet moment, and Robin asks if Steve ever fell in love with anyone. He says Nancy Wheeler, but that he’s found someone else. Steve then goes on to confess that he actually likes Robin.

There is an awkward silence, as Robin struggles to find words to say, until she finally tells him the truth of why she was obsessed with him. It wasn’t because she liked him, but because she was jealous that he stole the attention of Tammy Thompson, a girl Robin liked, and how the whole situation frustrated her for a long time before she knew Steve well. The scene is a nice break from the action and delivered a heartfelt performance from both actors, showing a boy and girl can just be friends platonically.

Alexei, a Russian scientist who Hopper, Joyce, and Murray bring along with them for info, became a standout fan favorite in season 3, with his childlike fascination with Looney Tunes and stubborn preference for cherry Slurpees. When Murray takes Alexei to the fair to live the “American life,” Alexei is ecstatic, especially when he wins a Woody Woodpecker stuffed animal from a carnival game. It’s a heartwarming sight, as he smiles like an excited little kid. That is, until a Russian spy calls him a traitor and shoots him dead. The scene is a quick tone shift for viewers, and it is truly tragic.

Billy Sacrifices Himself (“The Battle of Starcourt”)

Billy Hargrove just might be one of the most tragic characters on Stranger Things so far. We learn that Billy and his stepsister Max are victims of an abusive household in season 2 and that this environment has made him cruel, but season 3 shines more of a light on Billy as a character. As he is used as a host body for the Mind Flayer, we learn from Eleven’s mind powers that he was once just another happy boy, who loved surfing in California before falling victim to domestic abuse.

For most of season 3, the Mind Flayer possessed Billy and used him for dirty work, whether that be gathering more human bodies, or fending off the Party. When he and the Mind Flayer trap El and the others in Starcourt, Billy comes close to killing her. However, when El reminds him of a memory she saw, of Billy and his mother at the beach, he snaps out of it, with a lot of effort. He then leaves El and defends her as the Mind Flayer tries to kill her, getting himself killed in the process. It’s a truly heroic moment for Billy, and a very good, albeit heartbreaking, payoff to his redemption arc.

Hopper’s Speech (“The Battle of Starcourt”)

Season 3’s finale may have ended on the most heartbreaking scene of Stranger Things yet. Two big focuses for the third season are Hopper’s relationship with Eleven and the Party growing up, and the ending scene ties up both themes in a gut-wrenching package, as Eleven reads a speech her adoptive father had written up to talk to her and Mike about boundaries. With Hopper “dead” from the explosion of the Russians’ gate to the Upside Down, Joyce gives the speech to El to read.

In it, Hopper talks about how El helped him to have feelings again, after he lost his daughter Sarah to cancer. He felt that, with Mike, she was growing up, and it scared him because he felt like he was losing her, and that he couldn’t stop these changes if he wanted to. The speech, narrated by Hopper, is dubbed over scenes of the Byers saying goodbye to everyone and leaving Hawkins, and it is a perfect, tear-jerking conclusion to the season.

Thankfully, Stranger Things 4 is coming within the next year or two, release date unknown. Until then, we have three amazing seasons to enjoy, with these scenes and more. Happy Stranger Things Day!