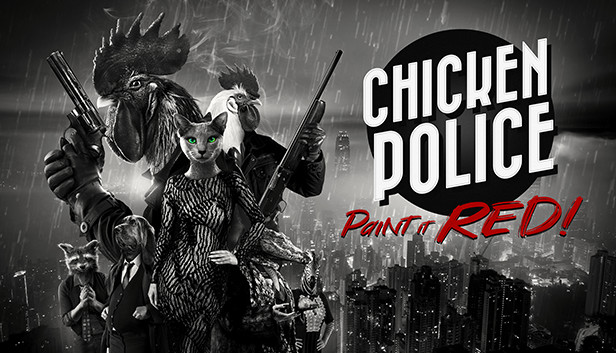 What do you get when you cross Sin City with anthropomorphic animals? A clucking good time.

Everything about Chicken Police: Paint it Red! is a love letter to classic noir, from the black & white cityscape, lit with neon signs, dingy bars filled with cigarette smoke, and a burnt-out cop ready to make a comeback. Except there’s one twist: that cop has the head of a rooster, and he’s flown the coop.

In this point-and-click detective game developed by The Wild Gentlemen, you assume the role of Santino “Sonny” Featherland: a former hero of the police force turned alcoholic whose counting down the days till retirement. On one stormy new years night, he finds an antelope in a pretty dress waiting in his office, asking for help. Right off the bat, the animal-mashup puts a tongue into the cheek of our protagonist’s first observation: “She had a bygone look in her eyes, older than this ancient building and perhaps the whole city itself. Or maybe I’m just drunk.”

The humor mainly comes from the fact that the game takes itself so seriously despite the puns and memes found in each situation. After accepting the case, Sonny teams up with his old partner, Mart McChicken, and they encounter a whole batch of short-tempered species along the way, each with their own ironic circumstances and fowl play.

While there are a few mini-games, such as practicing your aim at the shooting range or tracing a rope to untie the knots in a desperate escape, they are often speedbumps in pacing between looking for clues and questioning suspects for information. There are plenty of secrets to find in each environment, which change depending on the time of day.

The sharply written dialogue and on-point voice acting from an impressively large cast sell each interaction and are undoubtedly the game’s highlight. While there are a few clichés, it isn’t all played for jokes. The novelty of a crocodile madame or a busking fly, for example, manage to touch on deeper themes like racism, class, and politics as the story unfolds.

The story is broken up into several chapters with multiple locations you can travel to, including side-missions and main story points. When it’s time for interrogation, players must use what they’ve learned to ask pointed questions to make their suspects spill the beans. Poorly-chosen questions can close off dialogue options and limit how much of the story’s background you’ll learn, but it won’t make the case unsolvable.

As for the style, most of the game is monochrome, but colors pop up for emphasis, such as the threatening red letters spray-painted at a crime scene. Much of the art is a combination of real photographs, hand-drawn images, and passable photoshop. It’s a basic, two-dimensional setting but the instantly iconic 1940’s themed soundtrack ultimately engrosses you in its world.

The PlayStation 5 version of the game, which I tested, supports some unexpectedly impressive DualSense support in the form of gentle haptic feedback from the pouring rain, or the sound of passing cars coming through the controllers speakers. These little environmental touches we’re appreciated and add to the games atmosphere.

If you’re in the mood for something different, I would strongly recommend Chicken Police. For only $20, it’s worth every penny. You’ll get plenty of laughs with some exciting twists along the way and puzzles that require a bit of genuine detective work to solve. All in all, it’s a bright red feather in the cap of point-and-click adventure games.

Disclaimer: I was given a copy of Chicken Police in exchange for a fair and honest review. I played the PlayStation 5 version for testing.