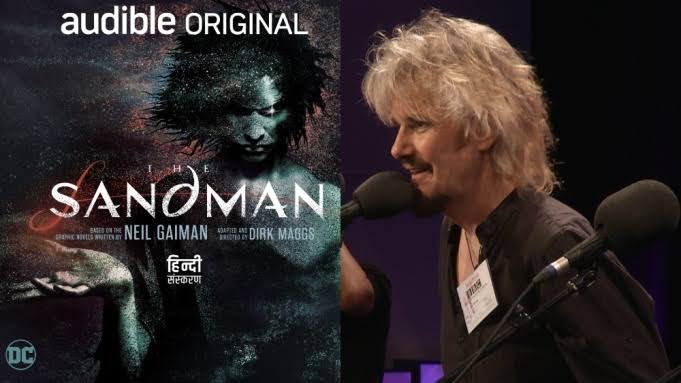 The Lord of Dreams is now coming to India!

Amazon’s audiobooks platform Audible has announced that Neil Gaiman’s best selling graphic novel “The Sandman: Act I” will be adapted to the India’s Hindi language with some of the biggest and up and coming names in Bollywood casted for various roles in the adaptation.

Audiobook pioneer Dirk Maggs will also be a part of this new adaptation as he had been for the English versions of the graphic novel for Acts I and II. Maggs has had a distinguished career in the realm of radios where he has elevated radio drama to the level which he describes as a “film in your ears”.

Dirk Maggs spoke to Variety giving his thoughts on the new project and how overly excited he was about the cast involved.

“I was absolutely, if you pardon the expression, gobsmacked when I saw who is going to be performing, because this is a cast of A-listers. This is exactly how we’ve tried to cast it for the English-language version, which is to get the very best cast we can, and it’s not because it’s a gimmick to get A-list actors to perform this stuff. Its by Neil Gaiman and it needs people of this caliber to make it work. And when you get a cast this good there is no better performance available in those roles. I’ve got to say, I just love Tabu as the narrator – it’s wonderful to have a female voice performing what is Neil’s part in our English-language version , then you’ve got Manoj who’s just amazing as Doctor Dee – it’s exactly what it needs to be which is a scenery chewing performance, but still absolutely classy. In Vijay, who’s the young and upcoming talent who’s playing Morpheus — very much like James McAvoy who plays Morpheus in the English-language version — you’ve got someone who’s got real energy and vitality in the part. The whole cast is just to die for really, or to dream about.”

In the audio adaptation, The Sandman, also known as Lord Morpheus, the immortal king of dreams, stories and the imagination, is pulled from his realm and imprisoned on Earth by a nefarious cult and languishes for decades before finally escaping. Once free, he must retrieve the three tools that will restore his power and help him to rebuild his dominion.

The world of “The Sandman” will debut it’s adaptation in a land which is bestowed with its own historic mythological stories such as the Mahabharata and the Ramayana and this Hindi language adaptation should nicely open up this new and refreshing world beyond India’s English language market.

Maggs also spoke about how Neil Gaiman is aware of the Indian Mythologies and their storytelling and legend and how he’s so good at weaving these different mythologies into one cohesive story capturing the imagination of the world over.

“What’s interesting about ‘The Sandman’ is, it’s drawing on all sorts of mythologies, and it does touch on South Asia and North Asia, and it also goes into Greek mythology and Norse mythology, and Neil is a kind of magpie who steals the shiniest objects from various mythologies and blends them together, forges them into something entirely new.”