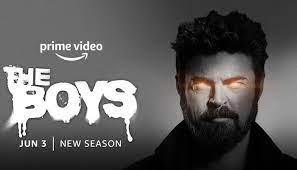 Things are about to get a whole lot more … diabolical as Prime Video has officially released a first look at Season 3 of The Boys. Check out some familiar faces, as well as some new ones, that are set to cause a bloody havoc for our favorite anti-supe team.

Amongst all the “trailer hype” for this year, one can argue that none has been bigger than that for the upcoming season of Amazon Prime‘s hit series, The Boys. For the better part of the new year, fans have been clamoring for a trailer that highlights the follow up to a rather shocking ending to Season 2 of the series and after a lengthy wait (and some teasing from the cast themselves), the trailer has officially been released. You can check out the red band trailer full of blood, guts, and dancing down below.

Warning! Major spoilers for Season 2 of The Boys ahead.

While the trailer doesn’t offer much in terms of plot details, the trailer does show off looks at the main cast and where they are given the explosive (quite literally) concluding episodes for the series’ sophomore season. As you may or may not know, Season 2 of The Boys saw the tragic death of Butcher’s long-lost wife and the eventual disbanding of the team as we have come to grow and love. However, given the trailer’s first look at Season 3, it seems that team is back together in a likely attempt to bring down Anthony Starr’s increasingly unstable Homelander. One of the biggest surprises, and something that was heavily alluded to in the first poster that was released for the upcoming series, is that Karl Urban’s Butcher will indeed be taking Compound V in The Boys third season to seemingly level the playing in his personal vendetta against Homelander. This falls in line with a story from the comics that sees the titular group take Compound V so they are better equipped to take down the “heroes” they are targeting. The trailer’s other major reveal is the first real glimpse at Jensen Ackles as Soldier Boy, a World War II veteran who is Vought’s first “supe” and essentially a twisted, mentally unhinged version of Captain America.

Additionally, the trailer features the return of Homelander’s son Ryan, Black Noir back in action (and confirmed by the showrunner to be unmasked for the first time), Jack Quaid’s Hughie, a spoof of Kendall Jenner‘s infamous Pepsi advertisement seemingly featuring A-Train, The Deep in action, Starlight seemingly being the new leader of The Seven, and much more. With The Boys slated to debut this June, the mayhem surely can’t come soon enough for fans. In the meantime, you can check out all eight animated episodes of The Boys: Diabolical on Prime Video, which features a finale that showrunner Eric Kripke has confirmed is canon and vital to Season 3 of The Boys.

Season 3 of The Boys will debut the first three episodes on June 3 with new episodes in the eight-episode season will be available every Friday.

What did you think of the trailer for Season 3 of The Boys? Do you think the team will take Compound V to finally level the playing field in their war against Vought and The Seven? As always sound off in the comment section down below and don’t forget to tune in right here at The Cultured Nerd for the latest news surrounding Season 3 of The Boys on Prime Video.