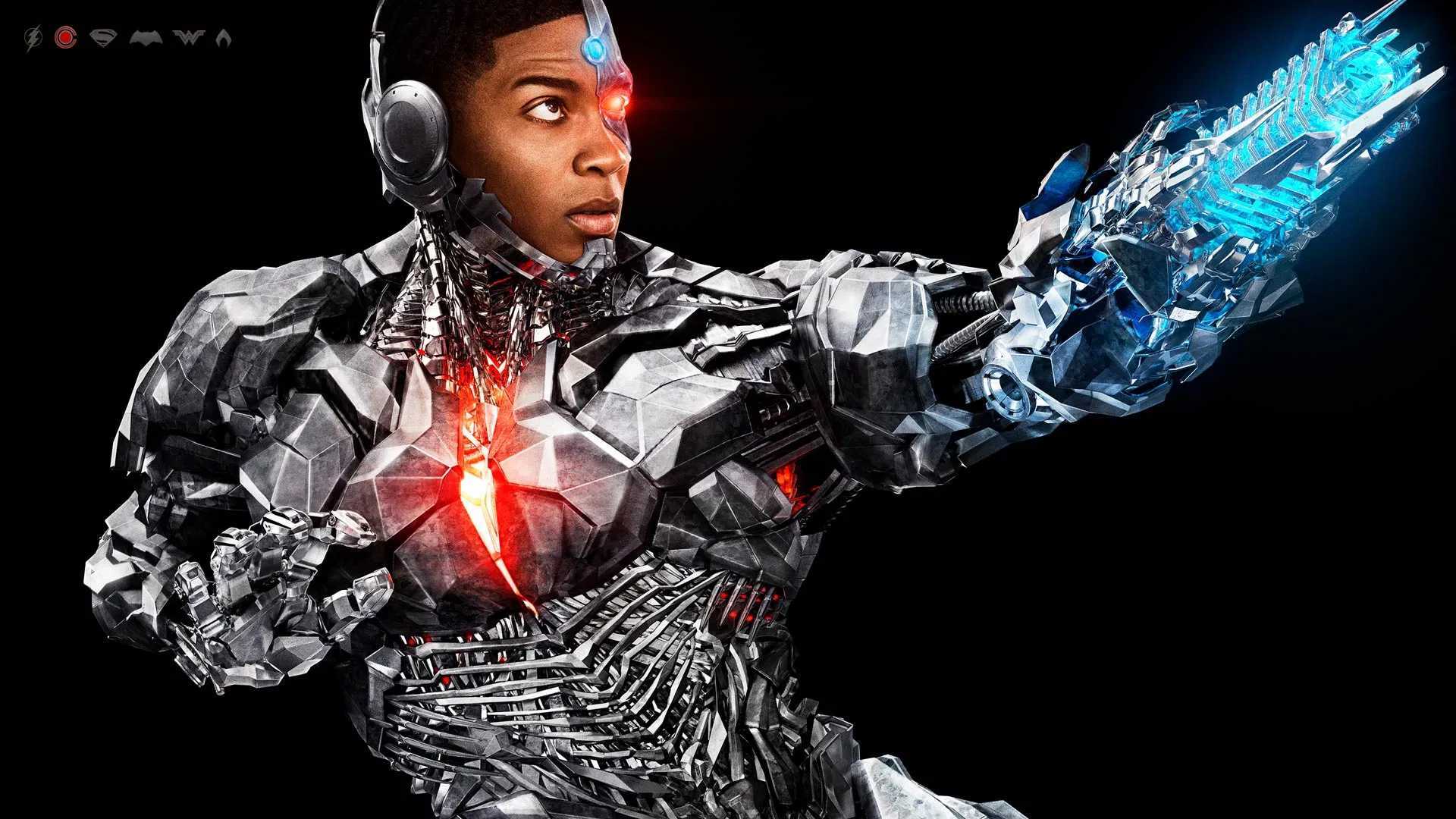 “Today is a day for truth,” so the saying goes, from Holly Hunter’s Senator Finch in Batman v Superman: Dawn of Justice—and it’s truly prophetic, as this Thursday, March 18th, the world finally knows the breadth and scope of Zack Snyder’s true vision for his Justice League saga. The film was released in 2017–or, rather, a hack-job, chopped-to-oblivion version that neutered the characters and rendered the film an emotionless joke machine, devoid of any personality and so generic it felt like it came off a factory conveyor belt. The accurately dubbed Josstice League, filmmaker Joss Whedon’s cut of Zack Snyder’s work, made many unforgivable changes to what Snyder created, but arguably the greatest atrocity is the removal of one of the most pivotal arcs in the film, the arc of Victor Stone AKA Cyborg, played by Ray Fisher.

It is impossible not to notice, when one watches Whedon’s cut of Justice League, the absence of characters of color. That removal is felt most sharply with Cyborg, a character who has barely any personality in the Whedon cut, yet has been christened “the heart of the film” by many fans and Snyder himself in Snyder’s cut. The differences are subtle in some ways, overwhelming in others. The basic story is the same: tortured over the death of his mother and unable to accept his new identity, Cyborg views himself a monster and his work with the League is his first step towards self-actualization. But the depth of the story is completely stripped away in favor of a throwaway “Boo-yah”, the character’s catch-phrase from the Teen Titans animated series, and a redesign that doesn’t fit at all with Snyder’s aesthetic.

In Snyder’s version of Justice League, Cyborg is depicted as world weary, broken, and self-hating—the way Batman is depicted in Batman v. Superman. He starts off the movie, in the first shot we see of him, with his back turned, away from the audience, not wanting to show his face. In Part 3 of Snyder’s four-hour long, operatic work, titled “Beloved Mother, Beloved Son”, we understand the trauma that imbued Cyborg’s creation. Starting out as a star football player and student, Victor Stone’s morality shines through in his decision to hack the school’s computer system to help a failing student, who’s suffered a death in the family, bring up her grade; and a strong support system in his Black mother, who cheers him on at one, and every, of his football games. As in many Black families, Victor’s father Silas, played expertly by Joe Morton, is absent. However, the difference here: rather than simply not wanting a part in his son’s life, Silas is a scientist working for STAR Labs and can’t make it to Victor’s games because he’s busy fiddling with the tech that eventually helps to create Cyborg.

Victor and his mother are in a vicious car accident, and only one survives—barely, because Silas Stone uses the foreign, alien technology in the Mother Box to bring his son back to life. However, his human body is gone, and now he is riddled with alien, robotic technology, including the ability to hack any interface, disable any security system. Simply put, in the age of the digital, he is a god, perhaps more than any of the other Justice League members. In a recent interview, Ray Fisher dubbed the character to be “rivaled by only Doctor Manhattan” in terms of power. Aside from the chill-inducing fact that the two most powerful characters in the DC Universe are Black men (if, of course, the Doctor Manhattan Ray is referencing is Yahya Abdul-Mateen’s version from the recent HBO series, which he very well could be because of the introduction of the Multiverse), this makes, in many ways, Cyborg more powerful than Wonder Woman, than Aquaman, than even Superman.

And yet Cyborg cannot get past his survivor’s guilt, at the fact that he walked away from what killed his mother; and his self-loathing at what he is, at what he has become—essentially, a disabled man given life again. This is particularly important representation for the disabled community, who has few superheroes to call their own. Cyborg, rendered essentially paraplegic due to the loss of the lower half of his body, is given life again by technology, in what only dawned on me after the film had finished, that is chillingly referred to as “Mother”. His mother’s sacrifice is what unlocks his new abilities. Thus, Cyborg is not able to see the awe in what he can do without hating it—hating his father for saving him. Burdened with guilt, he spends much of the movie in shadow, rejecting the Justice League. “Fuck the world,” he snaps harshly at Diana Prince when she comes to recruit him. “What has it ever done for me?”

That sentiment alone is something that will resonate with many Black viewers, especially in light of the recent racial justice movements and the COVID-19 pandemic, which has disproportionately affected communities of color. And yet Cyborg’s story, powerfully enough, has naught to do with racism—not a single aspect of Cyborg’s origin is about the color of his skin. A perfect example of this is a single shot, shown in several trailers, which speaks volumes: a maligned Cyborg as Victor Stone, raising his hands to dispel an armada of deadly weapons at his disposal. The image of the Black man, hands raised, peaceful, has been the calling card for the Black Lives Matter movement. Yet here Cyborg is in control of all the power, and rather than use it, he sends the missiles away.

Martian Manhunter, another Black man in the film, simply exists, and is powerful, and present. To have these two Black men be, without the burden of their Black identities weighing down their superhero identities, is a bold statement from Zack Snyder in and of itself. I was a big fan of Marvel Studios’ Black Panther, and even HBO’s Watchmen—both of which have been praised for their representation of Black superheroes. However, both stories deal intensely with racism and proximity to white supremacy. In the Snyder Cut, Black superheroes simply exist, and that affected me more profoundly than I can put into words.

That father-son dynamic I mentioned earlier is also very important, as Silas Stone’s sacrifice—to save his son—is what closes the second act of the film. The mere notion of, in a major superhero blockbuster, a Black father sacrificing his own life to save his son’s, is a statement that speaks volumes. Black fathers are often not portrayed as having any stake in their children’s lives, especially not their sons. But the tender look Silas gives Victor when he sees his son leading the team into STAR Labs shows the pride he has, and a Black father being proud of his son is a revolutionary image in today’s Hollywood.

Some fans have maligned Snyder for removing the comedic element of Cyborg, an element that was largely introduced and carried on in the Teen Titans animated series. These fans are unaware that Cyborg has a vast history in the comics as a character weighted by gravitas and seriousness. Hollywood has long been criticized by communities of color for doling out emotional heft to its white leads, and rendering its Black characters sidekicks who are solely there to trade quips and witty lines with their more developed white counterparts. The Marvel Cinematic Universe is guilty of this; Iron Man, Captain America and Ant-Man each have a “funny Black sidekick”, who has no real personality and is solely there for comedic effect. I love the Teen Titans show, but Cyborg in it was largely this: joke after joke after joke, with no personality.

However, what is so powerful about Snyder’s version of the character is that he is the emotional core of the team, and of the film. No other character’s story is as ridden with weight, seriousness and emotion as Cyborg’s. Sure, Flash has some touching moments with his father, but largely, the character who is taken the most seriously, who has the most gravitas, is a Black disabled man who feels ostracized from the world. That, for me, is infinitely more powerful than Cyborg simply serving as a joke machine to make the rest of the team laugh.

In the third act of the film, he is prepared to sacrifice himself to destroy the unity, the combination of the three Mother Boxes owned by the world of man. Barry Allen’s lightning force is needed to shock it away, but in a moment of desperation Barry is taken out of the fighting, and Cyborg is rendered useless by the power of the Mother Box. We see a vision of him with his family: content, whole and “normal” again. The vision tells him: “Our broken boy. You don’t have to be alone anymore…”

For a moment, Cyborg hesitates. But then he stands strong and says firmly, “I am not broken. And I’m not alone.”

No, Cyborg, you’re not. The Justice League is with you. And so are we.