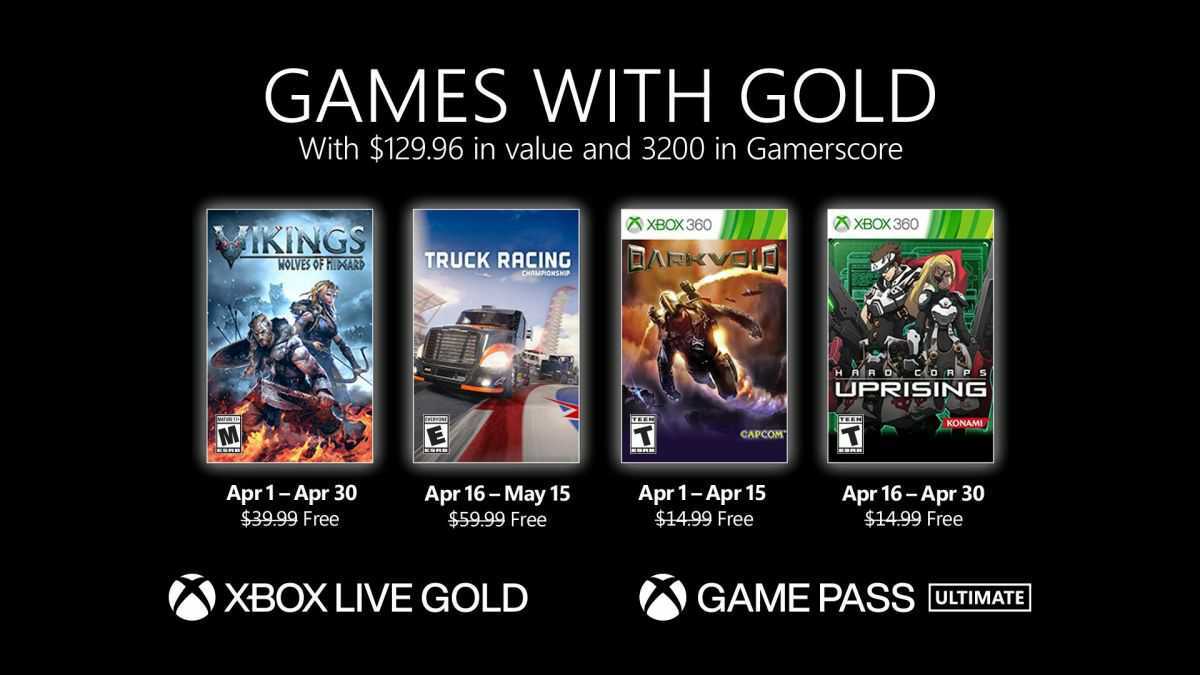 Today, the lineup for the April Games With Gold was announced. Xbox Gamers with Xbox Live Gold or Game Pass Ultimate can expect to find Vikings: Wolves of Midgard, Truck Racing Championship, Dark Void, and Hard Corps: Uprising will be available during the month of April.

“Fear the wolves. They are cold, they are hungry – and they will stop at nothing to survive… Ragnarok. Legend has it that when the coldest winter descends, the Jotan will return to take their vengeance against the Gods of Asgard. The world is on the road to perdition and the fate of Midgard hangs in the balance. But when the Fire and Frost Giants begin to merge their armies, they encounter the clan of the Ulfung – the Wolves of Midgard. Bloody, but unbowed following the destruction of their village, this notorious band of ostracized Viking warriors are determined to seize their destiny and save the world. As clan chief, you must save Midgard from complete annihilation, and spearhead the charge to vanquish the fiendish creatures of the Fimbulwinter. The Action RPG Vikings – Wolves of Midgard takes you to the Shores of Midgard, a world based upon the mythology and history of the Vikings, but with a fantasy twist. Battle the fearsome Jotan, hordes of terrifying undead monstrosities and the beasts of Ragnarok, as you strive to survive the growing cold that threatens to end all life, forever. Master mighty weapons, including sword and shield, two-handed hammers, dual-wielded axes and swift bows. Earn blood in battle to offer in tribute to the Gods in order to acquire and enhance devastating Spell Powers and other special unlockables.”

“The European Truck Racing Championship is one of the most spectacular and challenging motor racing competitions. The driving difficulty and many unique race features have been faithfully reproduced with the KT Engine (WRC). In ETRC, like on real-life race tracks, you need to control the temperature of your brakes so they don’t overheat. You must also consider the weight of the truck when cornering, monitor tyre wear and find the best tactics for overtaking.”

“Download the manual for this game by locating the game on http://marketplace.xbox.com and selecting “See Game Manual”. Step into ‘the Void’…. A sinister parallel world of hostile aliens, powerful weapons and deep mystery…. Dark Void’s unique combination of jet-pack powered dog-fighting and ground-based combat brings a thrilling new dynamic to video-gaming. Experience the seamless transition between flight and fight in this epic adventure from Capcom®.”

“(Online Interactions Not Rated by the ESRB) Thrilling retro run-and-gun action is back with a vengeance in Hard Corps: Uprising, a new 2D side-scroller developed by ARC System Works that pays homage to classic Konami action series. Play as the soldier Bahamut as he begins to write his legend. Battle in the grueling trenches of Arcade mode, where only the best-of-the-best can survive to the end, or the all-new Rising mode, where a life bar and point system allow you to purchase items and upgrades to build your soldier up and achieve ultimate victory. Need help? Partner with a friend to lay down some serious carnage.”