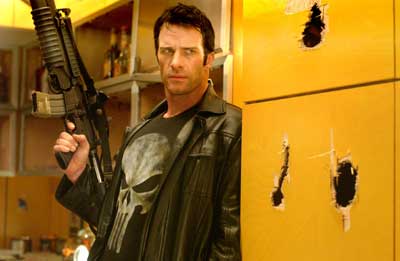 Thomas Jane is an actor, best known by comic book fans for his portrayal of The Punisher in the 2004 film of the same name. While the film was not a success or well regarded by critics and fans, Jane’s performance was memorable and revered. Jane played Punisher in the video game adaptation of the movie as well. He even went on to reprise his role in the fan film titled Dirty Laundry.

As of now, Thomas Jane is set to make his directorial debut in the fifth season of the TV show The Expanse.

In an interview with ComicBook.com, Thomas Jane spoke on if he’d be willing to reprise his role as the character and/or directing Jon Bernthal in a Punisher project.


“That would be a fan thing,” Jane says of reprising the role. “If the fans really wanted me back, and we could find a script. See, I think the Punisher, and the reason why I did the short, was that it hasn’t fully been cracked in a way that fully honors the character, Frank Castle, in a film. And I love what Bernthal did on Netflix. I think he’s such a great Punisher. In fact, I would love to direct a Punisher starring Bernthal, because he’s such a great actor.”

Jane further elaborated on the idea,

“Now, if the fans wanted me to come back and play Frank, and the script was something, and when we found a director and a script where we really felt that we could put a stamp on this character, there is so much to that Frank Castle and the Punisher, and his world,” he continues. “We couldn’t make a dark film when we did Punisher in 2004. We couldn’t go as dark because people just hadn’t trusted, on the production side, that fans would be into that. But, now we’ve got shows like The Boys and, of course, The Dark Knight came out after The Punisher, where I think that producers and studios are now aware that there’s a real audience for the darkness, the Taxi Driver-esque quality that you could pull out of a Frank Castle, and that hasn’t been done. And I would love to do that. But again, we have to take it to a place where, frankly, The Punisher has always wanted to go.”

Thomas Jane is soon to make his directorial debut in The Expanse. The fifth season will premiere on December 16th, on Amazon Prime Video.