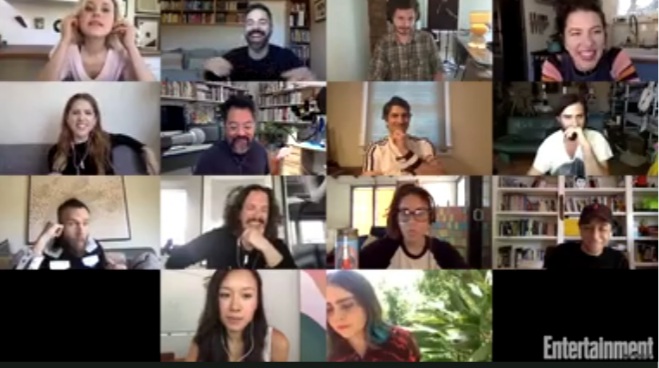 A majority of the cast, and the director, writer, and even the creator of the original comic movie gathered for the “Scott Pilgrim Vs. The World Water Crisis” table read.

The star-studded table read was headed up by director/co-writer of the instant classic, Edgar Wright, along with his co-writer, Michael Bacall. Michael Cera, Mary Elizabeth Winstead, Chris Evans, Anna Kendrick, Alison Pill, Aubrey Plaza, Brandon Routh, Mark Webber, Mae Whitman, Ellen Wong, Satya Bhabha, and Jason Schwartzman (wearing a shirt with a giant picture of his face), lent their vocal talents to a table read of the whole {BLEEPING} movie for a cause that is too important not overlook.

The table read took place, thanks to Entertainment Weekly, to bring attention to a growing crisis worldwide. Many people around the globe do not have access to clean water, and Water for People are trying to change that. Water for People is a nonprofit international organization that looks to help shrink the astronomical 840,000+ deaths a year from diseases contracted from contaminated water.

“Water For People is an international nonprofit based in Denver, Colorado. Our goal is to bring water, sanitation, and hygiene services to everyone, and to make sure those solutions last forever.”

What set this table read apart was the original creator of the comics, Bryan Lee O’Malley, joined in on the fun and drew pictures during the session that will be given at random to some lucky fans, along with a drawing from Cera. In order to enter, join Club 6 by becoming a monthly donor for just $6 with the link below.

The fact that the table read was prerecorded was curious, but once the cast got rolling, it was clear why. During the edit, they added many of the comic book style effects that made the film an instant fan favorite. As previously mentioned, there were some who could not make it so, the likes of Kendrick, Whitman, Webber, Scwartzman, and Bhabha stepped in to flawlessly accept (such as when Kendrick made sure Cera knew she was no longer his sister and now his ex).

Even without the entire cast, the production went of beautifully. It had a few drawn cartoons of the battle scenes and evil ex flashback added seamlessly to deliver an experience almost as good as the movie–especially when Plaza censored herself with a makeshift black censor bar she held up, to hysterical laughter from her crew mates.

At the time of the writing of this article, “Scott Pilgrim vs. The World Water Crisis” has with just under 400 donors (myself included) raised over $16,500. With the state of the world with the global pandemic, it is easy to forget there are people less fortunate than us. Donate now for this worthy cause and enter for a chance to win one of the remarkable drawings from creator O’Malley.

To enter for a chance to win become a member of Club 6 and to watch the amazing table read click here.