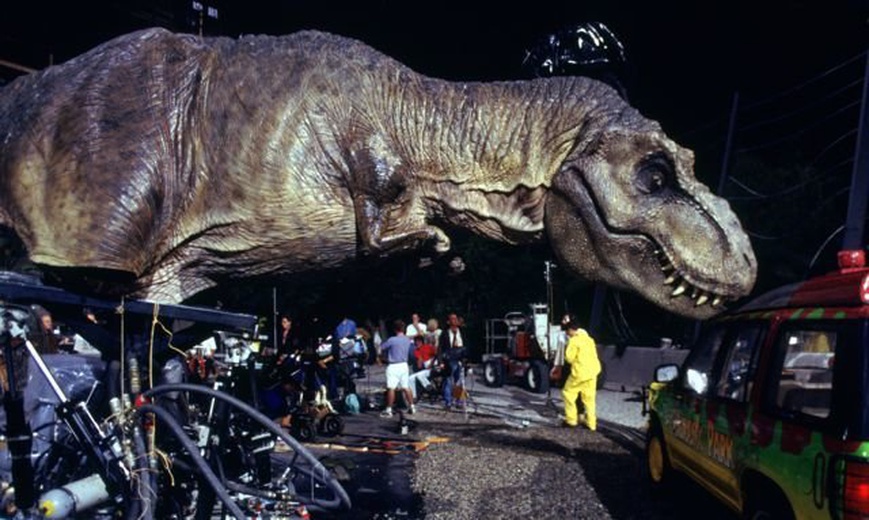 We all remember the awe of seeing the computer-generated Brontosaurus striding across the screen for the first time, reflected in the dropped jaws of Drs. Grant and Sattler. Computer animation is one of the pillars of the Jurassic Park franchise; its groundbreaking technology rippled through Hollywood much like the stomp of the T. Rex.

But this terrific world is dual-natured, the other of which director Colin Trevorrow promises will return in force for Jurassic World: Dominion–practical effects.

In an interview with Collider, Trevorrow indicated his commitment to scaling up the practical effects in the Jurassic World films:

We’ve actually gone more practical with every Jurassic movie we’ve made since the first one, and we’ve made more animatronics in this one than we have in the previous two . . . digital extensions on animatronics will be able to match the texture and the level of fidelity that, on film, an animatronic is going to be able to bring. And you didn’t use to be able to really mix them. You could really see the seams. And so that part of it is very exciting for me.

Many fans of the Jurassic Park franchise believe that its success was strongly due to the marrying of practical and computer effects. The awe-inspiring animated water hole scene eventually gives way to the extremely visceral and horrifying T. Rex attack, mainly done with an animatronic dino. Stan Winston Studios and their amazing practical creature effects have been showcased to some degree in all of the Jurassic Park films.

However, later sequels have opted for a heavier use of CGI, which in some cases has dulled the unique tangibility only practical effects can deliver. Both follow-ups in the Jurassic World series have been criticized for over-using computer effects. While Jurassic World: Fallen Kingdom did add more practical effects than its predecessor (such as the incredible animatronic Blue and T. Rex), it was not received as well.

Although Jurassic World: Dominion suffered similar delays to the rest of the entertainment world due to the global pandemic, it is expected to release June 11, 2021. Jurassic World: Dominion is directed by Colin Trevorrow and stars Bryce Dallas Howard, Chris Pratt, and Jake Johnson. It will also feature the returns of Jeff Goldblum, Sam Neill, Laura Dern, and BD Wong to their classic roles.