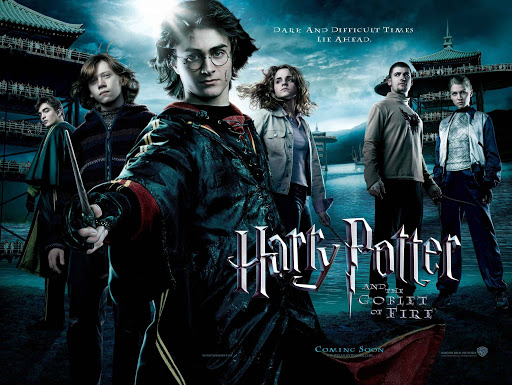 We compare the differences between the “Goblet of Fire” book and film adaptation.

Harry Potter and the Goblet of Fire marked a huge tone shift and lasting impact on the series with the return of Voldemort. Brought about through the staging of an elaborate scheme, Harry must undergo three dangerous tasks in the Triwizard Tournament—a tournament for wizard glory—culminating in the resurrection of the magical world’s greatest foe. While the previous three Harry Potter installments did have some dark elements, Goblet of Fire was when things started to get more mature.

Right off the bat, I have to congratulate how well the film established the impending danger of Voldemort’s return. Even though it retains the lightheartedness of the previous films in some parts, Goblet of Fire does still feel like a much more serious film, especially going into the third act. The characters are getting older, and the threats they face are, consequently, more challenging. In a way Goblet was a transition into darker things to come in the future of the series.

There’s one aspect of the film that really establishes the threat Voldemort poses, and that’s his acolytes. Goblet of Fire introduces the Death Eaters, the Dark Lord’s followers, as they attack the Quidditch World Cup in the beginning of the film; while the attack comes out somewhat rushed in the movie, I still got a grasp on the significance of the scene. To add to this, there is the scene in the graveyard, when Voldemort summons several Death Eaters to see him returned to his body. It just goes to show how this turning point is so much bigger than a single dark wizard, setting up the next three years of hardship for the magic world.

With over 700 pages (in the US version—the version I read), Goblet of Fire was nearly double the length of the typical 300-400 page books in earlier installments. That meant it introduced a lot more characters, one being Cedric Diggory, played by Robert Pattinson himself in the film—pre-Twilight. I honestly feel like Cedric was underused in this film, as his character seems so much more complete and present in the book. Rewatching Goblet, Cedric didn’t really stick out; sure Pattison nails the character’s charisma, but I feel like his screen time was very brief, and so his death doesn’t carry anywhere near as much weight as it does in the book.

The other champions don’t really have too much of a presence either; neither of them really stuck out. Viktor Krum, played by Stanislav Ianevski, has more personality in the book which just wasn’t translated to the screen. His romance with Hermione is hinted at through several instances in Rowling’s novel, but in the film, the two of them going to the Yule Ball together pretty much came out of nowhere. Then of course there’s Clémence Poésy as Fleur Delacour, who also gets nothing to do. I think all three of the other champions were decently casted, but the problem is that the script doesn’t really offer them any great moments. As a result, I felt like the tournament didn’t have as much stakes as it did in the book—it just didn’t feel like Harry’s competition in the tournament was anything to worry about.

There’s a whole host of other characters besides the champions too, such as Rita Skeeter, portrayed by Miranda Richardson—a character much more interesting in the book. Her onscreen counterpart retains the annoyingly nosy personality of the “reporter,” but in the book she is more of a nuisance, and Hermione discovers that the writer is an unregistered animagus, spying on the champions. I feel like including this would have not only made Skeeter interesting, but also shown Hermione’s intelligence.

Then of course, there’s Mad-Eye (played by Brendan Gleeson) and Barty Crouch Jr. (played by David Tennant)—essentially the same character, as we learn from the twist at the end. I think Gleeson and Tennant did a good job with the role(s); Mad-Eye/Barty Jr. is a very disturbed, but also occasionally funny character in the movie, just like in the book. The performance(s) were well realized, and I was satisfied with how they built up to the reveal. Mad-Eye was always one of my favorite Defense Against the Dark Arts teachers, so it was nice to see him done justice.

Then there were side stories that were excluded entirely, besides just the Rita Skeeter plot arc that I previously mentioned. One that sticks out to me is the Ludo Bagman character—a gambling addict and Ministry official who oversees the Triwizard tournament with Barty Crouch, Sr. in the book, but is completely removed from the film adaptation. There is also more of an emphasis on Harry’s training for the tasks (especially his trouble with learning the Summoning Charm) in the book, which I think really contributed to his growth as a character. I liked reading about him learning over the course of the year/tournament, but in the movie it feels like he was just lucky or already experienced enough with each task.

The tasks themselves were pretty mixed for me. The first two tasks—against the Hungarian Horntail in the first and the Merpeople in the second—were both much more exciting to me than in the book, mostly because the medium of film makes these sequences more engaging and intense. However, the third task was a bit of a letdown for me. The book details all sorts of creatures that the champions face in the maze, like acromantulas, a sphinx, and a boggart, yet in the movie all they really are faced with is a normal hedge maze with…vines that tried to trip them? It seemed a bit lazily adapted in my opinion. Maybe it was for budgetary reasons?

Either way, I feel like the main reason the maze was glossed over so much was because the actual important part of the third act was the graveyard confrontation with Voldemort. While I have my qualms about the Triwizard Tournament, the whole story had been leading up to this, and it was paid off well. The haunting presence of Voldemort reborn, in the flesh among the presence of his followers, is one of those movie scenes that feels so authentically horrifying.

Ralph Fiennes brings Voldemort to life in this film, perfectly instilling the sense of impending doom in the book. Fiennes has such a disturbing, yet charismatic presence about him that makes him the perfect Voldemort. Priori Incantatem—the reverse spell—is captured beautifully in the movie, as Voldemort and Harry’s duel brings the ghosts of Cedric, Lily and James Potter, and more to Harry’s aid. There’s a sense of powerful mystique in the book as the two wands trigger this phenomenon, and I think that the scene has some of the best visuals in the movie series as a whole (and that’s saying something).

Overall, Goblet of Fire was a mixed bag for me. It’s a much longer book than its predecessors—nearly double the page length—so there’s a lot more to unpack. While plenty of characters and stories were sidelined, I don’t think it’s really fair to say the film did a bad job, simply because of time constraints. The film did what it was able to, and ultimately, I believe all of the elements adapted were done with respect for the books. The Harry Potter series clearly has a lot of love poured into it, so while Goblet of Fire is not one of my favorites, I still believe it is tastefully adjusted from page to screen.