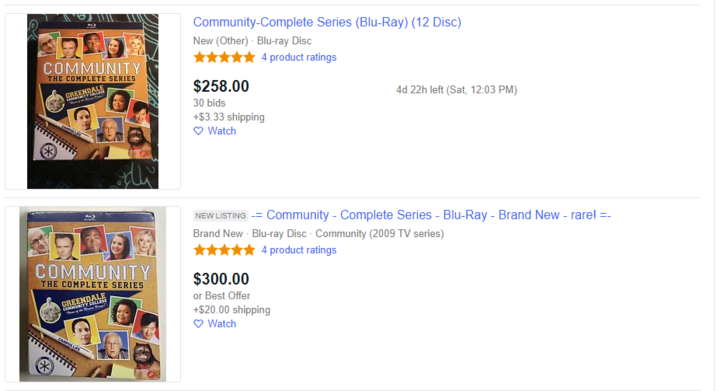 After a “Community” episode was deemed to have “blackface,” it was removed from Netflix and the DVD sales are outta this world.

Netflix and Hulu have removed a fan-favorite episode of Community from their streaming services in the last few days. ‘”dvanced Dungeons and Dragons” was removed due to its use of “blackface,” leaving a gap in the middle of Season 2 of the beloved show.

In the episode, the group finds themselves playing a game of Dungeons and Dragons where Chang (played by Ken Jeong) enters the game with black makeup covering the entirety of his face, along with a white wig, contact lenses, and pointed elf like ears.

The “blackface” was actually pointed out by the other characters with Shirley (Yvette Nicole Brown), a black woman, asking, “So we’re just going to ignore the hate crime, huh?” Chang responds, “I’m a dark elf or a drow.”

The implications of the “blackface” were deemed to be in poor taste, as Netflix took it off of their streaming service, with Hulu following shortly behind a few hours later.

The call to remove it was fairly shocking considering the show itself recognized and repudiated the “blackface” implications. With so many early-to-mid 2000’s sitcoms featuring gay or stereotypical jokes, I’m not sure what scenes or shows will be removed from services next. Considering this use of “blackface” was deemed worth removieng from streaming services, it makes me wonder about the film Tropic Thunder. Like in this Community episode, the film recognized and disputes the use of “blackface.”

The removal of the episode has made sales of the show on DVD skyrocket. Many places including Amazon, Best Buy, Target, and Walmart are completely sold out of the entire show for every season and the collection.

Many people are trying to take advantage of the shortage of DVD’s selling seasons and collections by massively scalping the prices. Some are even searching for hundreds of dollars on eBay.

I’m not sure how long the digital versions will be available, but my advice is to keep any physical or digital copy of anything that has similar controversial scenes. Even though this case of “blackface” is more like damage control, actual renditions will not last long as tolerance for blackface or even the perception of it has been deemed unacceptable by corporations.