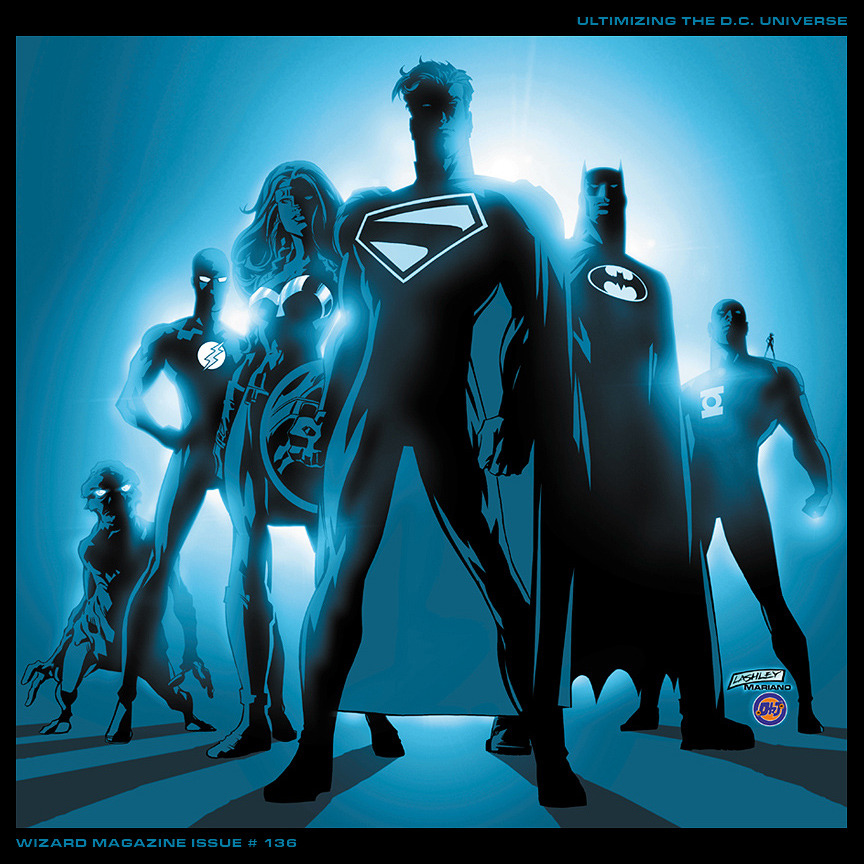 Cast your mind back to the year 2003. Superhero movies were starting to find their footing with movies like Spider-Man(2002), Batman Begins was barely an idea in Christopher Nolan’s head, and Marvel had unveiled their line of Ultimate Comics. Ultimate Spider-Man by Brian Michael Bendis, Ultimate X-Men by Mark Millar, and The Ultimates by Mark Millar were very popular. The comics were popular due to the new and refreshing takes on classic characters as well as not being restricted by decades of complicated continuity.

Wizard Magazine was a comic based magazine with news for new comics, movies, and other nerd related properties. In 2003 they asked the question of what if DC had an Ultimate line of comics like marvel. They commissioned some artists to redesign iconic characters and create short pitches for comic series. These pitches are really interesting, and I wanted to look not only at the pitches themselves but talk about the potential they may have had.

Ultimate Batman is interesting to me because it wanted to do the dark and realistic take on Batman before it was the cool thing to do. Remember this predates Batman Begins by 2 years. For starters I really like this redesign, it maintains the iconic look of Batman but just adds a touch of realism, something I personally wish Nolan would have done, and wasn’t done until Zack Snyder came along in 2016. There is also obvious inspiration from the David Fincher movie Se7en. Mostly in Commissioner Gordon being designed after Morgan Freeman’s character. The proposed plot itself doesn’t do too much to change Batman’s character other than adding Lex Luthor as Bruce Wayne’s antagonist which I like, and a change to the Joker. Shifting Joker from a crime lord or serial killer to a vigilante is a risky move I can see completely working. Using the Joker as a dark foil to Batman is brilliant, having him be a dark parody of Batman could make for interesting storytelling. If this ever got published I could definitely see elements making it into Nolan’s films and I would definitely give it a read.

Ultimate Superman is very clearly inspired by Smallville which was very popular at the time. I think this pitch was designed almost as a sequel to the show, picking up where it would eventually leave off. I’m not a fan of the proposed love triangle between Lana Lang, Lois Lane, and Clark Kent, which seems like a bit of unnecessary drama. Brainiac’s new take could work, he almost feels like General Zod in Man Of Steel, a Lone Survivor who wants to revive Krypton by remaking the earth. Having him be the creation of Jor-El is also a good way of tying it together, and to see him try to “Fix” Superman could have some great character moments. What interests me most is Superman’s friendship with Lex Luthor, again very Smallville inspired. The idea that Lex has grown to hate this being of immense power, only to discover his best and only real friend is that person he hates most. How Lex doesn’t want to believe it is so interesting and if written well could be the best part of this series.

Ultimate Wonder Woman takes the whole premise of her character and turns it on its head. The Amazonions are no longer peaceful isolationists but conquerors, and Dianna is their elite spy. This change leads to a proposed character conflict of Dianna being forced to choose between man’s world and her Amazonian heritage. Apart from this nothing else is really changed. This story subversion could make for a fresh take on Wonder Woman, and a good character drama.

Ultimate Flash has more drastic changes to the character than the previous two pitches. For one Barry is in Los Angeles which feels like an unnecessary change. His costume is something I’m not the biggest fan of, it just looks too simplistic. Not all changes made are bad, I like Jay Garrick being a Detective and the Flash’s confidant. A change which I think could really work is the characterization of Wally West. I know a few people will hate this change but I just think it could work so well on a thematic level. Wally West being the Black Flash and the harbinger of Barry’s failures could be so powerful.

Ultimate Green Lantern is another twist that changes the mythos for the better of the story. The decision to have John Stewart instead of Hal Jordan or Kyle Rayner is no doubt due to the popularity of the Justice League Animated series. I think an underlying tension of Sinestro’s true intentions could make for some really good scenes. I love the twist of Sinestro controlling the Green Lantern corps is a good one, but there’s danger of it being predictable. I think it’d be interesting to see Jon Stewart go through a second military regiment and going against the corps can be the perfect parallel to being discharged from the marines. I think this run could have proven to be one of the more popular ones.

Ultimate Teen Titans is probably my least favorite of all the pitches. This one has a lot of changes made just for the sake of change. Roy Harper is now Green Arrow as opposed to Red Arrow or Arsenal, for no real reason other than to include a Green Arrow. Robin has no affiliation with Batman, which REALLY bothers me, they left in Donna Troy’s connection to Wonder Woman so why not Robin’s? The overall plot could be interesting if Written well but poor execution could easily doom this premise. The pitch teases a crossover with the Justice League so I can only assume Robin would join Batman after that. It’s cool to see Roy’s drug addictions be made a central plot point and I could see how the superhero celebrity aspect might be interesting, The Ultimates pulled it off well so maybe this series could too with the right writer.

Ultimate Justice League gives some pretty classic Justice League with these new versions of the characters. Martian Manhunter is changed to a more small and shriveled up Yoda type character and I think it could work. The Atom is added as a woman this time though it isn’t exactly clear if it’s a re imagining of Ray Palmer or a new character entirely. They seem to want to focus on more obscure Justice League villains like Despero and The Key, which is cool. I especially like how the Key wants to open up the gates of hell, could be a really awesome story. There isn’t too much thematically to these stories just seeing new versions of iconic characters in cool action set pieces.

That was the entirety of Wizard’s pitch. I would have definitely liked to have seen how all these stories would have played out. Some elements of these stories seem to have been used in later Media like Amazon’s attack and Batman: Earth One. It’s easy to wonder the impact these comics could have had if they were ever made. Maybe we’d get unique fan favorite characters like Miles Morales. I guess we’ll never know but nevertheless these are fun versions to think about.