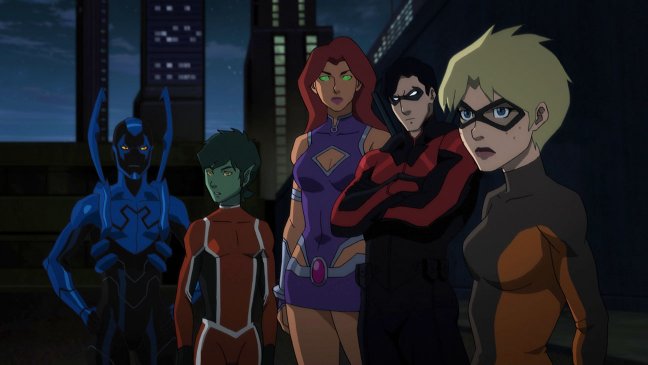 Teen Titans: The Judas Contract was released in 2017. The film was directed by Sam Liu and stars Stuart Allen, Sean Maher, Christina Ricci, Kari Wahlgren, and Miquel Ferrer. The plot sees the Titans trying to uncover a plot by Brother Blood, meanwhile Deathstroke uses his mole, Terra, to infiltrate the Titans and have them play right into his hands.

Adapting an Iconic story like this is a difficult task to be sure. It’s even harder to adapt when trapped in the confines of a shared universe. I think this movie has all the good qualities of previous animated movies, that of a good cast, and decent animation. I think Sam Liu does a decent shot at executing a less than stellar script. I really did like the Kevin Smith cameo, it was cool to see him in the universe.

I do feel this movie falls very short in a lot of areas. As I said before, The script is not very good. It definitely could’ve used more drafts before settling on a final version. The dialogue is extremely cliche, try as hard as the cast may, the poor dialogue just can’t be ignored. There’s a very creepy implied romantic relationship between an underage Terra and an old Deathstroke. This adds nothing interesting, it’s just creepy and makes you feel uncomfortable watching it. The villains are very weak, Brother Blood is a pretty standard egomaniac, nothing special. As I said in my review of Son Of Batman, this version of Deathstroke is just pathetic, just a disgruntled League Of Assassins reject.

I feel this movie doesn’t work on a lot of levels. This script is really bad with cliche dialogue and poor character work. A lack of interesting or even threatening villains takes away from the stakes. The decision to add a romantic dynamic to Deathstroke and Terra’s relationship is just creepy and adds nothing, still not sure why it was included. A good cast and good director just weren’t enough to save this movie.