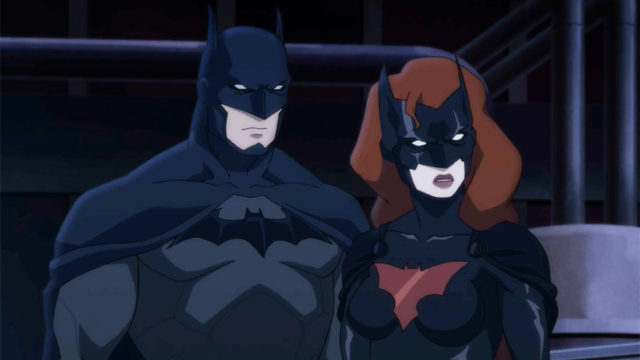 Batman: Bad Blood was released back in 2016. It was directed by Jay Oliva and stars Sean Maher, Stuart Allen, Jason O’Hara, Yvonne Strahovki, Morena Baccarin, and Gaius Charles. The plot sees Batman go missing, leaving Gotham at the mercy of supervillains, like Heretic. Nightwing must take on the mantle of Batman in Bruce’s absence, while recruiting new members to the Bat Family like Batwoman and Batwing.

This movie includes some new additions to the Bat Family and they are both welcome ones. I don’t think Katherine Kane overstays her welcome as some critics have said. Her connection to Nightwing isn’t really clearly explained but her character itself is well used here. Batwing is also really interesting. I only wish he had more screen time, and more to do in the plot. The animation is once again very good, with smooth animations which make for good fight scenes. The voice cast is outdoing themselves in this film. It’s good to see Sean Maher get more to work with in this movie.

If I’m being honest I’m really not the biggest fan of this movie. It’s lacking that edge that the last movie had, and that tonal change is felt. This movie is also not fully realized the way it could be if it were 10-15 minutes longer. Plot points like Nightwing’s feelings towards Batman just don’t get the time they need to be fleshed out and it’s detrimental to the themes. My biggest flaw with the movie is a spoiler so be warned. Talia Al Ghul seems to do a complete 180, and turns into this cold emotionless uncaring person who’s teaming with sociopathic evil. THis characteristic is a far departure from her portrayal in Son Of Batman. She was never the nicest person but she did genuinely care for Damian and Batman. In this film she now sees them as disposable and a means to an end.

Batman: Bad Blood adds some new intriguing characters into this shared universe. These characters are nice additions and I would love to see more from them. The animation is really nice to look at and makes for entertaining fight sequences. However poor pacing and a lack of development for some story beats drag the film down. A complete character change also really ruins the movie for me. I’d say this one is honestly worth skipping over As it doesn’t really do justice to its source material or even the story it wants to tell on its own.