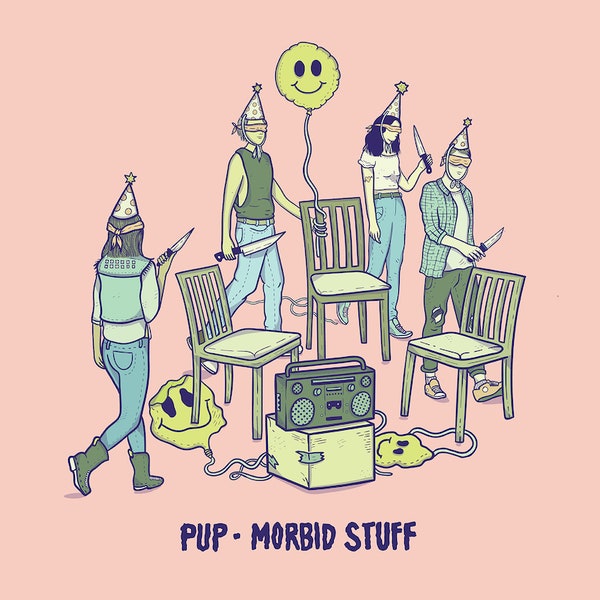 Energetic and Creative, PUP Delivers Yet Another Home Run With Latest Release.

For their latest record, PUP has delivered an incredibly energetic, relentless, and largely more upbeat album than previously seen. As the band grows, their music reflects their growth in more mature themes, as well as providing a new perspective on themes explored earlier in their work. Like previous albums, Morbid Stuff deals with disillusionment and insecurity. Songs like the titular “Morbid Stuff” highlight Babcock’s own insecurities, as well as acknowledging how far he and the band as a whole have come since their early days. Where songs like “Kids” express that same, disillusioned mental state heard on earlier works, “Morbid Stuff” is almost optimistic in its approach.

“Just like the kids, I’ve been navigating my way

Through the mind-numbing reality of a godless existence

Which, at this point in my hollow and vapid life

Has erased what little ambition I’ve got left”

Where specific songs previously wallowed in anger and distress, songs like “Scorpion Hill” express the innate comfort within the chaos that comes with this mental state. Babcock acknowledges and laments the darkness he finds himself in, while simultaneously expressing the security he feels, as these are emotions he has grown accustomed to. This resonates deeply with fans as it relates to a variety of uniquely unhappy or sorrowful experiences.

Given the band’s increased success since their first ventures, Morbid Stuff resonates with the changes the band has undergone. Songs like “Closure” and “See You At Your Funeral” acknowledge the things left unsaid or unhappy endings that are inevitable throughout one’s lifetime and the important lessons one learns from the experiences.

The chief criticism of PUP and their work comes in their forceful approach to their instruments. The album slams on the gas right from its first song and tends to stay in that region throughout the album. While I believe this highlights the subject matter of the individual songs, the album overall does feel slightly unchanging in its perpetual angst. However, this criticism falls apart in the final moments of the album, as Babcock sings mournfully throughout “City,” leaving the album with a sombre tone as the final notes draw to a close.

With one foot in the gutter

And the other in the grave, I was thinking

How long will self-destruction be alluring?”

Morbid Stuff might just be some of the band’s best work to date. With sophisticated command of both lyrical and musical language and the ever-present abundance of instrumental talent, this record is a home run for PUP.