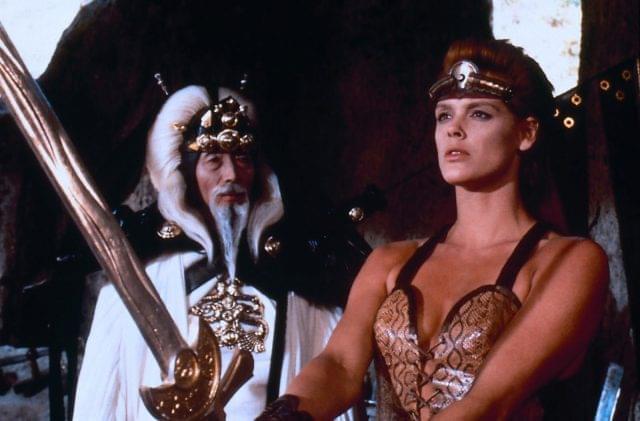 “Red Sonja” was released in 1985, and directed by Richard Fleischer. It stars Brigitte Neilson, Sandahl Bergman, and Arnold Shwarzenegger. The plot sees Red Sonja seeking revenge against the Queen Gedren for the murder of her family.

This movie tones back the camp of “Conan The Destroyer”. It tries to be more serious like the first film and mostly succeeds at maintaining its tone. It’s not without its moments of comedy which always landed for me. The dynamic between Falkon and Prince Tarn keeps the movie light hearted and they’re pretty fun to watch. The action is also pretty good, it’s slightly more violent than “Conan The Destroyer” and the stunt work is impressive.

Arnold has a supporting role this time around(surprisingly not as Conan) and he does pretty well in his role. He doesn’t outshine the other characters and is still nice to watch. However, I don’t feel his character did enough to justify his inclusion outside of marketing purposes. The film’s pacing is really bad, It goes by extremely quick which makes the plot feel vague. For example, the very beginning of the film sees Red Sonja receive a divine blessing from what I can only assume is a goddess. She’s really there to deliver necessary exposition before the plot glosses over this with no explanation. If you’re wondering who the mysterious figure was or her stake in the plot, well keep wondering.

Red Sonja seems to strike a balance between the more serious tone of “Conan The Barbarian” and the fun camp of “Conan The Destroyer”. It’s full of good action, and likeable characters. However it’s troubled pacing holds the plot back from being fully fleshed out. This was one fun watch but it isn’t nearly as interesting as any of the Conan films.