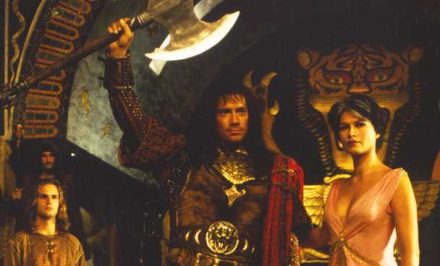 Kull The Conqueror was released on August 29, 1997. The film was directed by John Nicolella, and stars Kevin Sorbo, Tia Carrere, Thomas Ian Griffith, and Karina Lombard. The plot sees the barbarian Kull who is made king after killing the previous one in self defense. His kingdom is threatened by the evil witch Akivasha, who seeks to bring forth the armies of hell to restore her dark empire.

This movie is movie really puts the fun in dumb fun. I think Kevin Sorbo is pretty good in the role and he plays off the cheesiness of the script pretty well. The music was amazing, The heavy metal soundtrack served the tone pretty well, and really made every fight scene where it was present. The action was kinda fun, there were a couple to many cuts for my taste but it was far from incomprehensible.

What really didn’t work for me were the villains. They were kind of bland with one note motivations. The witch is evil just because, and the general just wants to be king, not much to them. The effects are the most dated thing in the movie. They use a lot of CGI for things like fire and magic and they look about as real as the fires from Spawn(Which came out that same year). The character of Litefoot is also very useless. He doesn’t do anything he’s just kind of there, and has no characterization.

Overall, This movie is bad, but I’d be lying if I said I didn’t have a fun time. Fun action and music is what will keep you watching. Bland villains and useless characters drag the film down a bit however. This movie is a lot of fun when you just turn your brain off and watch, and you definitely won’t feel like you’ve wasted your time. This movie is far from good, but it is a good time.