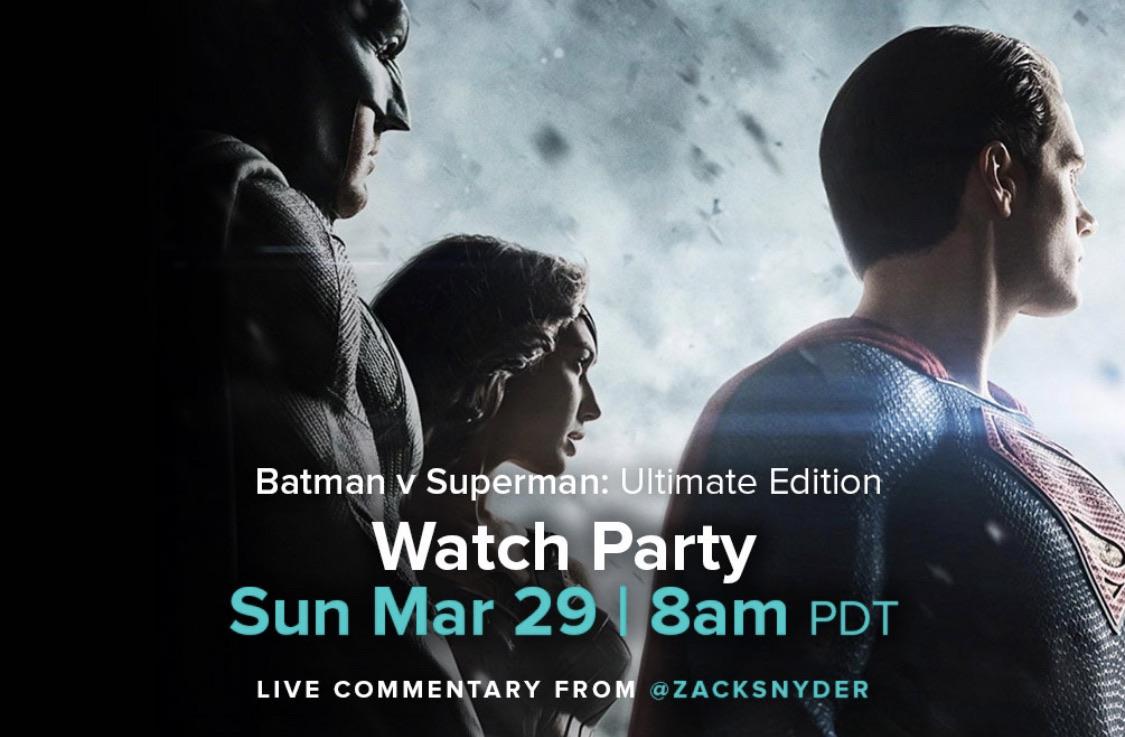 A review of the live commentary Zack Snyder gave on the fourth anniversary of Batman V Superman’s release.

It is not just movie fans who are stuck inside during these trying times but creators as well due to Hollywood basically being stuck at a standstill with productions being halted and shut down due to safety precautions being taken.  As a way to connect with fans some directors have started to have watch events where they will watch one of their movies and live-tweet behind the scene facts or commentary on their films.

With the 4 year anniversary of Batman v. Superman: Dawn of Justice being on March 25th, director Zack Snyder decided he was going to go one step further and watch the movie with his fans.  That is correct, Snyder set up a live event using the Social Media App, Vero, and gave us a live commentary of the extended edition of the film.

While this is a polarizing movie with fans of both characters it is great to have insight into Zack’s movie making process, the film itself, and the characters.

Along with his cup of coffee to watch the film Zack also brought along the 4 story board books that were filled with the cards he drew out in the film.  He went on to explain that when he makes a movie the process for him goes script>story board>filming. He sketches the scenes based on the script because he has such specific shots in mind for filming.  Then he tells people when they start shooting not to refer to the script but to refer to the storyboards because those are the details he wants included.

When he first pulled out the story boards for the movie I was expecting to see a rough version of some things we saw in the film but it looked like someone had paused the movie and drawn the scene exactly as it was in the film.  The example he showed that really stuck out to me was the pearls of Martha Wayne’s Necklace being on Joe Chill’s gun and breaking with the gunshot. He is a director who visualizes the movie early on and make what was in his head into reality.

Circles and The Plan

As soon as the film starts Zack explains that the film was designed as a circle.  It both starts and ends with a funeral, and while the first funeral is to symbolize hopelessness at the end of the movie we are shown that it can mean more than that.  While discussing his choice to introduce and kill Jimmy Olsen he informs us that the original plan was to have his series of movies be five parts. The killing of Jimmy Olsen was used to imply there are consequences in this world and the things that are happening will change it.

The events are like dominoes and the characters will be rebuilding as each one falls.  This idea supports the previous plans Zack has mentioned of having Darkseid winning at the end of one of his films and the following one being the heroes fighting back in this new world. Confirming this 5-part film arc really makes me think — if the SnyderCut had been released as the original film what would the DCEU look like today?

There are many moments in the commentary where Zack discusses the locations they shot in the movie.  The majority of the film was shot in Detroit differing from Man of Steel which had most of the Metropolis was filmed in Chicago.  Due to the location change whenever we are inside the Daily Planet green screen was used to match the outside with the scenery of Chicago because the building outside the Planet would be different from what we saw in Man of Steel. Zack mentions multiple times how great the city of Detroit was and you really get a sense of how grateful he is for all the locations he was able to film at.

The scene we are introduced to Batman in was an old abandoned building which supposedly was renovated right after they filmed there. The lake house that Bruce lives in was made specifically for the film. It was made to be very minimal in contrast to the Batcave below to show the comparison of the two lives he lives. One very minimal not mattering too much and the other is filled with everything he needs.

I never noticed before but he also pointed out that Alfred lives in a trailer right next to where Bruce is showing that he does not need much but to just be around helping Bruce. He also states that the batcave was fully built in a soundstage so they can make it exactly what they wanted.

With the character of Superman Zack talks about how Superman was created in a less complicated world that no longer exists.  He wanted his Superman to have to deal with a gray morality. Things are not black and white for Superman in this world which I believe is on of the reasons you may hear people say that Zack doesn’t understand Superman. A statement I wholeheartedly disagree with.

Zack uses a lot of symbolism in the film that a lot of people are able to point out but in this he goes a step further and tells us what it is meant to be. Superman in this world is scene as a savior figure and God.  When he is pulling the boat through the ice it is similar to Jesus walking wit the cross. Holding rocket above his head after it exploding is meant to connect to Atlas holding up the world. When Superman goes to get the Kryptonite spear in the water it is to symbolize baptism.  After that moment when he tells Lois he loves her he knows that he is going to sacrifice himself to stop Doomsday.

Even the death of Superman at the end of the film when they lower him down is inspired by Jesus being lowered from the cross. Zack brings up that he uses a lot of religious imagery as it is something everyone can connect with.

Batman in this is at a point in his life where he is killing people.  There were numerous times during the commentary where lethal damage was dealt to characters and Zack would say “Oh, they’re fine”, joking about how people were upset that Batman killed in this movie.

He discusses that this movie is also about the rebirth of Batman. At first he believes that the chance of Superma being evil is an absolute, he mentions this is simliar to the take Dick Cheney had after 9/11.  When fighting Superman if you couldn’t already tell Bruce’s suit is heaily inspired by the Dark Knight Returns suit he uses to fight Superman.

Zack decided for the the kryptonite weapon for Bruce to build a spear because it allows him to be personal with the attack as well as mirroring the spear that was used to stab Jesus on the cross.  The mask breaking during the fight used to show Bruce’s humanity starting to break through. When Bruce is dragging Superman in the basement of where they were fighting and talking about forcing the world to make sence, this is him justifying a reality that is not in fact true.

The rebirth of Batman finally comes during the famous “Martha” scene.  At this moment Bruce sees the humanity in Clark while at the same time realizing he is becoming what he has been trying to stop for years. Superman has shown him his humanity and Saving Martha Kent is a way to redeem himself from not saving his parents. The final piece of evidence Zack says shows Batman returning to his humanity is when he does not brand Lex at the end of the movie.

During the Knightmare sequence he is shown a world where this did in fact happen.  Zack informs us when Lois is killed in this potential future it make Superman so distraught that he succumbs to the anti-life equation.

As it turns out the opening sequence of the Knightmare takes place in the dried up lake bed of where Bruce is living during the film with the Batcave as the base of operations beneath it.  Zack then drops some major knowledge bombs on the plans for future films as he mentions outright the use of the Flash’s Cosmic Treadmill.

Going further in a future movie Batman, Flash, and Cyborg would have a discussion about where to send Barry back in time to stop the Knightmare from happening.  Cyborg would let batman know that he decided there are 2 points in time that have the potential to stop their future. When he tells Bruce the two places Bruce chooses the time based on him having already lived through the world where Barry went back to warn him about the future and it did not work.  I personally found this an awesome fact to be included.

Since we are not going to be getting the 5 part film why not let us know some intimate details of the story.

The Lex Luthor that we see in BvS is drastically different from the once we have seen before.  We learned that this Lex was meant to be more of an intellectual than a Brute. He uses wordplay to instantly judge someone based on if they are able to follow him.  He sees himself as prometheus providing fire (knowledge) to the world.

Multiple times in the film we see Lex holding a blue ball. This is used to symbolize him having the world in his hand, a connection I had not made before.  We are shown the contrast between Lex and Bruce in the way they keep the places of their fathers. They are opposites from each other, Lex keeps his father’s study pristine the exact way he kept it and Bruce lets the Wayne Manor crumble with the passage of time.

After the communion that Lex has with Steppenwolf Zack confirms Lex is now aware of Darkseid and apokolips. His yelling at the end of the movie is not the rambling of a mad man but someone who is aware that something is coming and whatever it is he may have a part to play.

Hearing Zack talk about the film was an enjoyable experience and while at times I found him sometimes going off on tangents I am glad that I watched. The way he talks about it you can tell he really enjoyed making this film  If you would like to listen to the commentary you are able to find it below: