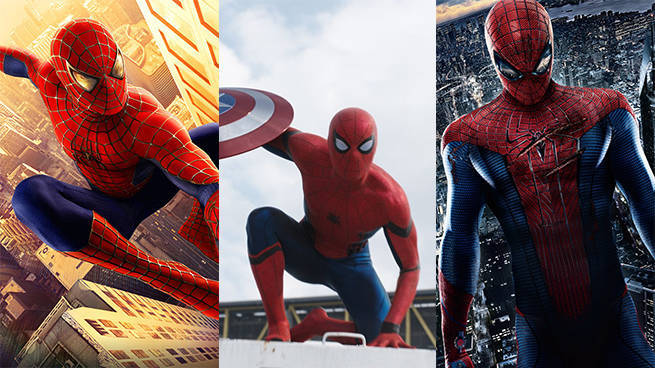 For years the debate has raged on about each film iteration of Spider-Man, so who the most accurante?

For years the debate has raged on about each film iteration of Spider-Man, one of the most iconic and beloved characters in comic history, and who best portrayed the quick-witted web-slinger. There is obviously much to discuss when it comes to the overall “best Spider-Man film” that so many seek. But besides the question of best overall film, which of the three major film adaptations of Peter Parker’s Spider-Man is the most comic accurate?

Ah, Tobey Maguire. This portrayal of Spider-Man seems to be the most divisive as fans either love or hate Maguire’s take on the character. In essence, Peter Parker is a normal high school nerd. He’s awkward, a tad geeky, and caring. But when he dons the red and blue suit he becomes the snarky and quick-witted pun-lover we have all grown to love. Where Maguire soars in his portrayal of the awkward and relatable Peter Parker, his portrayal of Spidey’s persona falls short. Maguire captures the innate humanity of Peter Parker exceptionally well; he’s dorky and kind, he’s falling hard for Mary Jane, but doesn’t come off as creepy or obsessed, and above all, he’s confused. This works incredibly well for The Raimi trilogy as it captures the conflicting feels Parker feels at his newfound superpowers and explores how excited he is by his abilities, but anxious about the responsibility that these new abilities afford him. This captures the essence of Peter Parker. As Spider-Man however, Maguire feels bland, with the pressure of his responsibilities outweighing the fun that epitomizes the character in the comics, and this is where I feel Maguire falls short.

Next chronologically comes Andrew Garfield. This iteration deals with the emotionally grueling Amazing Spider-Man and The Amazing Spider-Man 2’s “The Night Gwen Stacy Died,” echoing aspects of the limited series run of “Spider-Man Blue.” This film adaptation seems to be the most generally disliked by fans, being the worst-rated adaptation according to Rotten Tomatoes and Metacritic.

Where I feel Andrew Garfield’s portrayal excelled was as the snarky web-slinger himself. His quips and mock accent fit the character well and showed an aspect of enjoyment that was lacking in the Maguire trilogy. He fell short, however, in his portrayal of Peter himself. Beyond the criticism that Andrew Garfield is just “too conventionally attractive to be a convincing nerd,” He also comes off as borderline creepy. Where Maguire’s Peter Parker was almost too serious and awkward, Garfield’s wasn’t awkward enough, and Garfield was almost suave in his portrayal of Peter. This was where I, and I believe many audience members, felt a disconnect to his portrayal of the beloved character.

Lastly, Tom Holland. As the youngest actor to portray Spidey in a live-action film, Holland adds a youthful exuberance to the role. I am of the opinion that Tom Holland is the best live-action portrayal of Spider-Man that we have seen thus far. Holland nails the ‘adorkable’ nerd that Ditko’s Peter Parker is, pining over a girl he sees as unattainable. He’s awkward and self-doubting and ultimately relatable, that is until he dons the Red and blue spider suit. As Spider-Man he is quippy and sarcastic, but overall friendly. He shows the aspect of Spider-Man that I believe was most prevalent in the early comics: How much fun it is.

While all three major film adaptations have their individual successes and failures, I believe Tom Holland’s Spider-Man, and specifically his portrayal in Spider-Man: Homecoming, to be the most accurate to the Ditko comics due to his even and realistic portrayal of Peter Parker, and his web-slinging alter ego.

1 thought on “Tobey Maguire, Andrew Garfield, and Tom Holland. But who is the most accurate Spider-Man?”