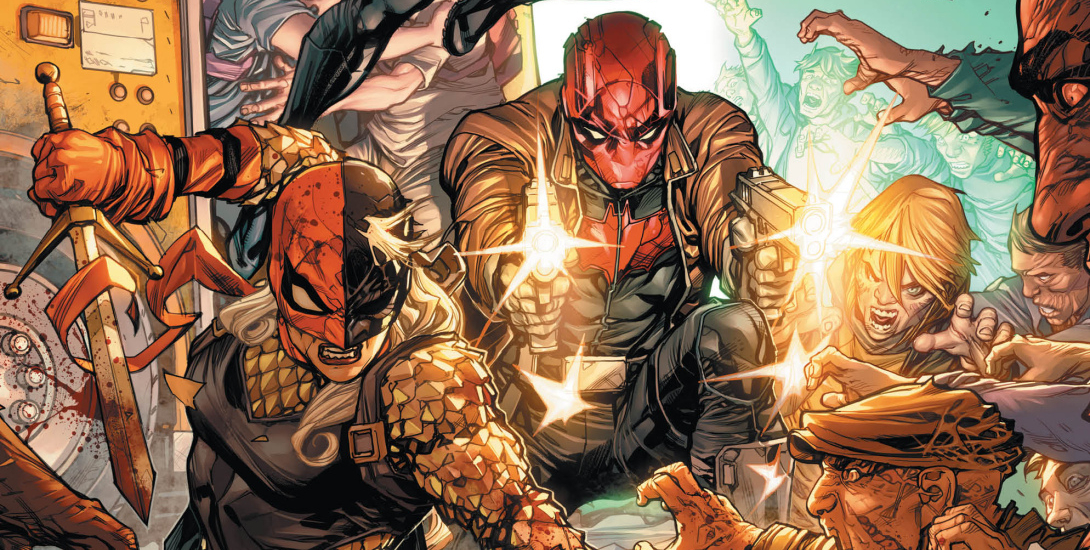 I find that usually when I love the first issue of a mini-series, the second issue tends to be a disappointment. While I don’t think that issue 2 of DCeased Unkillables, written by Tom Taylor with art by Karl Moster, is as good as issue 1, it most definitely does not disappoints.

It begins with Jason Todd, Jim Gordon, and Cassandra Cain discussing what to do about the room of undead zombies in the orphanage they are holed up in. While Jason believes they need to get rid of them, Jim says they aren’t doing any damage and to leave them. They are interrupted when a message on the radio lets them know that there are two safe zones set up. One is on Themyscira and the other is in Poison Ivy’a jungle in Gotham, neither of which they will be able to make it to with 43 children.

Back on Vandal Savage’s island, Mirror Master has told Lady Shiva he found someone. They walk through the mirror and (surprise) they end up in the Orphanage. Lady Shiva finds Cassandra and offers her a place with them on the island, but Cassandra, being the hero that she is, says the kids have to come too. Lady Shiva’s offer quickly turns into a command as she tries to knock Cassandra out to kidnap her and take her to the island. This is quickly interrupted by Jason and Jim stopping the fight. Lady Shiva goes to leave and in a great emotional beat Cassandra says that she could stay in the orphanage with them but she returns to the island.

Returning to the island they find an unhappy Vandal Savage. Slade reminds him he’s brought a bunch of murderers on this island and if they are all angry, they may kill each other before the zombies do. It is a great moment, with Slade laying down the cards to make his point. This moment really gives an insight into Slade in this post-apocalyptic world. It’s not about money or jobs anymore, it’s about surviving, and he seems to be the voice of reason in the band of misfits. Vandal relaxes and invites Slade to speak with him. His daughter voices that it might not be the best idea. Inside the room, he joins Vandal and sees Creeper strapped to a table with his chest ripped open. Of course, in a classic double cross, Vandal says he is going to cut then open to study them. Until a sword pops out of his chest, which he easily deals with. However, something Vandal cannot deal with is getting ripped in half by Zombie Wonder Woman, because she shows up and starts murdering whoever she can. Up until then I had though we had seen the last of the super hero zombies and that they had left to chase the ships that went into space. I should have known better.

Mirror master and Snart sacrifice themselves to get everyone to the only other safe place they know of: the orphanage. Now one would think that Mirror Master becoming a rage zombie would be a terrible thing, and they would be right, but that comes later. The villains show up at the orphanage and the talk immediately turns to what the next step is; not without some small digs at each other though. Slade learns how many kids they are with and he immediately brings up starting to train them. Jim Gordon shoots this down with faster aim then Deadshot could. Slade asks for the room and once again lays out his cards on the table. He connects with Jim on his loss and then he explains they aren’t doing the children any good pretending everything is okay and not teaching them how to defend themselves. Slade informs Jim that he doesn’t want to lead, and if Jim doesn’t step in, Bane will. Once again Deathstroke gets what he believes is best. Jim agrees and lets everyone know they can stay and that preparing to survive starts tomorrow.

We then get a great callback to the opening where Rose asks what is behind that door. All of the villains agree that they need to kill the zombies. It isn’t safe having them here. Slade tells Jim to go distract the kids while they take care of it. He looks to everyone to see if they will say anything and then Cassandra brings him upstairs. This felt like the moment where Jim realizes the world has truly changed. There is no way these people are changing back and with that he leaves the room.

When the doors open Jason immediately freezes as he sees Billy Batson is among the rage zombies. I thought we were going to see a huge battle but I guess the rage zombies are not able to speak. He goes to tell everyone who it is but he realizes that “It doesn’t matter” as they blast all the zombies away. Good thing it didn’t matter, because I doubt this team could take out a zombie Shazam.

We are then given a montage of the training the kids go through, each villain training the children in their own specialty. This goes on for three months, and we also see most of the villains having a good time teaching/training the kids. Even Solomon Grundy and Cheetah are starting to care for these kids. The montage ends with Slade explaining he is being so tough on the kids so they will survive and he blames Batman being soft on Jason as the reason he was murdered by Joker. He then switches gears completely, asking if Rose and Jason are a thing, telling them they deserve to be happy since they are all probably going to die. Slade’s straightfoward-ness gives us a comedic moment here and reinforces how much I have been enjoying this character. You would believe him to be a precog as well because soon after the conversation Jason and Rose share a kiss.

Of course, that moment of happiness must be ruined, as Zombie Mirror Master has found his way back to the orphanage. He infects Bane and then goes to grab a child. Deadshot is able to save the kid, but at the expense of his own life. As the team realizes Mirror Master is back and that they need to fall back, Cassandra comes in. She lets them know that Bane is infected and he’s gone outside. It ends with Bane breaking through the barrier and things getting a whole lot worse.

I am excited for the conclusion of DCeased Unkillables in issue 3 and would love to see this get its own series. With the announcement of DCeased 2, the Justice League will be returning to Earth, and maybe we will see these characters return, if they survive the 3rd issue.