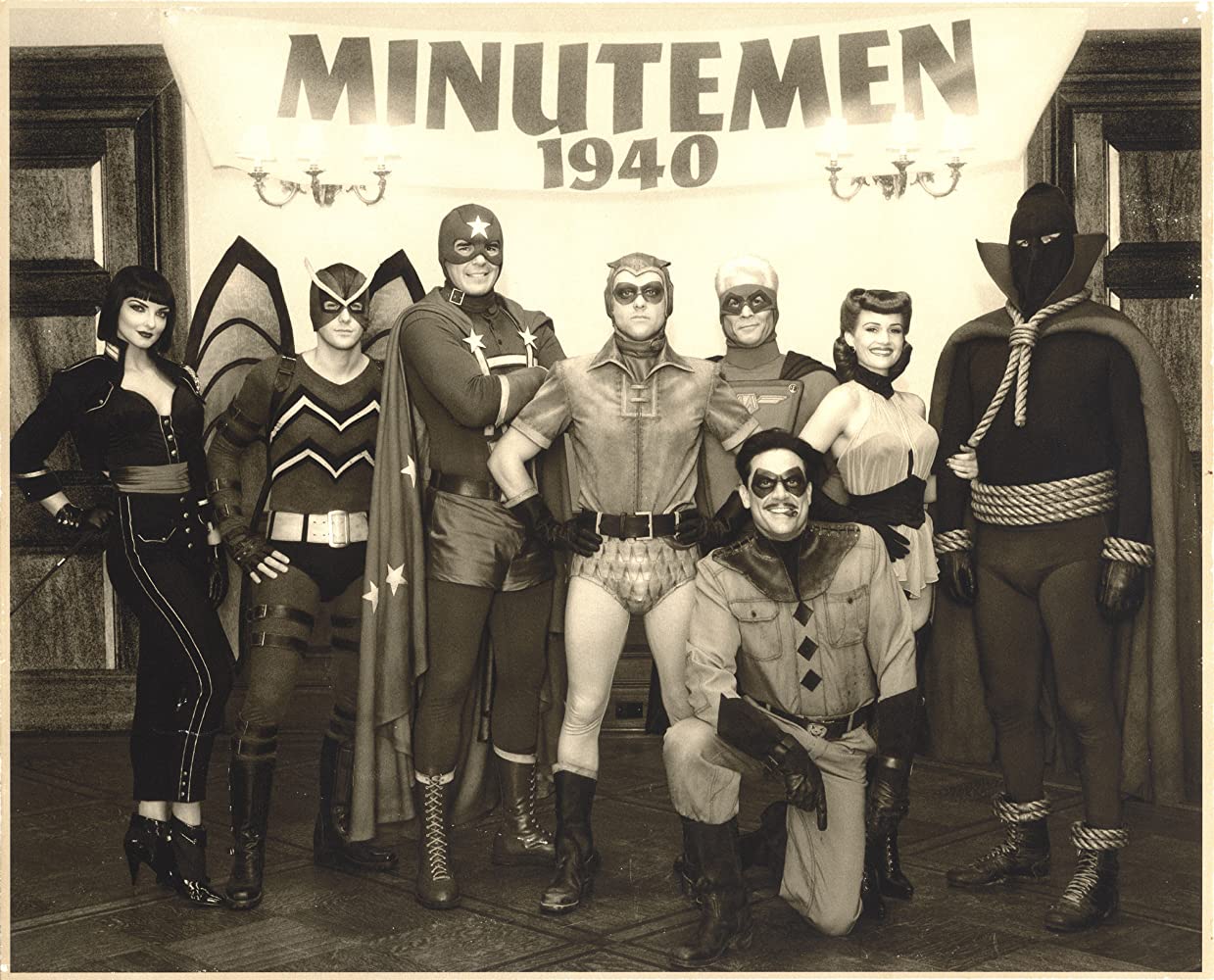 Here are some examples of crime-fighters who might be the closest we’ve gotten to comic book heroes, even if their actions weren’t so heroic…

Famous comic book hero alliances such as Marvel’s “Avengers” and DC’s “Justice League” have dominated pop culture for decades. Before they were appearing on the big screen and shattering box office records, they were infecting the minds of readers who purchased stories of good triumphing over evil off shelves in comic shops.

Unfortunately, our reality has yet to see the Incredible Hulk, Superman, or any other super-powered individual arrive to save the day. However, history shows that radioactive accidents and aliens are not necessary for individuals to rise up against perceived injustice. Here are some examples of crime-fighters who might be the closest we’ve gotten to comic book heroes, even if their actions weren’t so heroic…

Despite the countless horrors committed at the hands of millions of Nazis during the Holocaust, a relatively small amount were truly brought to justice for their crimes against humanity. Only 24 were brought to the Nuremberg Trials, 3.5 million out of 13.5 million eligible were charged, and by 1949, only 300 Nazis faced prison time. Unsurprisingly, there were a few Jews who had watched 6 million of their brothers and sisters perish, and weren’t quite satisfied with that number.

While the rest of the world moved on from World War II, a group of young Jewish rebels did not. In the spring of 1945, Abba Kovner, leader of a Jewish uprising in the Vilna ghettos, gave a rousing speech and quoted the following verse from Psalm 94: “He will repay them for their iniquity and wipe them out for their wickedness.” According to Kovner, this was to be the fate of the German people. In a desperate search for justice, “Nakam” (Hebrew for “Revenge”) was born.

Without warning, ex-SS officers turned up dead on roadsides, had accidents caused by “accidental” mechanical failures, and were quietly poisoned in hospitals. The group continued to grow in numbers, and soon carried out their largest successful operation in 1946 at Stalag 13, a detention center for former SS men in Nuremberg. The plan was carried out by poisoning the bread fed to the prisoners. 1900 German prisoners of war soon fell ill, and an estimated several hundred died. Killings of ex-Nazis continued into the 1950’s with “Revengers” following them into Spain, Latin America, Canada, and anywhere else they fled to hide their fascist past.

Nakam had a thirst for blood that could never be quenched. The group had an ambitious plan to poison the water supply of five German cities: Munich, Berlin, Weimar, Nuremberg, and Hamberg. The proposed number of victims was approximately six million, which mimicked how many Jews were estimated to have died at the hands of Nazis. The plan was foiled days out from its execution thanks to one of the group’s own members who warned the British, saving millions of innocent German citizens from genocide.

The 1960’s and 70’s saw significant unrest in America with counterculture and civil rights movements igniting around the nation. San Francisco in particular was the staging ground and safe haven for one of the most significant struggles for equality in America: The LGBT+ movement. Unfortunately, not everyone was comfortable with the community’s presence in the city by the bay.

Reverend Ray Broshears was a local evangelist who openly practiced a gay lifestyle and was involved in the LGBT+ community. He watched as the amount of attacks against his fellow gay brothers and sisters increased, with the police nowhere to be seen. After being beaten outside his own mission center, Broshears formed the Lavender Panthers (taking inspiration from the Black Panthers who used controversial tactics to fight racial inequality).

The group aimed to protect the community from future attacks, hunt down past offenders who escaped with their crimes, and destroy the stereotype of LGBT+ people being viewed as “cowards”. 21 individuals joined the Panthers and were trained in martial arts and other street fighting techniques. The police did not interfere as long as the members did not carry guns (though Reverend Broshears famously owned a shotgun, which he declared he was not afraid to use). Supposedly, no complaints were ever filed with the police as victims of the Panthers were likely too ashamed to admit they had been attacked by gays and lesbians.

The Bald Knobbers: Watchers of the Wild West

After the American Civil War, Southwest Missouri was plagued by a suffering economic climate and rampant lawlessness. One day a 6′ 6″ and 300+ lbs man by the name of Nathaniel N. Kinney arrived in Taney County in 1883. He despised the anarchy that lay before him. Outlaws ruled, and justice was nowhere to be found.

An unsolved murder on September 22, 1883 caused Kinney to call together 12 county leaders to a secret meeting in order to form a committee to fight the lawless and elect officials who would enforce the law. The Bald Knobbers and their strange masks were soon seen fighting outlaws throughout the plains of Missouri. The group’s good intentions soon turned violent, but the Knobbers’ membership grew into the hundreds by 1885. It was the same year that over 100 of these vigilantes broke into Taney County jail, kidnapped Frank and Tubal Taylor, and promptly hanged them for their vicious crimes committed across the area.

Many founding members left as the violence escalated, but membership continued to skyrocket as numbers reached between 500-1000 Knobbers. With this size, they were the largest crime-fighting organization in the area. They became involved in tackling smaller offenders such as drunks, gamblers, and wife-beaters. Despite their best intentions, the community that had once supported them soon began to resist the Bald Knobbers (even going so far as to found the Anti-Bald Knobbers). Fear reigned after the group killed William Edens and Charley Green, outspoken critics of the Knobbers. Eventually, numerous fighters were arrested with sentences ranging from fines to the death penalty. Kinney himself met his end in an assassination by Billy Miles of the Anti-Bald Knobbers. By 1899, the Bald Knobbers faded into wild west history as one of many vigilante groups that attempted to hold up justice during the era of Manifest Destiny.

Though these groups had the best intentions, it is debatable whether or not justice was truly executed, and whether they actually accomplished their goals. Even if members of Nakam, the Lavender Panthers, or the Bald Knobbers had extraordinary powers, would that make them what we consider “heroes”? Perhaps these true stories of crime-fighting vigilantes serve to remind us that it is not a cape, or a mask that makes a hero. It’s the ideals and choices of individuals and groups that bring about heroic change.