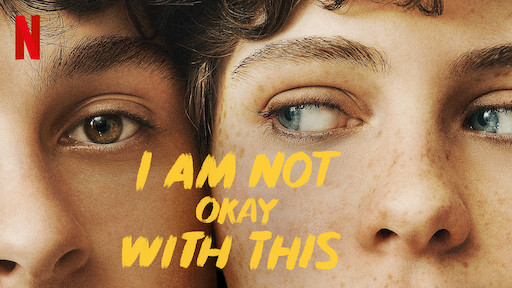 Reviewing the Netflix series “I Am Not Okay With This.”

I will start off by saying if the plot of something is about a main character developing superpowers, I will be 100% invested on watching it. I Am Not Okay With This checks that box and does not disappoint.

The show is narrated by main character Sydney “Syd” Noval, played by Sophia Lillis, who has been given the task of filling out a diary. The guidance counselor feels this would be helpful in dealing with her outbursts of rage. We are introduced to the characters in Syd’s world—Dina, her best and what seems to be only friend; her little brother, who is wise beyond his years; her mother, who is working as many shifts as she can to support her family; and Stan, her neighbor turned confidant.

Similar to most high school students, things are changing for Syd. Her best friend has started dating one of the most popular guys at school, she has gross zits on her leg, and when she gets angry bad things start happening. First someones nose starts bleeding, then a wall is split apart in her house. The coincidences pile up until Syd has to admit to herself that she has some sort of power and no idea how to control it.

We are introduced to Syd’s neighbor Stan played by Wyatt Oleff. He’s an oddball whose confidence is refreshing, even driving around in his broken down car. He and Syd form a relationship of sorts, as it is obvious that he has feelings for Syd, but she is pining after her best friend. At a party the group attends, Stan asks Syd to homecoming, which she accepts. The stories start to collide as Syd runs out of the party after making a move on Dina and being denied. This is another moment where Sydney’s frustration and anxiety start building up, until in the middle of the woods, she lets out a psychic blast that levels the surrounding trees in a 10 food radius. The rain falling allows you to see the blast emanate from Syd, which we had previously not seen. I cannot stop playing the scene over in my head; it was so beautifully done. You can tell this must have been one of the most expensive shots of the show because you see it at least 2 more times and from different angles. It not only shows you how strong Syd’s powers can actually be, but introduces Stan to what she has been dealing with.

Syd tries to tell Stan this wasn’t her but there is no denying it she has powers. The show then decides to do something not many teen dramas do. They progress the plot. With I Am Not Okay With This you don’t see the characters needlessly lying so that they can extend a storyline a few episodes. There seems to be a believable reason for all the lies the characters tell. As soon as Syd knows Stan saw her, she comes clean. She later even explains to him the reason for the freak out was her kissing someone else. He takes this well, understanding that she has feelings for someone else and goes into best friend mode, telling her they need to test her powers.

Like any person dealing with superpowers in a real world Stan looks to comic books for more information. Syd shows up at a bowling alley that Stan works at to explain everything to him. They decide to try and test her powers. Once Stan realizes anger is Syd’s trigger he starts using everything they’ve talked about to make her mad. Sure enough two bowling balls narrowly avoid smashing him. Syd storms out yelling at him how dangerous that was and that she could have killed him. You can tell by the look on the character’s face he hadn’t thought of that before. Wyatt Oleff has great comedic timing for a young actor and left me wanting to learn more about Stan’s life.

Syd runs home but the lights start to flicker and she gets the sense she is being followed. Although she turns around to nothing as she moves on, we see a shadowy figure following her vanish. At school the next day Syd and her group are given detention for varying reasons. In a Breakfast Club-esque scene, the students are in the gym being told the rules for detention. They are then left completely alone (much like any other high school students in detention would be). Syd ends up alone in the library and again she gets the sense someone is in there with her. Although we don’t see it initially, she makes a mess of the library trying to stop whatever is following her. Realizing she’s on camera, she asks Stan and Dina to help her get the security footage. This leads to a hilarious heist sequence involving multiple plans and distractions. They successfully get the footage and when Syd goes to bathroom she overhears Dina’s boyfriend talk about cheating on Dina.

Obviously being the good friend she is, she immediately tells Dina. This is the match that lights the powder keg. Dina’s boyfriend Brad is furious at Syd and somehow gets his hands on her diary. At homecoming, when prom king and queen are announced, Brad drunkenly comes onto stage. He starts talking about Syd’s life, how she is in love with Dina (who may have been about to admit that she felt the same way). Stan tries to stop him but is one shot KO’d with a swift punch to the face. As Brad is about to reveal Syd’s secret she is screaming internally for him to shut up and in that moment his head EXPLODES. Now this was an easily predictable moment as we had earlier seen Syd covered in blood before a flashback but still left me with my jaw on the floor.

In an amazing end to the season the shadowy figure appears to Sydney as she is standing on the edge of a water tower. It tells her that everyone should fear her as the season ends. With that I am absolutely in on season 2. I have no idea where the show is going or what season two will bring but I cannot wait. Is this thing a demon and that’s where her powers came from? Is this an X-Men type scenario and we will be introduced to a whole set of powered teens next season? The show leaves us with so many questions that if it doesn’t get greenlit for season 2, they will have some upset fans on their hands.

I Am Not Okay With This is available on Netflix now.