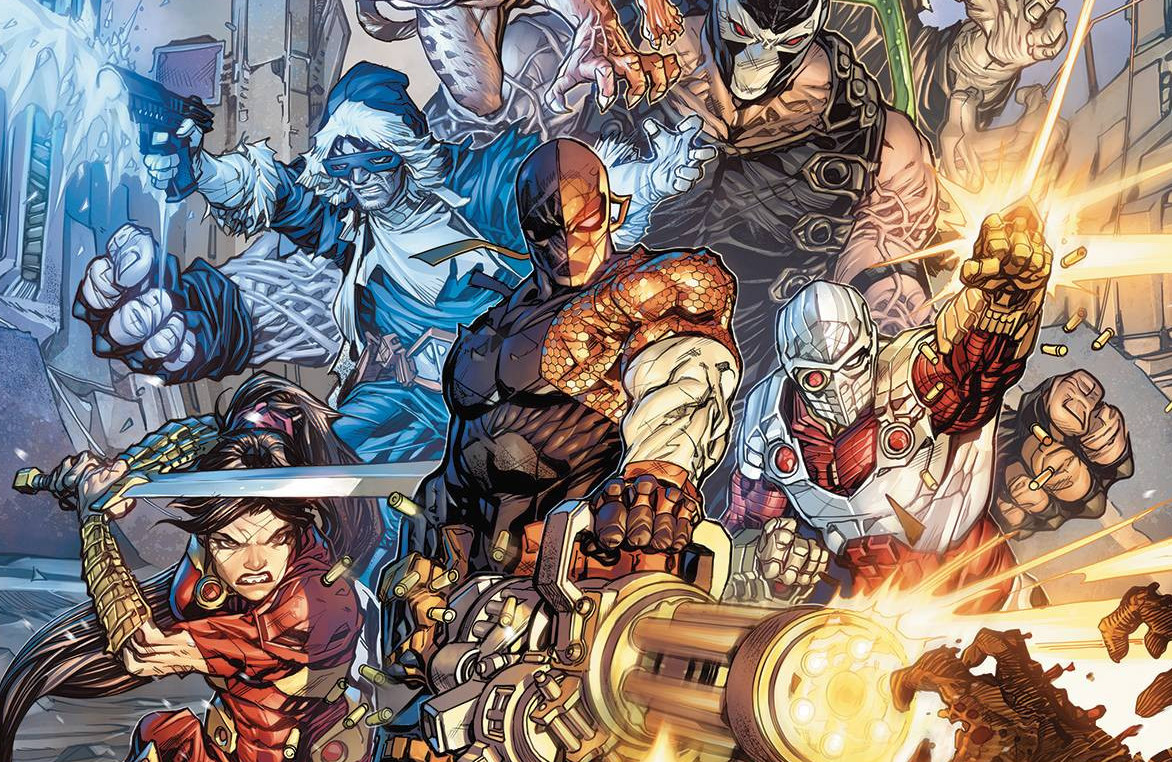 “Brainssss….Brains….” is not something that you will hear in the follow-up to DC’s zombie apocalypse story “DCeased: Unkillables” written by Tom Taylor with art by Karl Mosert.

“Brainssss….Brains….” is not something that you will hear in the follow-up to DC’s zombie apocalypse story “DCeased: Unkillables” written by Tom Taylor with art by Karl Mosert.

The story is separated into chunks following the journeys of Deathstroke and Red Hood. Although the characters stories do not intertwine, I don’t think I could put one over the other. They both had noteworthy moments for the “villain” and “hero”.

Taylor’s choice to have Deathstroke succumb to the infection at first, only to snap out of it later was a great approach. It gives the idea that his body had to figure out how to counteract the equation instead of just being immune to it, which can be a cheap way out for characters that have healing factors. Starting the story this way also gives the reader a small bit of hope that a cure may be possible.

Once Deathstroke recovers the first thing he does is find his daughter, who has locked herself in her apartment. You’d hold yourself in an apartment too if every vision of your future showed zombies eating you. They successfully get her onto the roof and are soon met by Mirror Master who has been sent to track Deathstroke down. He brings them to the Mirror World and warns them they may not want to close their eyes. We are then given an almost whole page spread of hundreds of mirrors filled with images of people infected. This page truly resonated with me as it showed the scale of the virus’s reach. Every mirror in the mirror world leads to a different place and we are seeing all of those places filled with infected humans. The sense of dread is over whelming.

Luckily we have hope in the form of Vandal Savage (words I never thought I would be saying). He is held up on an island miles away from everything with 7 other non-infected villains. The dialogue here is top notch as we get moments of Deathstrokes sarcasm to Vandal and an analogy about tree lobster that Creeper takes a bit literally. I may not be caught up on the Creeper but it feels like DC is trying to push a Deadpool equivalent.

Deathstroke’s story ends with Vandal Savage saying he chose everyone there for a reason. He goes on to say this is not the first extinction event he’s been around for. I know we are told Vandal Savage is immortal but pointing this out really sends the message. This isn’t the first time Vandal has inherited what was left of the earth.

On theother hand, Red Hood goes to the one person who he knows would be working on stopping the virus. When he arrives to the Batcave he finds Bruce, Dick, and Tim laid out on the floor. He digs graves for his family writing a perfect headstone for Bruce, then gets in the Batmobile to track the rest of the living members of the Batfamily. When the computer informs him that, of the 8 Batfamily members in Gotham, only 2 are still living, he takes a pause and moves on to go save the living ones.

He smashes through to Gotham PD which he finds running rampant with these rage zombies, then rescues Cassandra Cain and Commissioner Gordon right before they meet their demise. They all join him in the Batmobile and he informs them his goal right now is to get out of Gotham. We then get one of my favorite points in the comic where after Jason tells Jim that Barbara is not alive, he takes his mask off. This is all that Jim needed for it to click that Bruce Wayne and his wards are the Batfamily. Different Batman lore deals with Commissioner Gordon in different ways. Sometimes we are led to believe he knows who Batman is and doesn’t say anything while other iterations of the character have no idea. I felt this moment was impactful because it showed in this world that Jim had no idea until this one portion of the veil was lifted; then it was obvious to him.

The team finds Barbara as her father needed proof that she was actually gone. Not far from where Barbara’s body is lies the corpse of the Joker. This is another moment that stuck with me due to Jason’s reaction. He feels he should have been the one to kill Joker, and so a defining motivation for his character was stolen from him. They prepare to leave and in a Mad Max-esque fashion, Jason straps the Joker’s body to the front of the Batmobile. He may not have killed Joker but he will get some joy out of the death.

The trio ends up in a Blüdhaven orphanage that they clear the zombies away from. They discover a group of children inside that were left by a hero who has not returned. As the heroes they are, they let the children know they are there to help but with the next issue coming out March 18th titled “NEVER WORK WITH CHILDREN OR ANIMALS,” it seems that may not go well. I will definitely be picking up issue 2 to see where this title goes.

“DCeased: Unkillables” is written by Tom Taylor and art by Karl Mosert, and is available now.

View all posts by Aj Cusello
Skip back to main navigation